Here’s a Pope You Wouldn’t Want

A new TV series has at its centre a young American pope. GÜNTHER SIMMERMACHER took a look at The Young Pope and shares his impressions. 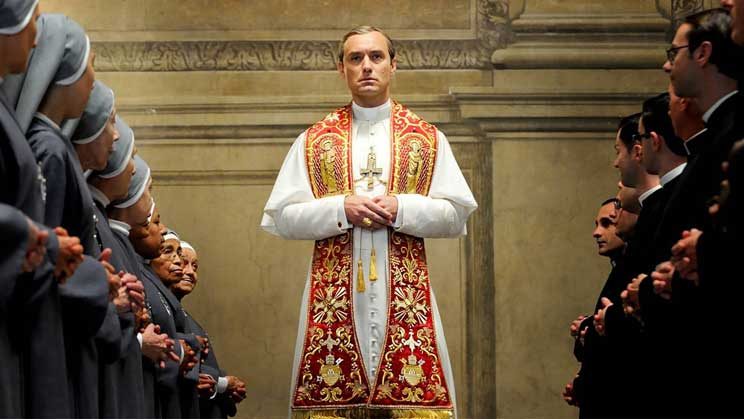 Jude Law as Pius XIII in The Young Pope.

The new American pope stands on the balcony of St Peter’s basilica, and with one extravagant swoop of a gesture, he changes the weather. He addresses a delirious crowd in the square below, speaking in soundbites and with the extravagant body language of an excitable Pentecostal preacher. One almost expects the next line to be an appeal for donations for his ministry, credit cards accepted.

This is how we meet Pius XIII, the 47-year-old American pontiff in the new TV mini-series The Young Pope (parts of which were filmed in Cape Town).

Vaticanistas have much cause to protest that there would be no American pope, never mind a 47-year-old. In real life, the youngest cardinal at present, Tongan Cardinal Soane Mafi, is a ripe 54. The Young Pope has many moments of incongruity, but most of these are the standard ransom for the sake of drama. Catholics will find it difficult to navigate the cavalier manner in which the sacraments are negotiated in order to drive the plot.

Catholics will find it difficult, however, to navigate the cavalier manner in which the sacraments are negotiated in order to drive the plot. Most problematic of these is a scene in which the Vatican’s supine chief confessor sells the seal of the confessional for the pope’s promise of the cardinal’s red hat. It’s a scene that will have many Catholics reach for the off-button.

There are also scenes of heavy-handed humour. In one of these, Sr Mary, the now elderly nun who raised Pius, is seen wearing a T-shirt with the slogan, “I am a virgin — but this is an old shirt.”

Young Pope Pius XIII, played by Jude Law, is an arrogant, morally compromised character, drawn more from the portraits of medieval popes who wielded absolute power than reflecting the more collaborative modern pontiff who at least adheres to canon law. Pius will doubtless become ever more high-handed as the series progresses. This might raise an interesting question for us:  Who polices a pope who transgresses boundaries?

This fictional pope is a supercilious, vindictive hypocrite with a loose grasp on theology. But he also shows the redeeming features required to render him more than just one-dimensional. The same goes for the crafty secretary of state, played majestically by Silvio Orlando.

The exterior and interior struggles of and between these two men will thread through the series. The trouble is, it is difficult to really care for either of them, nor for Sr Mary (played by a wooden Diane Keaton), and certainly not for the American cardinal who was “cheated” out of the papacy, played by the delightfully scene-stealing James Cromwell.

The Young Pope is gorgeous to look at, and the music is, well, divine. But it is not divinely inspired. This series satirises the centre of the Catholic Church. For all the good punches it lands — the Roman curia is an easy target for those — this TV series is not pro-Catholic. Whether it is anti-Catholic will be for the individual viewer to decide.

Here the Roman curia serves as the theatre for the universal characteristics of politics: lust for power, patronage, betrayal, ruthlessness, hypocrisy, dishonesty, manipulation, avarice, corruption and so on. The seven deadly sins are played out here as they might be anywhere else; the Vatican is not immune to the frailties of the human condition, after all.

But The Young Pope occasionally also allows for the redeeming side of humanity. So we see the scheming secretary of state in moments of tenderness as he cares for a disabled boy.

Ultimately, the show’s primary aim is to deliver entertainment, not to make an excess of profound points about the Catholic Church, never mind offer documentary-like accuracy. As a portrayal of a centre of power, it is more like the fanciful drama of House Of Cards than the more sober (and far superior) series The West Wing.

The Young Pope is a good reminder for Catholics to be grateful that our Holy Father is Pope Francis, not Jude Law’s Pius XIII.