Why We Must Build A NEW Culture of Life 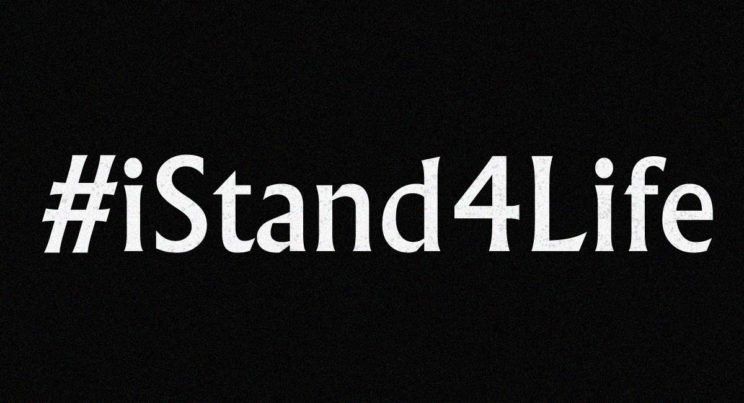 The Christian Church has opposed abortion since the beginning. Professor MICHAEL OGUNU outlines the history of the Christian rejection of abortion and euthanasia, and why the fight against these is important.

Human life is sacred because from its beginning it involves “the creative action of God”.

The life of every individual, from its very beginning, is part of God’s plan.

The Second Vatican Council, in a passage which retains all its relevance today, forcefully condemned a number of attacks against human life:

“Whatever is opposed to life itself, such as any type of murder, genocide, abortion, euthanasia, or willful self-destruction, whatever violates the integrity of the human person, such as mutilation, torments inflicted on body or mind, attempts to coerce the will itself; whatever insults human dignity, such as subhuman living conditions, arbitrary imprisonment, deportation, slavery, prostitution, the selling of women and children; as well as disgraceful working conditions, where people are treated as mere instruments of gain rather than as free and responsible persons; all these things and others like them are infamies indeed.

“They poison human society, and they do more harm to those who practise them than to those who suffer from the injury. Moreover, they are a supreme dishonour to the Creator” (Gaudium et Spes, 27).

The life of every individual, from its very beginning, is part of God’s plan.

This disturbing state of affairs, far from decreasing, is expanding. With new prospects opened up by scientific and technological progress there arise new forms of attacks on the dignity of the human being.

Among all the crimes which can be committed against life, procured abortion has characteristics making it particularly serious and deplorable.

The Second Vatican Council defines abortion, together with infanticide, as an “unspeakable crime”. 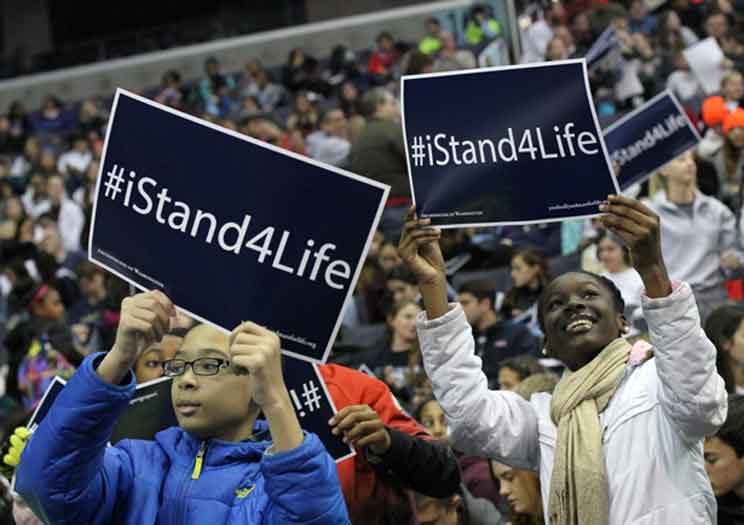 All together, we must build a new culture of life, Prof Michael Ogunu argues, explaining the history of the Church’s stand against abortion and euthanasia, and how they relate to the challenges of our times. (Photo: Gregory Shemitz/CNS)

God’s commandment is that no human being may deliberately take away innocent human life. What life could be more innocent than that of the unborn child? Deliberate abortion is therefore always gravely sinful.

The embryo or foetus possesses its fundamental right to life from the moment of conception. From that moment the foetus is already provided with all the genetic elements which will shape its future development as an adult human person.

To use the language of genetics, the embryo, from the instant of the meeting of the mother and father cells, is already equipped with the entire “programme” of its future physical characteristics, right down to the minutest detail (including its unique and identifying fingerprints), as well as of its basic mental capacity and personality traits. Everything that education and environment will later have to work on is already present in the embryo.

Each single embryo, even though so small as to be invisible to the naked eye, is unique and unrepeatable.

From earliest times, Christians sharply distinguished themselves from surrounding pagan cultures by rejecting abortion and infanticide.

The earliest widely used documents of Christian teaching and practice after the New Testament in the 1st and 2nd centuries, the Didache (Teaching of the Twelve Apostles) and Letter of Samadas, condemned both practices, as did early regional and particular Church councils.

To be sure, knowledge of human embryology was very limited until recent times. Many Christian thinkers accepted the biological theories of their time, based on the writings of Aristotle (4th century BC) and other philosophers.

Aristotle assumed a process was needed over time to turn the matter from a woman’s womb into a being that could receive a specifically human form or soul. The active formative power for this process was thought to come entirely from the man — the existence of the human ovum (egg), like so much of basic biology, was unknown.

These biological theories, which we now know to be mistaken, never changed the Church’s common conviction that abortion is gravely wrong at every stage.

In the 5th century AD this rejection of abortion at every stage was affirmed by the great bishop-theologian St Augustine.

He held that human knowledge of biology was very limited, and he wisely warned against misusing such theories to risk committing homicide.

He added that God has the power to make up all human deficiencies or lack of development in the resurrection, so we cannot assume that the earliest aborted children will be excluded from enjoying eternal life with God.

In the 13th century, St Thomas Aquinas made extensive use of Aristotle’s thought, including his theory that the rational human soul is not present in the first few weeks of pregnancy. But he also rejected abortion as gravely wrong at every stage, observing that it is a sin “against nature” to reject God’s gift of a new life.

During these centuries, theories derived from Aristotle and others influenced the grading of penalties for abortion in Church law. Some canonical penalties were more severe for a direct abortion after the stage when the human soul was thought to be present. However, abortion at all stages continued to be seen as a grave moral evil.

From the 13th to 19th centuries, some theologians speculated about rare and difficult cases where they thought an abortion before “formation” or “ensoulment” might be morally justified. But these theories were discussed and then always rejected, as the Church refined and reaffirmed its understanding of abortion as an intrinsically evil act that can never be morally right.

In 1827, with the discovery of the human ovum, scientists increasingly understood that the union of sperm and egg at conception produces a new living being that is distinct from both mother and father.

Modem genetics demonstrated that this individual is, at the outset, distinctively human, with the inherent and active potential to mature into a human foetus, infant, child and adult.

From 1869 onward the obsolete distinction between the “ensouled” and “unensouled” foetus was permanently removed from canon law on abortion.

Secular laws against abortion were being reformed at the same time and in the same way, based on secular medical experts’ realisation that “no other doctrine appears to be consonant with reason or physiology but that which admits the embryo to possess vitality from the very moment of conception” (American Medical Association, “Report on Criminal Abortion”, 1871).

Thus modern science has not changed the Church’s constant teaching against abortion, but has underscored how important and reasonable it is, by confirming that the life of each individual of the human species begins with the earliest embryo.

The Trouble With Euthanasia

At the other end of life’s spectrum, men and women find themselves facing the mystery of death.

When the prevailing tendency is to value life only to the extent that it brings pleasure and wellbeing, suffering seems like an unbearable setback, something from which one must be freed at all costs. Death is considered “senseless” if it suddenly interrupts a life still open to a future of new and interesting experiences.

By using highly sophisticated systems and equipment, science and medical practice today are able not only to attend to cases formerly considered unbeatable and to reduce or eliminate pain, but also to sustain and prolong life even in situations of extreme frailty.

In this context the temptation grows to have recourse to euthanasia, that is, to take control of death and bring it about before its time, “gently” ending one’s own life or the life of others. In reality, what might seem logical and humane, when looked at more closely, is seen to be senseless and inhumane.

Here we are faced with one of the more alarming symptoms of the “culture of death” which is advancing above all in prosperous societies, marked by an attitude of excessive preoccupation with efficiency and which sees the growing number of elderly and disabled people as intolerable and too burdensome.

These people are very often isolated by their families and by society, which are organised almost exclusively on the basis of criteria of productive efficiency, according to which a hopelessly impaired life no longer has any value.

Euthanasia must be distinguished from the decision to forgo so-called “aggressive medical treatment”, in other words, medical procedures which no longer correspond to the real situation of the patient, either because they are by now disproportionate to any expected results or because they impose an excessive burden on the patient and his family.

In such situations, when death is clearly imminent and inevitable, one can in conscience “refuse forms of treatment that would only secure a precarious and burdensome prolongation of life, so long as the normal care due to the sick person in similar cases is not interrupted”, as the Congregation for the Doctrine of the Faith put it in 1980.

To forgo extraordinary or disproportionate means is not the equivalent of suicide or euthanasia; it expresses acceptance of the human condition in the face of death.

Among the questions which arise is the use of various types of painkillers and sedatives for relieving the patient’s pain when this involves the risk of shortening life.

Pope Pius XII affirmed that it is licit to relieve pain by narcotics, even when the result is decreased consciousness and a shortening of life, “if no other means exist, and if, in the given circumstances, this does not prevent the carrying out of other religious and moral duties”.

In such a case, death is not willed or sought, even though for reasonable motives one runs the risk of it. There is simply a desire to ease pain effectively by using the analgesics which medicine provides. All the same, “it is not right to deprive the dying person of consciousness without a serious reason”.

Euthanasia is a grave violation of the law of God, since it is the deliberate and morally unacceptable killing of a human person.

The value of democracy stands or falls with the values which it embodies and promotes. The basis of these values cannot be provisional and changeable majority opinions, but only the acknowledgment of an objective moral law, the natural law written in the human heart.

Even in participatory systems of government, the regulation of interests often occurs to the advantage of the most powerful, since they are the ones most capable of manoeuvring not only the levers of power but also the formation of consensus. Democracy easily becomes an empty word.

Laws which legitimise the direct killing of innocent human beings through abortion or euthanasia are in complete opposition to the inviolable right to life proper to every individual.

What is urgently called for is a general mobilisation of consciences and a united ethical effort to activate a great campaign in support of life.

Prof Michael Ogunu is the supreme chancellor of the Order of the Knights of St Mulumba in Nigeria and coordinator of the Fatima Apostolate in English-speaking Africa.

How Are We to Read the Bible?

In a homily a priest advised us to read the Bible from the perspective of the Church. I can see...