The Southern Cross’ pilgrimage to Portugal and Spain in May was accompanied by several saints, as GÜNTHER SIMMERMACHER explains.

Our primary focus was on Our Lady — and through her always on her Son — but on our pilgrimage to Fatima and Avila, and other places in Portugal and Spain, we were accompanied by a number of other saints. Mary is, of course, the greatest saint of them all, and The Southern Cross pilgrimage in May was dedicated to her in celebration of the centenary of her apparitions at Fatima. Suitably, the first and final Masses of our pilgrimage were celebrated in churches dedicated to Our Lady.

Immediately after our arrival in Lisbon we had our opening Mass in the city’s cathedral of St Mary Major (though the locals call it simply the Sé), and we closed the pilgrimage in Madrid’s Redemptorist church of Our Lady of Perpetual Succour, a parish church that offers nine Sunday and six weekday Masses.

Mass in the church of St Nicholas in Santarém, Portugal, with a statue of Our Lady of Fatima to the right of the sanctuary. (All photos: Günther Simmermacher)

As may be expected, the presence of Our Lady of Fatima was evident throughout our travels. We first spotted her in Lisbon’s cathedral, the day after at Mass in Santarém’s beautiful church of São Nicolau, and later in Spain. And when Our Lady was not there under the Fatima title, then she appeared in some guise or other in every church we visited.

Some of these titles were new to us, such as Our Lady of Sonsoles, the name of a sanctuary in Avila. It is a strange name that borrows from an exclamation made by locals, “There is the sun”, when a statue of the Virgin Mary was discovered after being hidden during the Muslim occupation.

The name of Madrid’s cathedral, Our Lady of Almudena, has a similar background. In 712, as the Muslims invaded the Iberian peninsula, the villagers of what would become the great city of Madrid hid a statue of the Blessed Virgin in a wall of the citadel (in Arabic, al-Mudayna). Over time the location was forgotten, but after the reconquest of Madrid in 1083, the statue was miraculously found in the wall. Our Lady of Almudena thus became Madrid’s patron, and the statue is displayed in the cathedral that bears its name. 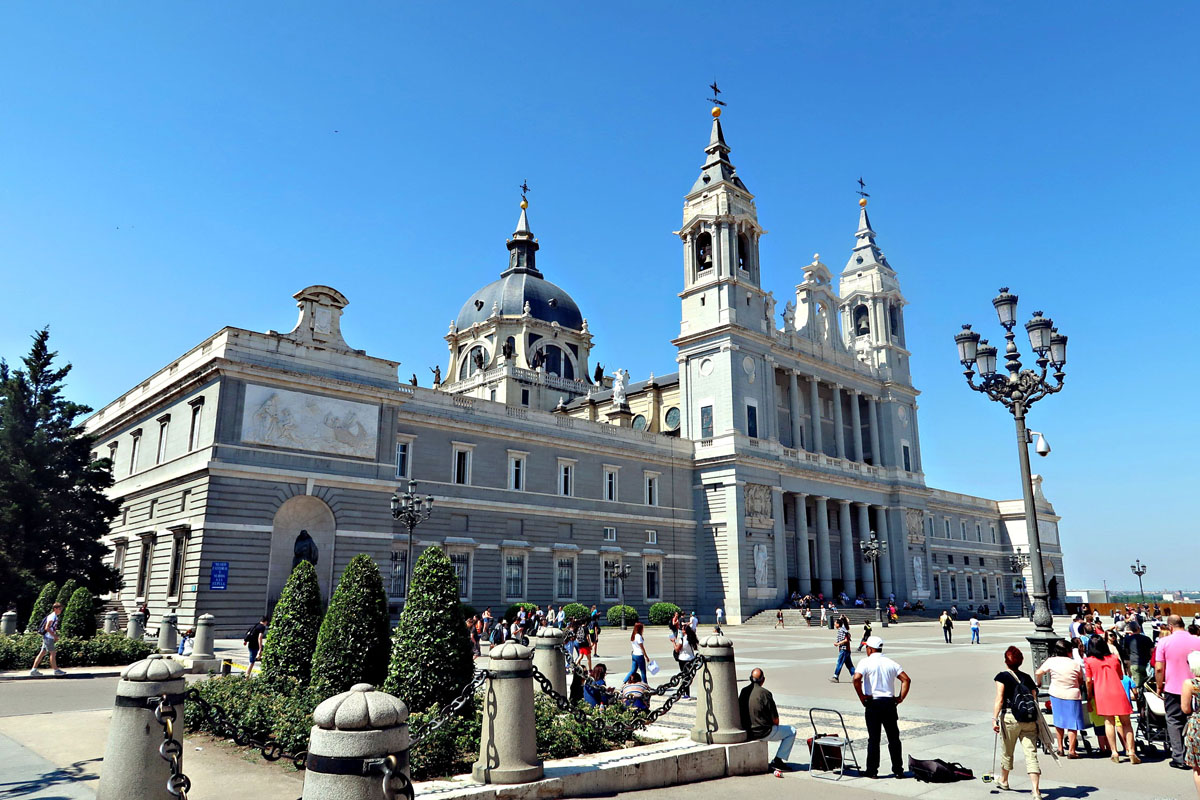 Madrid’s cathedral of Our Lady of Almudena.

But back to the saints who accompanied us. Two of the three children Our Lady appeared to between May and October 1917, Ss Francisco and Jacinta, were canonised in Fatima by Pope Francis just over a week before our arrival there. Of course we had time to get to know the two, and their older cousin, Bl Lúcia dos Santos, during our time in Fatima.

On a traffic circle as one enters Fatima, a large sculpture shows the three children leading their sheep to the dos Santos family’s field of Cova da Iria, where five of the six apparitions took place. The field is now the sanctuary of Fatima, with the Chapel of the Apparition on the spot where Our Lady appeared, and the basilica of Our Lady of the Rosary, which holds the tombs of the three children. The children were not from the small town of Fatima but from a small nearby village, Aljustrel (the prefix “al” in Portuguese and Spanish names, incidentally, denotes a Muslim root). There we visited the beautifully preserved homes of the children. 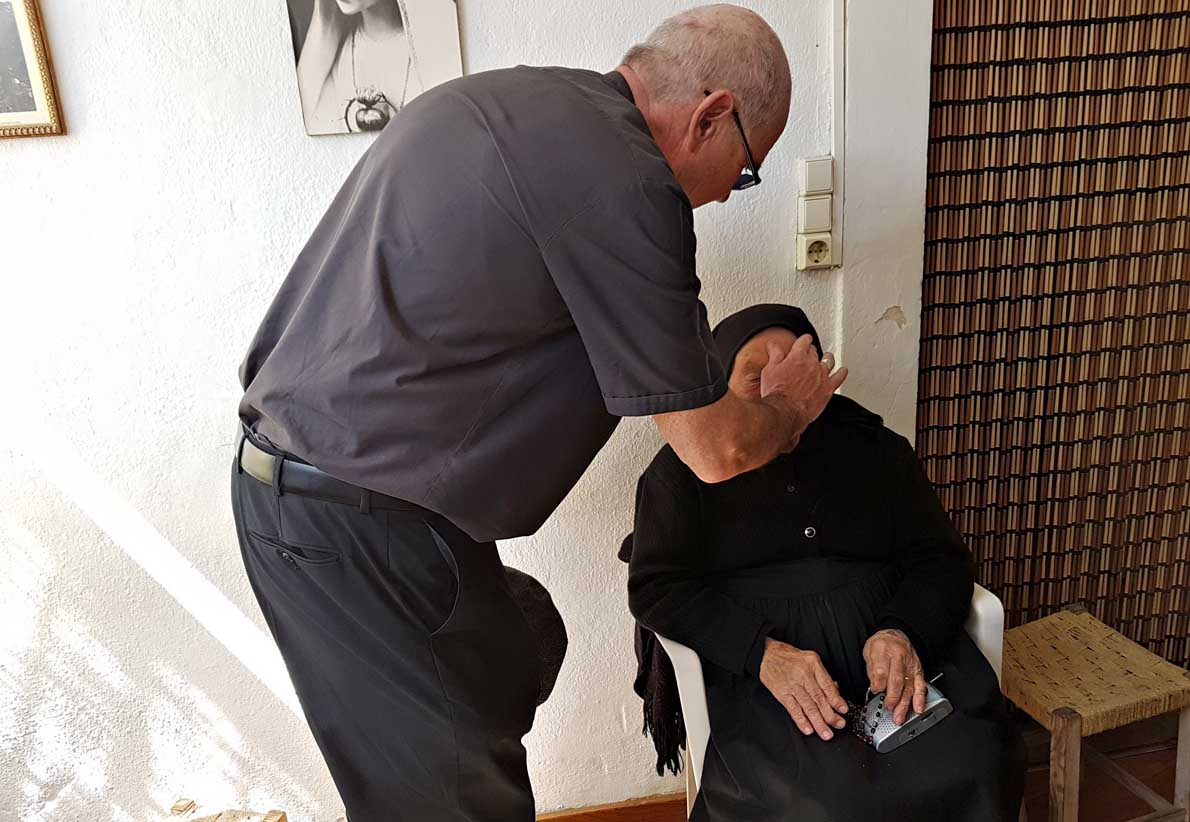 We also met the 97-year-old niece of Bl Lúcia, who most days sits in a room opposite the dos Santos house, praying the rosary and meeting pilgrims. Very alert even at her age, she recognised the ecclesiastical position of our spiritual director, Archbishop Stephen Brislin of Cape Town, and asked him for an episcopal blessing.

The children’s parish church was dedicated to St Anthony. The saint is better known by the nomenclature which refers to the northern Italian city of his death and burial. But, unless you are the kind of person who cheers for Sporting Lisbon in a Benfica bar, you don’t want to call him St Anthony of Padua in Portugal, where he is called St Anthony of Lisbon.

St Anthony is everywhere in Portugal and Spain, as he is in Italy. Almost every church we visited had an altar to St Anthony, or at least a statue of him, always holding the Christ-child. Of course, he features prominently among the statues of saints that preside on the great colonnade at the Fatima sanctuary.

After Mass in Lisbon’s Sé, which holds the original font of St Anthony’s baptism in 1195, we had an opportunity to visit and pray in the crypt of the very nearby church of St Antonio that marks the birthplace of the saint. 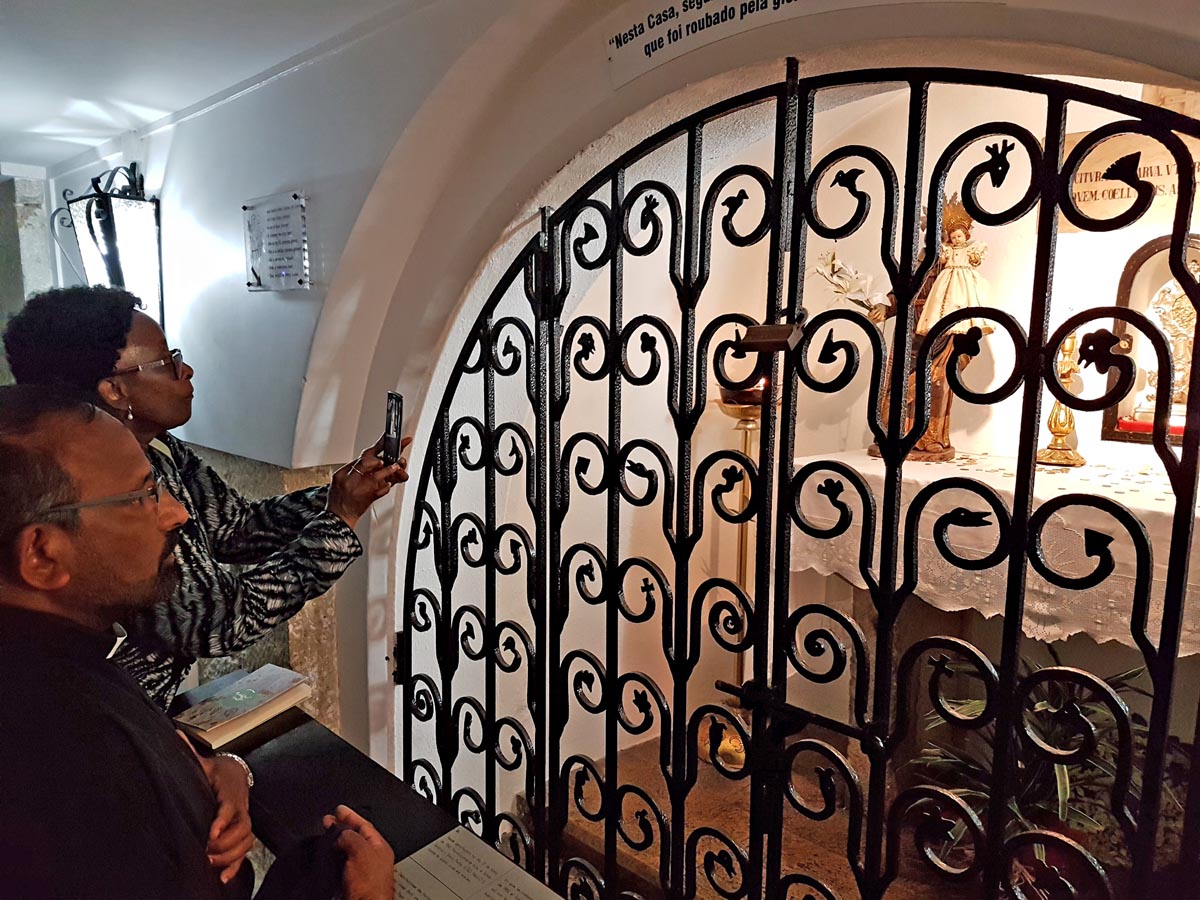 As one enters the crypt of St Anthony’s birth, the pilgrim is invited to kneel for prayer on a broad prie-dieu (before or after taking the obligatory photos; that is optional). This is the kneeler which was used by St John Paul II when he visited the church in 1982. So the savvy pilgrim will make it a point of kneeling in the middle of the prie-dieu, so as to pray in the exact place on which the saintly pope once did the same.

St John Paul was another steady companion on our journey. This owed mainly to his 1982 visits to Portugal in May and Spain in November, the itineraries of which included almost all the places of ours.

The main event of that papal trip was St John Paul’s visit to Fatima during which he presented the bullet from the previous year’s assassination attempt to the sanctuary.

The pope attributed his survival of the 1981 shooting in St Peter’s Square to Our Lady of Fatima, whose feast day it was that day.

St John Paul, of course, was the Marian pope — even his motto, “Totus tuus” (All For You), was dedicated to her. The bullet is now in the crown of the original statue of Our Lady of Fatima, which resides in the sanctuary’s museum.

His 1982 trip to Spain marked the 400th anniversary of the death of St Teresa of Avila, the great saint to whom we dedicated the second half of our pilgrimage by visiting the places of her birth and activity in Avila, and death and tomb in Alba de Tormes. 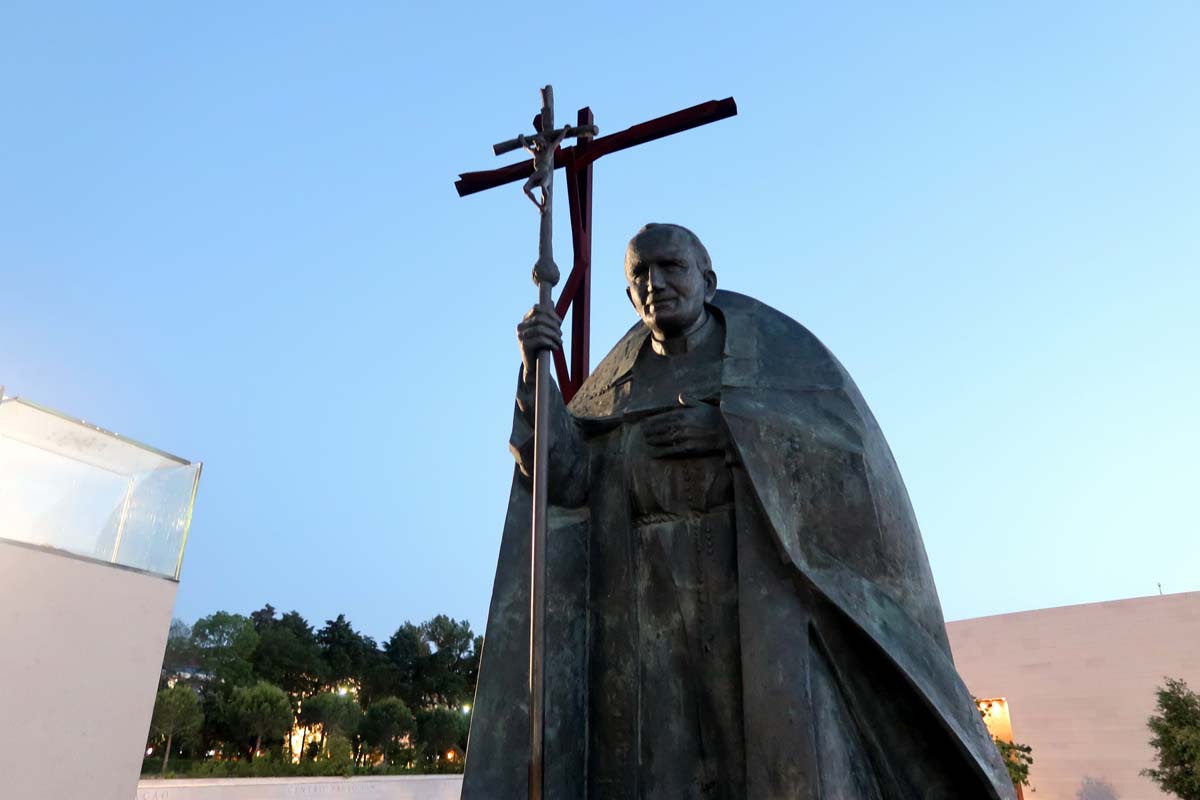 So we kneeled where St John Paul kneeled in Lisbon, encountered him in the form of big sculptures in Fatima and Alba de Tormes, and saw a plaque dedicated to him on the wall of Incarnation Convent in Avila.

In Fatima, my friend José Camara — the donor of more than a thousand statues of Our Lady of Fatima to parishes and schools who came especially from his home in Cascais to meet our group — showed me the rooms where John Paul II and other popes, including Pope Francis, stayed on their visits to Fatima in the modest Casa Senhora do Carmo hotel, right next to the sanctuary.

In 1982 John Paul also visited Coimbra, in north-western Portugal, to address the university there, one of Europe’s five oldest. On our itinerary, Coimbra was a place of intersection where several threads of our itinerary came together.

This was the city the young Augustinian monk Fernando Martins de Bulhões moved to from Lisbon. There he met visiting friars from the new-fangled Franciscan order, then only 11 years old. Fernando was so inspired by their evangelising fervour that he sought and was given permission to transfer his vows to the order founded by Francis of Assisi. With a new order, Fernando also took a new name: Anthony, after St Anthony of Egypt.

More than 700 years later, another significant transfer of vows took place at Coimbra. 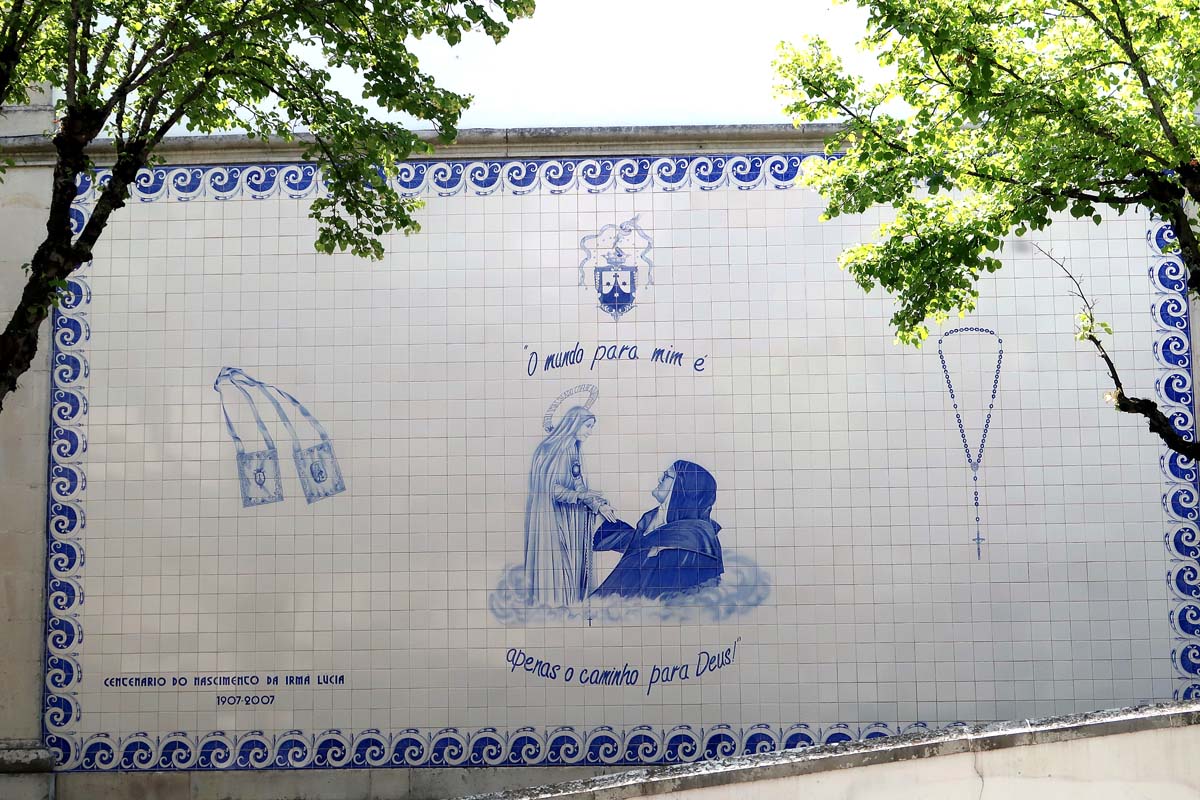 A tiled wall picturing Our Lady and Sr Lucia outside the Carmelite convent in Coimbra, Portugal.

The surviving member of the three visionary children of Fatima, Lúcia, had entered the Sisters of St Dorothy in Porto, making her first vows in 1928. Later she moved to a convent across the border in Spain.

That order was not a good fit for Sr Lúcia, who sought the seclusive, contemplative life. So in 1948 she went to Coimbra to join, with papal permission, the Discalced Carmelite convent there.

Having taken the not very snappy religious name Sr Maria Lúcia of Jesus and the Immaculate Heart, she stayed at the convent of contemplatives for the rest of her life, until her death at 97 in February 13, 2005 — less than two months before St John Paul II died.

Of course our group visited the convent, after Mass in Coimbra’s impressive church of Santa Justa (where we saw, naturally, a statue of St Anthony).

In the Carmelite convent chapel of Coimbra there is a different representation of Our Lady of Fatima from that we know so well. Flanked by Ss Francisco and Jacinta, she is the Immaculate Heart of Mary. Her face is modelled on the descriptions given by Sr Lúcia to the artist. 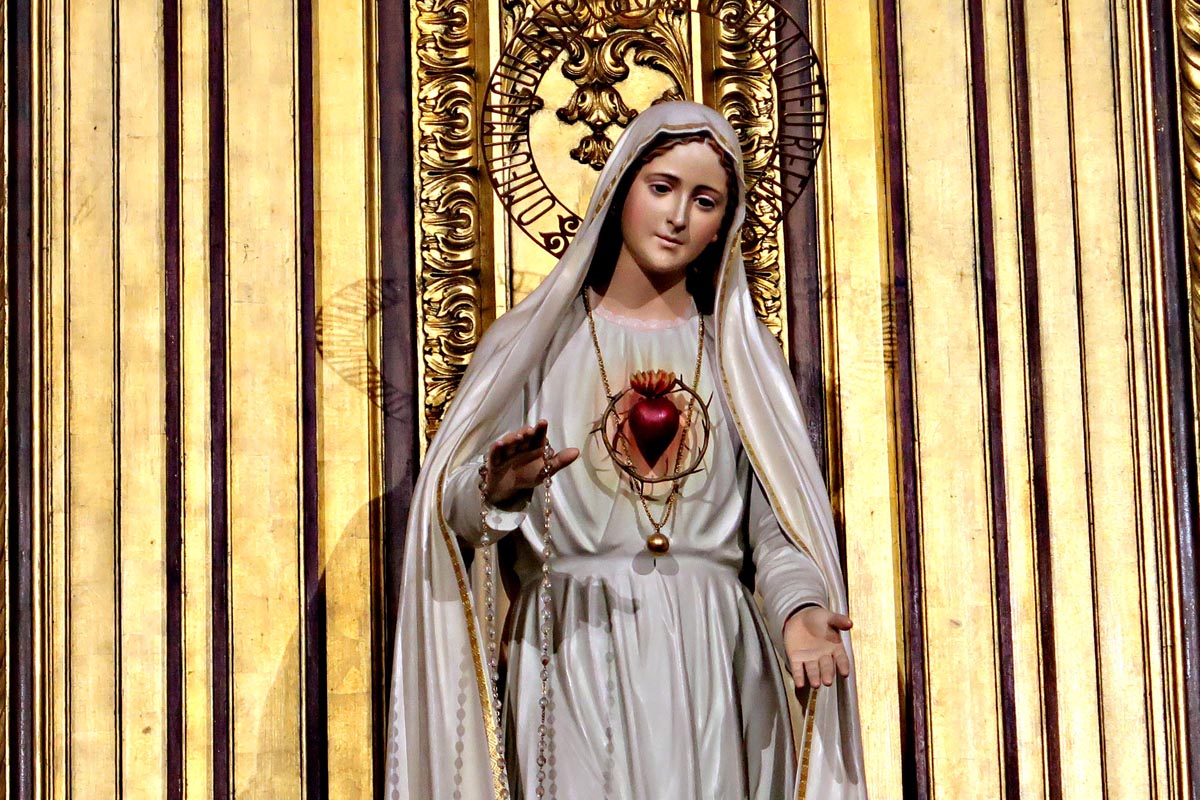 The Immaculate Heart of Mary on a statue in the Carmelite convent in Coimbra, Portugal, where Bl Lucia dos Santos died in 2005. The face was modelled after a description given by Sr Lucia.

On the altar is a statue of St Teresa of Avila, whom we’d visit over the following two days. St Teresa was, with St John of the Cross, the originator of the Discalced Carmelites, the order which the surviving Fatima visionary decided to join.

And the convent where that visionary died was named after — you guessed it — St Teresa. In Coimbra the threads of our pilgrimage indeed came together.

The Southern Cross in association with Radio Veritas will repeat this pilgrimage in October, to be led by Fr Brian Mhlanga OP. For details see www.fowlertours.co.za/fatima