In the Footsteps of a Great Saint

The Southern Cross’ recent pilgrimage to Fatima also went to the places of the great St Teresa of Avila in Spain. In the fourth and final part of his series on the pilgrimage, GÜNTHER SIMMERMACHER revisits Avila and Alba de Tormes.

A few hours could have made the difference about whether St Teresa of Avila died on October 4 or on October 15. And on that cheerful note, our series of articles on the Southern Cross’ pilgrimage to Portugal and Spain takes us to the small Spanish town of Alba de Tormes. 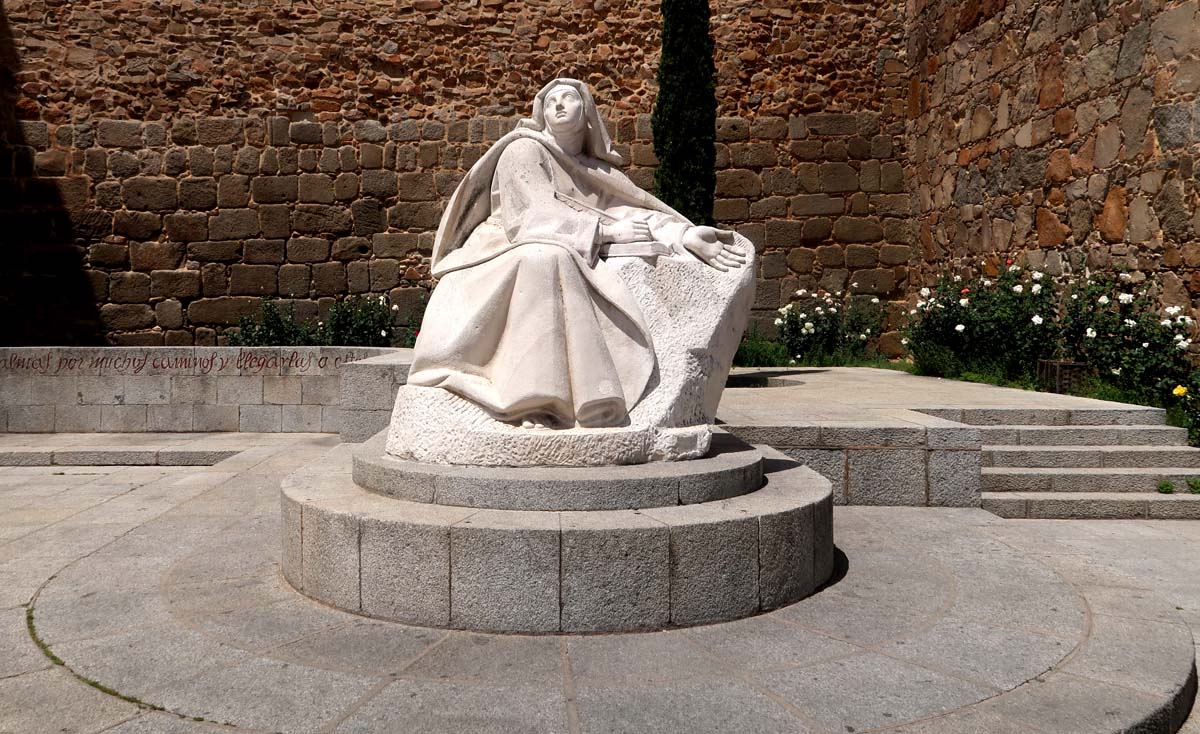 St Teresa depicted in a monument outside the city walls of Avila. (All photos: Günther Simmermacher)

Located on the river Tormes, Alba is near the great city of Salamanca, where our group spent a very agreeable night. Salamanca, a city of great history, has one of Europe’s five oldest universities and two cathedrals: the Old and the New (which is also old). Its historic centre is a UNESCO World Heritage Site, and a small group of us was fortunate to be shown some of it at night by Siyanda Mncwango, a bright South African seminarian studying at Salamanca’s Pontifical University to become a Missionaries of Mariannhill priest.

But let us now proceed to Alba de Tormes. Some 500 years ago, Alba de Tormes was an important centre of a dukedom, with 22,000 inhabitants and 18 churches. Today it’s an agricultural town of 5,400 which draws a few pilgrims and tourists thanks to the still active convent of the Annunciation in which St Teresa of Avila died in 1582.

The great Carmelite had arrived there 15 days earlier to visit the convent which she had founded 11 years before, and which is still active today. Suddenly Teresa was taken very ill. While she was ailing, she asked that her sickbed be installed above the altar, so that she could be close to the Eucharist. She stayed there until just before her death.

Her tomb was eventually installed in that spot, looming above the altar; one can see it behind a grille as one enters the convent church. The tomb can also be viewed up close, with the relics of St Teresa’s incorrupt heart and left arm on either side of the sarcophagus. Other possessions of St Teresa and her close associate, St John of the Cross, are on display in the convent’s museum.

St Teresa was no conventional woman, and the timing of her death was suitably extraordinary. 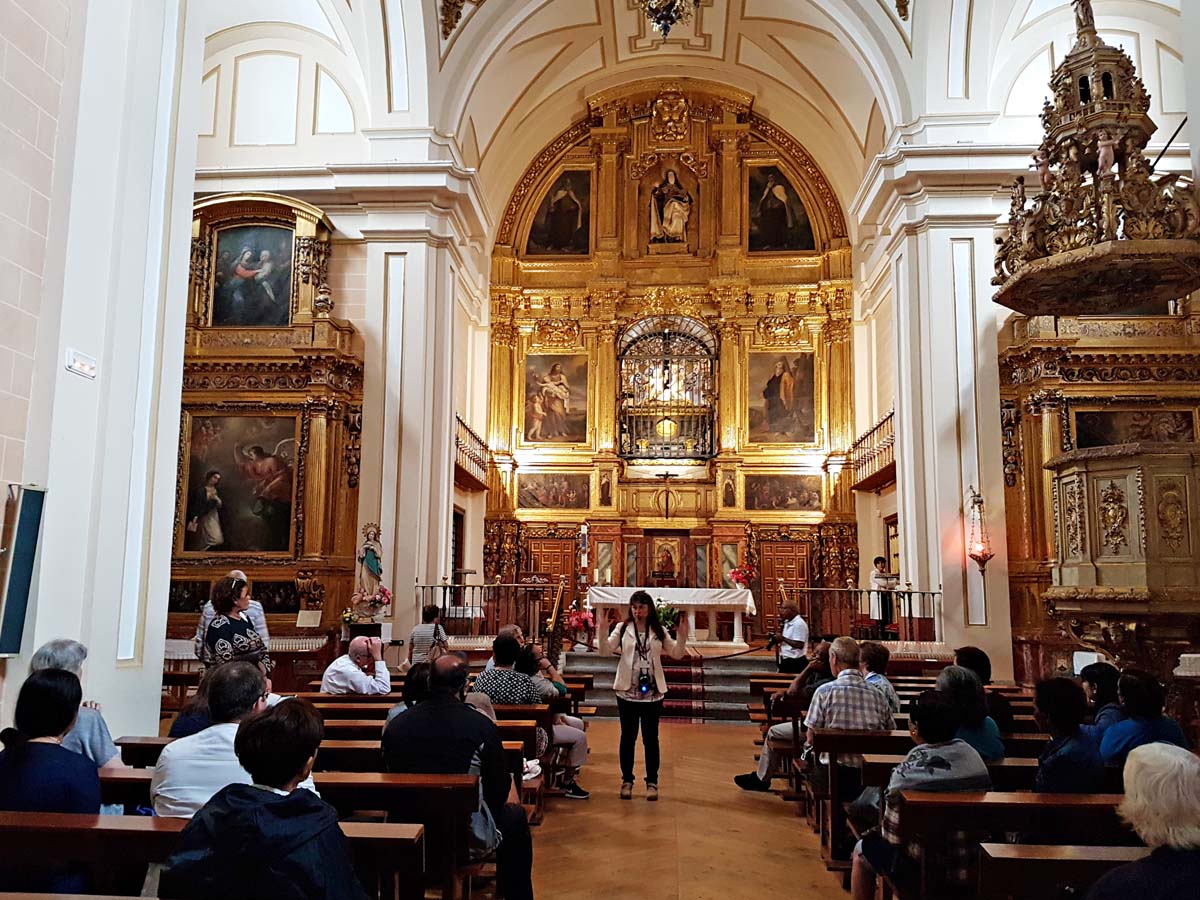 The convent church of the Annunciation in Alba de Tormes, with St Teresas tomb above the altar.

The recorded date of her death is October 4, 1582. That was the day on which Spain and other Catholic countries switched from the Julian to the Gregorian calendar. So the day after Thursday, October 4 was Friday, October 15. October 15 is St Teresa’s feast day, even though the 4th is her official date of death.

It’s not clear whether St Teresa died before or after midnight, so by our reckoning the date of her death could be either October 4 or October 15. The official date is the 4th but — just to confuse things — the liturgical practice at the time counted the change of dates as of sunset, so according to that rule she died on the 15th, whether midnight had struck or not.

October 15 is St Teresa’s feast day, even though the 4th is her official date of death. Normally a saint’s feast day falls on the anniversary of their death, except when it clashes with another major feast. But October 4 was already the feast day of St Francis of Assisi (who actually died on October 3 but was given the 4th as his feast because of the liturgical rule mentioned above). So St Teresa couldn’t share St Francis’ feast and was allocated the day after her official date of death: not October 5, which didn’t exist that year, but October 15.

Now, with all that calendar excitement dispensed with, take a deep breath…

After her death, a long and bitter dispute broke out between Alba and Avila about which city would retain St Teresa’s remains. Both obviously had perfectly good claims. In the end, Alba won because of the intervention of its very powerful duke.

The quirks of geography meant that we visited the location of St Teresa’s death before her birthplace, the magnificent medieval city of Avila.

St Teresa was born there on March 28, 1515 as Teresa Sánchez de Cepeda y Ahumada. The house of her birth is now a church, built in the 17th century, with an ornate chapel marking the spot where the future saint came into the world. As a young woman Teresa experienced religious ecstasies which she said brought her into perfect union with God. Later she reported distressing visions of Jesus in bodily form.

Her grandfather was a Jewish convert — though likely not by choice — who was condemned by the Spanish Inquisition for reverting to Judaism. But her father, Alonso, bought a knighthood and successfully assimilated into Christian society. Her mother, a very pious Christian, died when Teresa was only four, an event that brought the child close to the Blessed Virgin.

As a young woman Teresa experienced religious ecstasies which she said brought her into perfect union with God. Later she reported distressing visions of Jesus in bodily form. 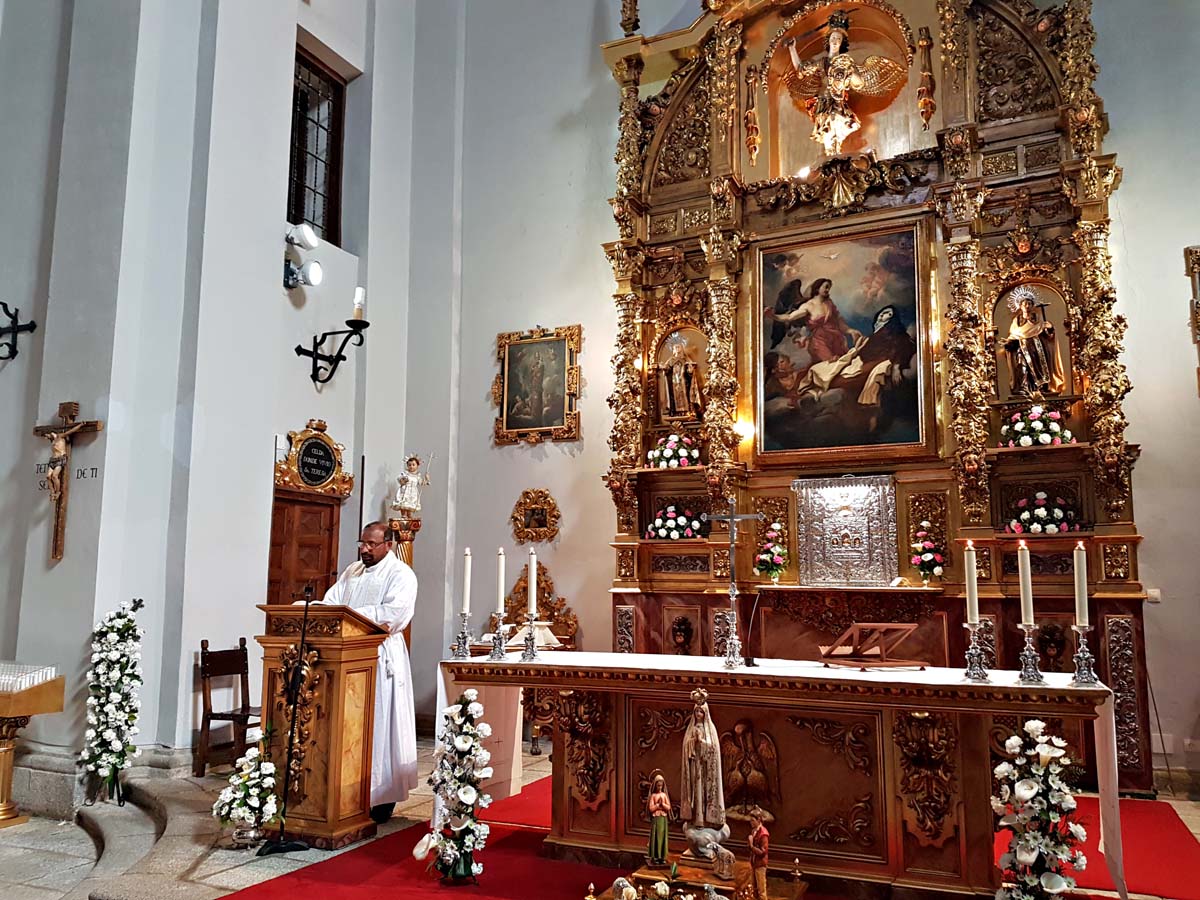 Carmelite Father Davis Mekkattukkalam preaches in the church of Incarnation convent in Avila. A statue of Our Lady of Fatima with Ss Francisco and Jacinta stands before the altar.

Teresa was also concerned about laxness among her fellow Carmelite Sisters, who she thought were becoming too worldly. It was the time of the Reformation being in full swing — Martin Luther had started it just two years after Teresa’s birth. So Teresa was very much part of the Counter-Reformation, and her role in it was to transform the Carmelite order. She implemented a strict regime geared towards contemplation and prayer, with the nuns living in poverty and seclusion from the world.

In all that she worked very closely with St John of the Cross, the great mystic author. The Carmelite faction they led were called the Discalced (barefoot) Carmelites, the others the Calced Carmelites. The two Carmelite factions split formally only after the deaths of Teresa and John.

After initial opposition, Teresa’s way earned the favour of bishops and secular leaders. But the Calced Carmelites weren’t pleased, and in 1576 even managed to exile Teresa, who obeyed. After three years Teresa was released from exile, at the intervention of King Felipe II. Then Pope Gregory XIII (after whom the Gregorian calendar is named) also gave her his support, which enabled Teresa to establish more convents. Altogether she founded 17 convents throughout Spain. Like Sr Lucia, the Carmelite nuns we know in South Africa are the Discalced Carmelites.

Our visit to St Teresa had a connection to the focal point of our pilgrimage, which was the centenary of the apparitions at Fatima: some 20 years after the apparitions, the oldest of the three visionaries, Bl Lucia dos Santos, joined the Carmelite order in St Teresa convent in Coimbra, which we visited before coming to Spain. Like Sr Lucia, the Carmelite nuns we know in South Africa are the Discalced Carmelites.

For our group the visit to the places of St Teresa and St John of the Cross had a special significance: among us was a Carmelite priest, Fr Davis Mekkattukkalam of Port Elizabeth. For the two Masses in Alba de Tormes and Avila, spiritual director Archbishop Stephen Brislin invited Fr Davis to preach on Carmelite spirituality and his own path to the priesthood in the order. It was indeed special to have a Carmelite priest leading the celebration of the Eucharist in such important places in the life of his order

His vocation story is a journey of unexpected turns which some may call coincidence but which we Christians would ascribe to God’s plan.

It was indeed special to have a Carmelite priest leading the celebration of the Eucharist in such important places in the life of his order: the convent church in Alba, beneath the tomb of St Teresa, and in the church of Incarnation convent, where St Teresa lived and later served as superior. 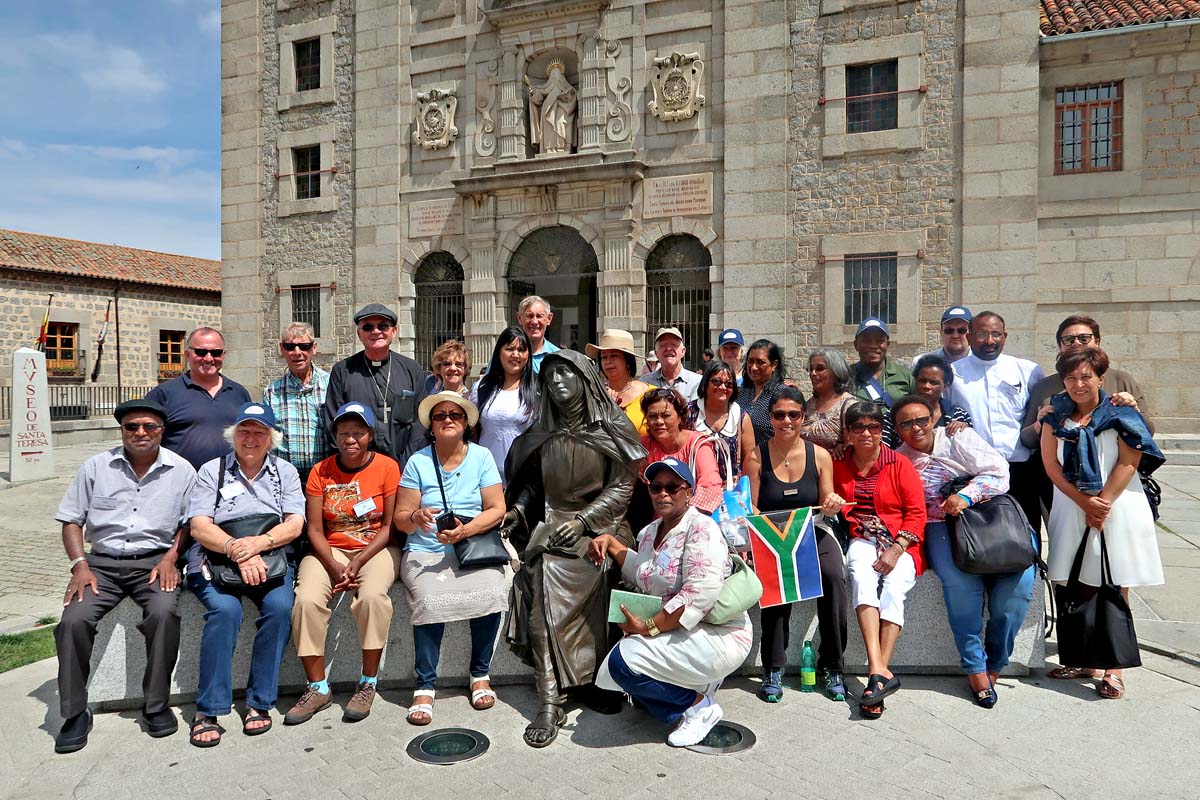 The Southern Cross pilgrims with a sculpture of St Teresa outside the church that marks the saint’s birthplace in Avila.

From Lisbon to Madrid, our group experienced a very special pilgrimage. And here the accent must also be on the word “group”. On a pilgrimage, the people coming together from different places and backgrounds form a community of believers. And this community bonded quickly and particularly well. From an organisational point of view, this group was more punctual than any I have travelled with — to the point that our guide in Madrid stood slack-jawed when the whole group was gathered at the meeting spot more than ten minutes before the appointed time.

Unlike St Teresa, our group allowed for no confusion about time.

This concludes the series. The Southern Cross in association with Radio Veritas will repeat this pilgrimage in October, to be led by Fr Brian Mhlanga OP. For details see www.fowlertours.co.za/fatima