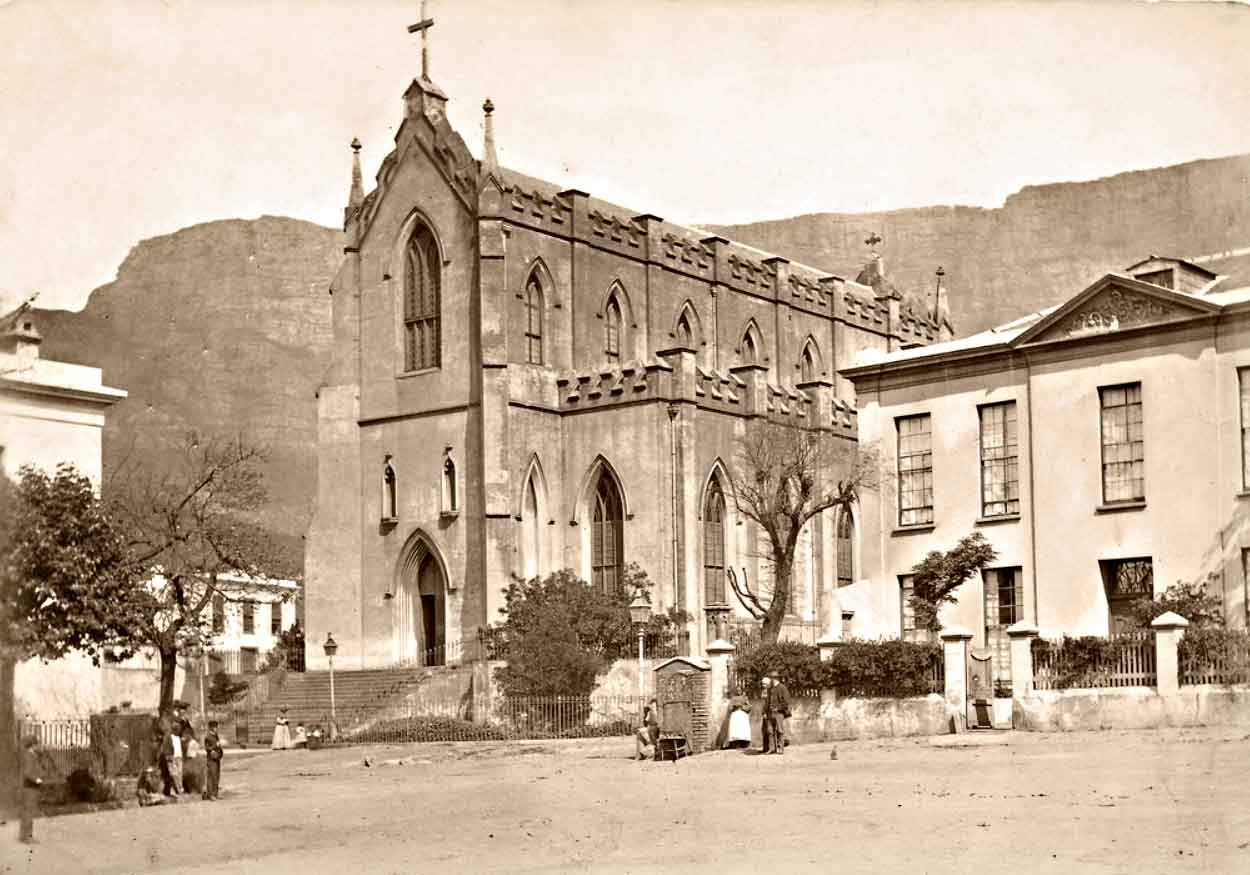 St Mary’s cathedral in Cape Town in the late 19th century. The Southern African Church will mark the 200th anniversary of the establishment of a local vicariate next June

By Erin Carelse – The archdiocese of Cape Town will begin a year-long celebration of the 200th anniversary of the establishment of the Church in South Africa with an invitation-only Mass this weekend, on June 25.

The bicentennial celebrations, which will involve the other dioceses in the region, is planned to culminate with national Masses of Thanksgiving at noon on June 10, 2018, in every cathedral, parish and mission station throughout Southern Africa.

The Church Begins in SA

Pope Pius VII erected the vicariate apostolic of the Cape of Good Hope and adjacent territories on June 7, 1818, constituting for the first time a formal presence of the Catholic Church in Southern Africa.

Bishop Bede Slater, a Benedictine, was named bishop, but because of anti-Catholic laws, he was forced to reside in Mauritius.

The first resident vicar-apostolic was Bishop Raymund Griffiths, a Dominican, in 1837.

In the almost 200 years since the vicariate apostolic of the Cape of Good Hope was established, the presence of the Catholic Church has grown, with  28 dioceses and one vicariate in the Southern African Catholic Bishops’ Conference (SACBC) region, which comprises South Africa, Swaziland and Botswana.

At the inaugural bicentennial celebration Mass at Cape Town’s St Mary’s cathedral on this weekend, “tribute will be paid to the selfless contributions of those heroic early pioneers; priests, both religious and laity, from far-off lands, by whose dedication and untiring efforts, the seeds of the Church were first planted in the Cape of Good Hope and throughout Southern Africa”, said Mgr Clifford Stokes, vicar-general and facilitator.

Due to space restrictions, the Mass is by invitation only.

He said today’s Church owes “an immense debt of gratitude” to the many religious congregations for “their invaluable contribution” in the fields of education and health care, “and also to those whose charism is to minister to the poor and the destitute”, Mgr Stokes said.

At the offertory procession during the Mass, symbols of their contributions to the Southern African Church will be brought up and displayed in the sanctuary.

A special decorated candle will also be blessed and given to every bishop or his delegate, to be taken back to their cathedral and placed in a prominent position during this bi-centennial year, “to further celebrate heroic contributions by so many who in the face of difficulty and often opposition have brought the light of Christ into Southern Africa,” Mgr Stokes said.

Bicentennial Celebrations through to 2018

Other events are planned for the 12-months of the bicentennial celebrations.

At least one large celebration in each deanery in the archdiocese of Cape Town will focus on “Our Forefather and Foremothers in the Faith”.

A Eucharistic procession is also being planned, starting from Holy Cross parish in District Six to the cathedral, with Benediction of the Blessed Sacrament.

Two special projects will include the youth and school-going children.

Two “Bicentennial Catholic School Choir Festivals” will be held in the Cape Town City Hall, on August 27 and October 29. These festivals will showcase the talent of the local youth and recount the story of Catholic education in South Africa.

The second project will be a youth competition entitled “Exploring our Catholic Heritage”.

Parishes and Catholic schools will invite the youth to tell their story through a heritage research project. The best entries will be published in the Archdiocesan News.

Archbishop Stephen Brislin has agreed, as part of the year of celebration, to administer the sacrament of confirmation at deanery level in 2018 where requested, rather than individual parishes, in order to promote a greater sense of Church among those who are to receive the sacrament.

To end off the bi-centennial celebrations, there will be a national Mass of Thanksgiving at noon on Sunday, June 10, 2018, hopefully in every cathedral, parish and mission station throughout Southern Africa.

A recording from Pope Francis will be aired, and the special candle distributed at the this weekend’s Mass will be lit in every cathedral in South Africa, Botswana and Swaziland. Bells will be rung to symbolise the solidarity of faith between everyone.

However, the archdiocese is facing a snag in planning for the closing ceremony, at which all bishops of the SACBC will be present.

““We are currently looking for a sufficiently large venue to accommodate 8000 to 9000 people for the celebration of a Mass, but as yet we have not found one” that is affordable to the archdiocese”, Mgr Stokes said, adding: “We may have to extend our search further away from the city centre.”

If anyone knows of a suitable venue to host the conference celebration that can accommodate 8000-9000 people and is available at a reasonable cost, please contact Mgr Stokes at stokes@mweb.co.za