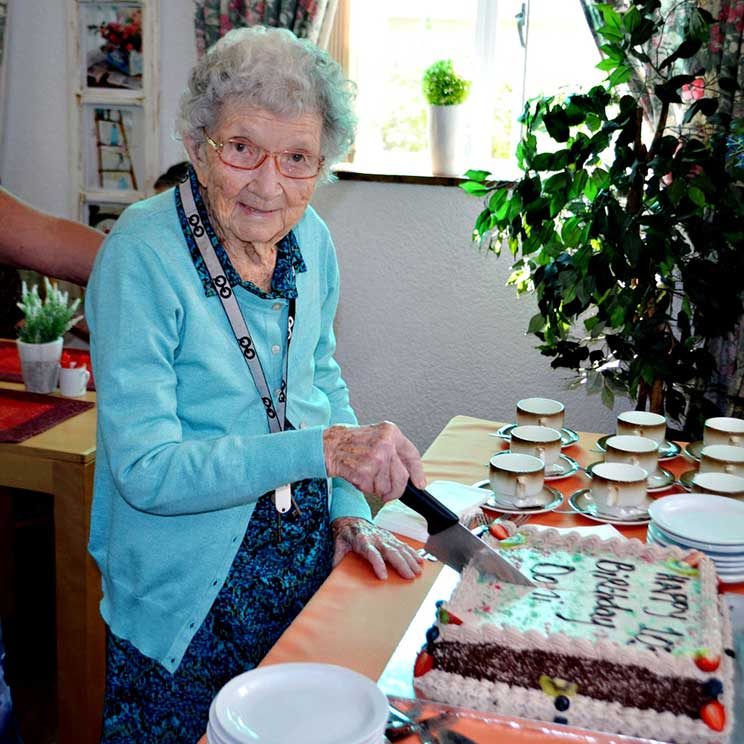 At the age of 104, Dominica Catherine Soglanich is inseparable from her rosary. At her peak, she would say up to 30 rosaries a day for friends and family in need. She is now down to ten — which son Christopher says means the family must be behaving better.

Mrs Soglanich — known widely as Aunty or Granny Domi — was treated to a birthday tea at St John’s parish in Fish Hoek, Cape Town, to celebrate her 104th birthday.

The youngest of five children born to Jure and Ursula Sinovich, Mrs Soglanich grew up in Pretoria North. At age 5 she was sent off to boarding school with the nuns at St Dominic’s Academy in Newcastle, KwaZulu-Natal.

She recalls that the nuns got her to record weather forecasting information from apparatuses at the far end of the large school property, requiring a five-minute walk. This was the only weather information available in central Natal and her recordings were relayed via radio to farmers across the province.

Often the young Dominica would turn around halfway and just guess the weather information without reading it. Years later she was embarrassed to find out that Natal farmers in the 1920s sat glued to their radios and would base their planting and reaping schedules on her guesses.

She married Tony Soglanich in 1940. Happily married for 54 years, they had two sons, Anthony and Christopher.

Chris Soglanich described his mother as a model wife, mother, grandmother of three, and most recently great-grandmother.

All the things she has lived through

The devoted matriarch of the Soglanich family still has all her mental faculties with amazing numeric recall, remembers birth and death dates of family and extended family and friends, knows her prices, and loves a good shopping sale and negotiating a bargain.

“My mother has lived through World War 1, the first Model T Ford, World War 2, the first commercial air flights, the first man on the moon, Halley’s comet, the Concorde, and computers. I’m extremely proud of her and not surprised at all that she has most people’s utmost respect,” Mr Soglanich told The Southern Cross.

“She has lived a hardworking, honest life dedicated to helping family and others, and has never ever spoken badly of anyone. She is always calm, and always positive, with an unerring faith,” he said.

When asked what the secret to her longevity is, he said: “It’s not so much what she does, but what she’s never done. She’s never driven a car, never used a computer, never drank alcohol and never smoked.”

Among Mrs Soglanich’s prized possessions are the three papal blessing certificates from the Vatican from three different popes: from Pope Paul VI in 1965 on her 25th wedding anniversary; from Pope John Paul II in 1980 on 40 years of marriage; and from Pope Francis in 2013 on her 100th birthday.

Mrs Soglanich’s faith has worked what the family believes is a miracle.

When Chris Soglanich was six years old, he was confined to hospital in Pretoria for almost a year.

The doctors prepared his parents for the worst, telling them after eight months of treatment that there was no cure for the boy’s ailment.

A neighbour, Agnes Toich, gave Mrs Soglanich a rosary and a small bottle of holy water from Lourdes. Mrs Soglanich put the holy water all over Chris and continued to pray like only a mother can.

Soon after, the physician, Dr Epstein, told the Soglaniches: “Look, I don’t quite know what has happened here, but something has definitely happened.” Pointing to Mrs Soglanich, he said: “Your son is cured; you can take him home.”

Every time my mother’s prayer requests are met, twice the prayers get said in gratitude, Chris said.

“She is a remarkable woman in so many ways. We, her family and many friends, are truly blessed to have her as part of our lives.”