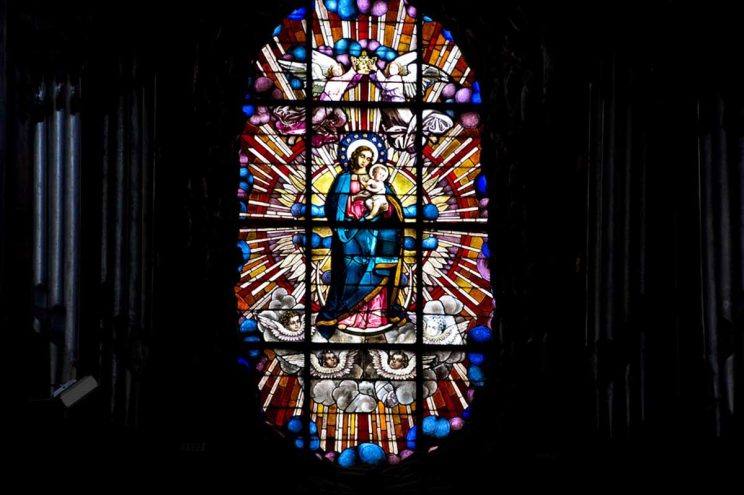 By Fr Ralph de Hahn – Little Alice always loved window-shopping, but this window was special. Standing before this huge shop display on the morning of Christmas Eve she found herself totally absorbed and mystified by the wonderful scene before her searching eyes.

She gazed with fresh fascination at the newborn babe in the arms of his mother, with the kindly Joseph at her side, and three shepherds and a few animals around the stable crib. What was most gripping and wonderful for her joyful heart was that every figure was of glass-rich, pure, sparkling glass!

Alice staggered home in a daze, with her heart and mind deeply distracted by what she had seen. And then it happened. An accident!

Alice was still semi-conscious when they wheeled her into the Riverside Hospital. Witnesses reported that she was hit by a drunken motorist driving a Mercedes. The injuries to the body had yet to be determined but concussion was suspected.

Her widowed mother was called and arrived much later, only to find her daughter already in the care of doctors in the emergency ward. Alice was her only child. She was asked to wait, but for an anguished mother it was a long, long wait.

Late into the night the waiting came to an end when Alice became fully conscious after what appeared to be a long, deep sleep. And she had a marvellous story to tell.

In her sleep, she was magically transported into a new country, an extraordinary land where everything was made of glass. It was unbelievable, fascinating, yet so very real.

It was a wonderland world entirely of glass — clear, transparent, peaceful and beautiful to behold. Glass houses, glass trees, glass animals and birds, glass flowers. And all the people were lovely glass figurines.

Everything was of glass, yet nothing had ever been broken, splintered or shattered. And why not? Because in this exquisite wonderland all the people moved about carefully and gently in order not to hurt one another.

The atmosphere was so pure and peaceful; everything happened in perfect harmony. The very thoughts of the people were open and transparent.

Alice smiled with sheer delight as she related this remarkable experience: “No one dared to lie or speak even the tiniest untruth because even the most secret thoughts were transparent. The people were so careful and nice in what they said and what they did!”

Alice was also amused on reflecting that, when people encountered each other, certain questions were answered even before they were posed. Misjudging others was unheard of; there was no need for law courts, stringent judges or prison cells.

The supermarkets of glass conducted business with delightful ease; there were no miscalculations, no thieving, no security guards.

And the houses were totally exposed, with no ugly walls, no shrieking alarm gadgets, no prison-like iron bars protecting the windows, no armed security signs—and also no gangsters patrolling the streets.

And what of the traffic? The lanes were clear; the cars, trucks and even the taxis moved along meticulously, showing much respect for one another and for pedestrians. There was no hooting and no crazy bikers! It was a wonderland of glass and dignity.

Alice wept as she said: “I could live in such a country, Mom, really I could.”

“But, Alice dear, don’t cry. You have recovered wonderfully from your accident, and you are now back with us. Why are you so upset?”

“Because, Mom, that is the real world, the world God has planned for us.”

“No, no, Alice,” her mother explained, “this is the real world—a world of trials and suffering and all types of angry people, all striving for peace and harmony…and, of course, searching for true love.”

Alice was pensive, her eyes still glistening with tears: “I am going to find it so difficult to live in a land not made of glass; I need people to be transparent and sincere and truthful. No more lies, no more hypocrisy! No more hurting one another.”

Around the hospital bed there was an eloquent silence.

The mother spoke: “My dear daughter, I see you have a beautiful vision. You now have a task to live in this world just as you experienced life in the world of glass.”

Mother and daughter embraced. They were both in tears; for suddenly the coming of Jesus Christ into this world on Christmas Day had a totally new meaning.

God’s Great Gift to Us

Why We Must Wait For The Lord