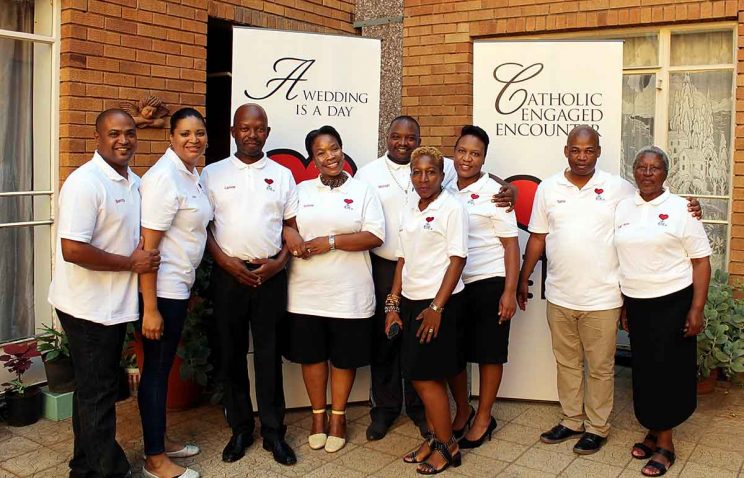 The Catholic Church has embarked on a special mission towards the eradication of racism in all spheres of society in South Africa, and during this Lenten season, all the Catholic faithful have been requested to create platforms where they are able to share the challenges relating to racism and find ways to address them.

Catholic Engaged  Encounter (CEE) has actively taken up the call to become an agent of anti-racism.

Thirteen couples from different races, backgrounds, and cultures in Southern Africa came together in Gaspar Bertoni Centre in Pretoria  archdiocese for a CEE workshop to share life experiences and learn from each other.

The programme allowed the participating couples to share their different cultural traditions and the challenges facing society, discuss how they see themselves in society, and learn to appreciate each other in the midst of their demographic diversities.

Commitment to Prayer and Communication

Among the many things the couples were taken through was an understanding of the person you want to marry, the need for commitment in prayer, quality communication between partners, how to live a life-giving marriage, as well as forgiveness of each other.

During an open session, one of the couples thanked the Church for creating such a platform, in which all the different races of South Africa can come together to share stories about their lives and what they do in their own cultures concerning marriage.

Couples expressed their gratitude and said they had learned a lot from different cultural experiences.

They also thanked the organisers for dedicating their time, free of charge, to help engaged couples understand the sacrament of matrimony and offer guidance on a better way of living marriage.

Participants asked many questions relating to marriage, and shared how they have started to address possible challenges they’ve met during courtship in preparation for a permanent commitment to each other.

During the closing session of the workshop, team member Fr Paul Tatu CSS emphasised that marriage needs a lot of discipline; and acknowledgment that once one gets married, life will never be the same.

“There is a need for conversion and a continuous initiative to adopt a new way of life. Marriage is exclusive. One should sacrifice the rest for the sake of the person one enters into marriage with,” Fr Tatu said.

Towards the end of the workshop, couples sat together without facilitators to evaluate how the weekend went and what they had learned.

They also discussed how they would like to help the CEE programme spread to all parts of Southern Africa so that the dignity of marriage can be restored, both in the Church and in society at large.

CEE is an officially approved international programme in the Church, meant to cater for the final preparations of engaged couples approaching their wedding day.

The programme is conducted by a team of young and old couples who share their experiences of their marriages, guided by the programme’s framework.

Though CEE is conducted in a Catholic context of understanding marriage, the programme is open to all couples who want to prepare themselves for a better foundation when they get married.

The Southern Africa Catholic Bishops’ Conference has officially recognised CEE as one of its programmes to prepare engaged couples for marriage.

CEE can be found in Pretoria, Cape Town, Durban, and Johannesburg, but couples are free to join any one of the regions depending on the date and availability of the couple.

Getting Ready to Take on Marriage

As We Celebrate 25 Years Of Marriage