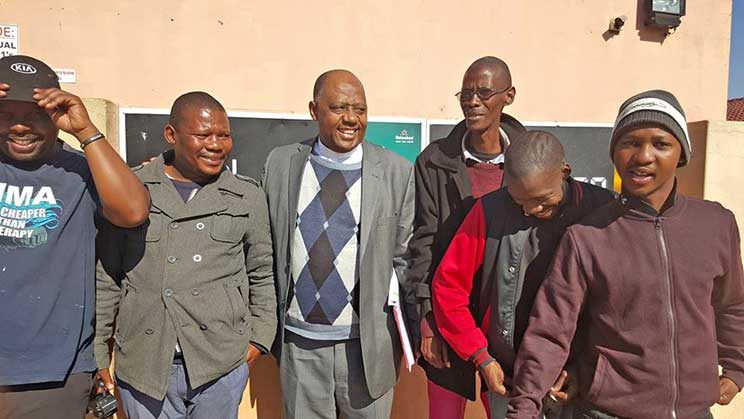 Bishop Victor Phalana of Klerksdorp with tavern owners and customers. The Tavern Project, which calls on men to actively combat violence against women, will be presented this month at the UN.

A delegation of South African Justice & Peace activists, led by Bishop Victor Phalana of Klerksdorp,  addressed the United Nations to present the “Tavern Project”, which has been implemented in North West province.

The Tavern Project is an anti-gender violence initiative in Klerksdorp diocese which started as a result of a workshop organised by the HeForShe campaign.

The delegation will introduce it at the UN headquarters in New York on September 26.

The Tavern Project — which began in Khuma, Kanana, Tigane and Jouberton — has mobilised more than 70 taverns to let men become key agents in combating gender-based violence.

“The reason that we work with faith-based organisations is that you, more than anyone else, especially the leaders of different faiths, have the opportunity to shape different practices, different types of relationships between men and women, [and more] than anybody else, even the government,” she told the religious leaders.

Faith-Based Sector Should Be on the Forefront

Speaking at the same event, Bishop Abel Gabuza of Kimberley, chair of Justice & Peace, emphasised that “the faith-based sector should be at the forefront of efforts to end the scourge of violence against women in our country. This important task should not be left to the government alone.”

Ms Shongwe applauded Justice & Peace for developing the project, which mobilises men and tavern owners to be key agents in the fight against gender-based violence.

The Tavern Project, which began with a three-day training workshop, in collaboration with the global HeForShe Campaign and Justice & Peace, informed and educated tavern owners on gender-based violence.

Tavern owners pledged to front and support the fight against harassment and violence against women and children.

Speaking on the project’s first event, Klerksdorp’s Bishop Phalana explained: “We chose to close the street in front of a very popular tavern in the township.

“We wanted to preach the message out there in the community, like Pope Francis encourages us to do, and not in the comfort of a building,” he said.

“We were very thankful that tavern owners came out and spent the entire day with us, considering it would have been a busy day in terms of business,” the bishop said.

“This confirmed for us their commitment to fighting any form of women-harassment, as well as to not selling alcohol to under-age youths and pregnant women,” he said.

Among those presenting the project at the UN will be Bishop Phalana, Robert Mafinyori of Justice & Peace, and one of the tavern owners from the diocese of Klerksdorp.