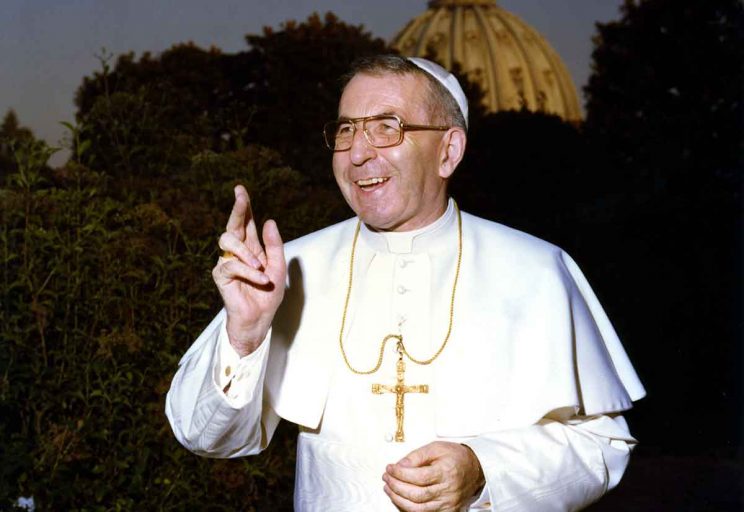 Pope John Paul I, who died after only a month in office 40 years ago on September 28. (Photo: L’Osservatore Romano/CNS)

The death of Pope Paul VI  at Castel Gandolfo in Italy on August 6, 1978, began an extraordinary sequence of events and led to 1978 being given the name of the “Year of Three Popes”.

Paul VI had been Bishop of Rome for some 15 years, following in the footsteps of John XXIII, a difficult journey for anyone to contemplate. It fell to Pope Paul to bring the Second Vatican Council to a close and then to guide the Church through the tempestuous and war-torn years of the 1960s and ’70s.

With his death, the due process of conclave followed, when cardinals worldwide were summoned to Rome to begin the process of electing his successor.

By all accounts, in the heat of a Roman summer, it was an uncomfortable gathering. On the fourth ballot, the name of the patriarch of Venice, Albino Luciani, received a significant majority of votes.

So it was on the evening of August 26 that the announcement of his election was given to a crowded St Peter’s Square and his choice of name, John Paul, made known. He quickly became known as the “smiling pope”.

But his residency in Rome was to be brief for, some 33 days later, on September 28, this quiet, reserved man died of a heart attack. He was found in his bed on the morning of the 29th. The book he had been reading, Thomas à Kempis’ The Imitation of Christ, was still open and the bedside light still on.

The second pope of 1978 had been taken by the Lord. His funeral on October 4 was celebrated by Cardinal Confalonieri who spoke of John Paul I as “a flashing comet who briefly lit up the Church”.  Yes, his papacy was brief but in so many ways it indicated the path that Pope Francis would tread many years later.

On a lighter note, my family had just moved house that September and to ease the loss of friends, we bought my son a hamster, who promptly was named John Paul. When I heard the morning news and called upstairs that “John Paul is dead”, the howl from his bedroom only ceased when the confusion was explained.

So for a second time, the cardinals were summoned to Italy. Again it was to be a short conclave. It began on October 14 and after eight ballots, the cardinal archbishop of Krakow, Karol Wojtyla, was elected to the See of Rome, taking the name of John Paul II.

It was the start of a long, significant and at times controversial papacy.

Born in Poland in May 1920, he was a young man at the time of election by the College of Cardinals. Being Polish, his election broke with the long tradition of an Italian papacy.

His experience of living in communist Eastern Europe contributed to his playing a major part in the collapse of communism in 1989, when country after country of the Eastern bloc rejected the totalitarianism of the Soviet era and the “Iron Curtain”.

Only three years after his election, on Wednesday, May 13, 1981, in the square outside St Peter’s, Pope John Paul II was shot and wounded by Mehmet Ali Agca. He was hit four times, and suffered severe injury. His would-be assassin was apprehended immediately and received a life-sentence from an Italian court. The pope later forgave Agca for the assassination attempt.

The later years of his papacy were marked by a conservative pattern of leadership as many subtle — and at times not so subtle — attempts were made to inhibit the decrees of Vatican II.

John Paul II was without doubt a heroic figure, who travelled extensively.

That time now is history, though 40 years on, its influence is still felt.

John Paul I wanted to address the crowded square after his election but he was reminded by the papal master of ceremonies that it was not usually “the done thing”.

How different when Francis stood on that same spot in 2013 and began with the words: “Good evening! You know that the duty of the conclave was to provide Rome with a bishop. It looks as if my brothers the cardinals went to fetch him from the end of the world.”

Yes, a long journey,but of benefit to us all.

This article was first published in the Catholic Times.