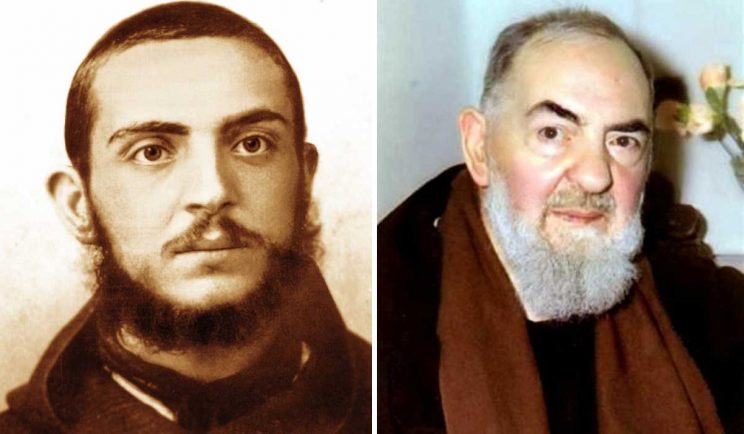 He is one of the Church’s most popular saints, revered for his holiness, but there was a time when even a saintly pope opposed Padre Pio, who died 52 years ago today. CHRISTEN TORRES looks at the times of the Capuchin friar from Pietrelcina.

Today, September 23  marks the 52nd anniversary of St Padre Pio’s death at the age of 81.

By all measures, the Capuchin priest was an extraordinary spiritual person, and became widely known around the world as a confessor, for the countless miracles attributed to him even during his lifetime — including his reported ability to bilocate to different places — and the stigmata he bore for over 50 years as a priest.

But the priest was also controversial, even subjected to sanctions by a saintly pope.

Padre Pio — St Pio of Pietrelcina — was born Francesco Forgione to peasant parents on May 25, 1887 in Pietrelcina, in the southern Italian region of Campania.

Francesco had four siblings — an older brother and three younger sisters — and although the family did not have much in wealth, they were spiritually rich in their faith and love of God.

From a young age, Francesco showed a strong devotion to God and spiritual life, dedicating his life to God at the age of five. His mother described him as “a quiet child who, from his earliest years, loved to go to church and pray”.

It is also said that from a young age, Francesco was able to communicate with his own guardian angel, as well as with the Virgin Mary and Jesus Christ. Padre Pio later said that he assumed that everybody could do that.

The road to priesthood

In 1897, three years after he started school, Francesco expressed to his parents a desire to join the priesthood. His parents decided to travel to a community of Capuchin monks, who assessed him. They decided that, because of his young age, Francesco needed to further his education before he could join them.

Francesco’s parents decided to hire a private tutor, to prepare the boy for a life in the priesthood.

Francesco’s father paid for the tuition by travelling to the United States, where he had found work, and sending money back home to Italy.

At age 15 Francesco was finally able to enter the novitiate of the Capuchin Order of the Friars Minor in Morcone, where he took the religious name Pio,’ in honour of 16th-century Pope Pius V.

From an early age, Pio had been a very sickly child, having suffered from a gastroenteritis attack at age six as well as a typhoid fever at age ten. At the age of 17, Br Pio suddenly fell ill again, complaining of weight-loss, insomnia, fainting spells and exhaustion—some of the many ailments he continued to experience throughout his life.

Padre Pio devotees highlight this time as the beginning of the many inexplicable phenomena which were to occur in his life.

Throughout this period of illness, Br Pio still continued his study for the priesthood and maintained his spirituality. One fellow monk reportedly witnessed seeing how during a moment of prayer Br Pio levitated off the ground, in ecstasy.

On August 10, 1910, at the age of 23, Padre Pio was ordained to the priesthood, at the cathedral of Benevento.

Due to his fragile health, the young friar was allowed to stay with his family, while still retaining the Capuchin habit until 1916.

That year he joined the small Capuchin community in San Giovanni Rotondo, a small village in the south-eastern region of Foggia. Except for a period of military service — altogether 182 days — he would remain there till his death.

The wounds of Christ

In September 1918, while hearing confessions, Padre Pio experienced the first spontaneous occurrence of the stigmata on his body.

The physical marks, pain, and bleeding in bodily locations corresponding to the crucifixion wounds of Jesus Christ had also been suffered by St Francis of Assisi, founder of the Franciscan movement of which the Capuchins are part.

The stigmata left painful and bleeding wounds on his hands and feet, and would remain with Padre Pio for the rest of his life. The wounds would heal and reappear, but they were never infected.

The condition was also marked by the smell of perfume or flowers, particularly when the wounds bled. Many Padre Pio devotees say they can smell these aromas when they experience his presence or intercession.

The miraculous nature of Padre Pio’s life was not without scrutiny and criticism from the public and the Church itself.

Because of the unusual nature of the miracles that were reported around Padre Pio, the Holy See launched an investigation into these accounts.

Pope Pius XI, who became pontiff in 1922, along with the Vatican, became extremely doubtful about his namesake. The Vatican imposed severe bans on Padre Pio, including forbidding him to say Mass in public, bless people, answer letters written to him, publically show his stigmata and communicate with his spiritual director, Padre Benedetto. 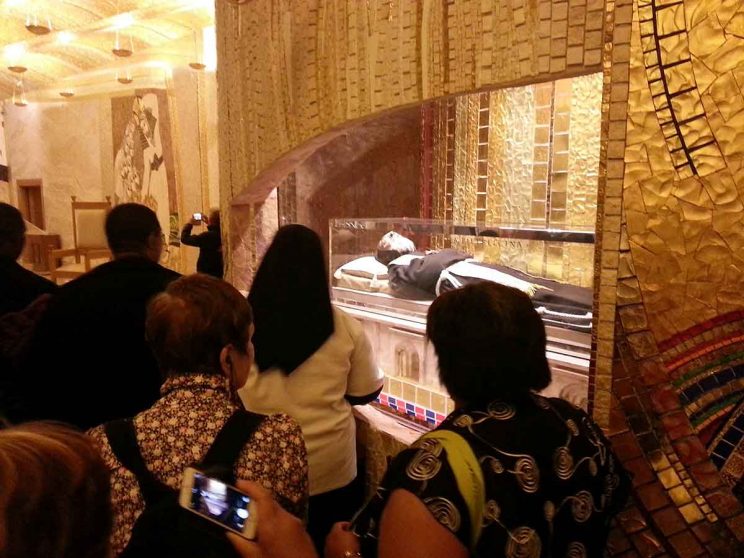 Pilgrims at the tomb of Padre Pio in San Giovanni Rotondo. His body, said to have been in a fairly good condition, was moved from a simple burial place in a crypt in the church of Our Lady of Grace to a richly-decorated tomb in 2008. His face is covered with a life-like silicone mask. (Photo: Gunther Simmermacher)

Padre Pio was also to be relocated to another convent in northern Italy, but following riots from locals, the Vatican was forced to drop that plan.

From 1924-31 the Holy See issued several public statements which denied that any miraculous events that took place in Padre Pio’s life were in any way linked to a divine cause.

During this time Franciscan Father Agostino Gemelli, a physician and psychologist who was the founder of Milan’s Catholic University of the Sacred Heart, met Padre Pio, but was unable to examine his stigmata. Fr Gemelli denounced Padre Pio as “an ignorant and self-mutilating psychopath who exploited people’s credulity”.

Dr Gemelli was among those who suggested that Padre Pio used carbolic acid to create the wounds of his stigmata. Archbishop Gagliardi further attempted to prove this theory when it was uncovered that a pharmacist had sold Padre Pio carbolic acid in 1919.

This accusation was investigated and later dismissed by the Vatican which noted that the carbolic acid was bought as a sterilising agent in injections to fight the Spanish flu, which was sweeping Europe at that time.

Throughout the 1920s, Padre Pio’s credibility was continually challenged, but the mood began to shift in the 1930s.

In 1933 Pope Pius XI ordered the Holy See to reverse its ban on Padre Pio’s faculties to celebrate public Mass. “I have not been badly disposed towards Padre Pio, but I have been badly informed,” Pope Pius said.

Padre Pio was granted permission to hear confession in 1934 and then given honorary permission to preach, despite not having a preacher’s licence.

When Pope Pius XII assumed the papacy in 1939, he actively encouraged the public to visit Padre Pio.

In 1956, with the help of the United Nations Relief and Rehabilitation Administration, Padre Pio opened a hospital in San Giovanni Rotondo. He named it Casa Sollievodella Sofferenza (Home to Relieve Suffering).

Later in life Padre Pio became very well-known worldwide as a priest who was leading a life based on Franciscan spirituality which is characterised by a life of love, poverty, faith and nature.

As a spiritual director he detailed the five rules of spiritual growth: daily Communion, weekly confession, meditation, spiritual reading, and the examination of the conscience.

The controversies around Padre Pio resurfaced in the early 1960s when Pope John XXIII imposed restrictions on him following (unproven) accusations of inappropriate contact with women.

But in 1964 a new pope, Paul VI, an admirer of Padre Pio, lifted all restrictions.

In his time, Padre Pio received many visitors at San Giovanni Rotondo. Among them in 1947 was a young Polish priest from Krakow in Poland.

“You will attain the highest post in the Church, though further confirmation is needed,” Padre Pio reportedly told the young Fr Karol Wojtyla — the future Pope St John Paul II.

By 1962, now Bishop Wojtyla asked the friar to pray for a close friend, Wanda Poltawska, a concentration camp survivor who was told she would die from cancer within 18 months. Her inexplicable healing has been attributed to the intercession of Padre Pio. 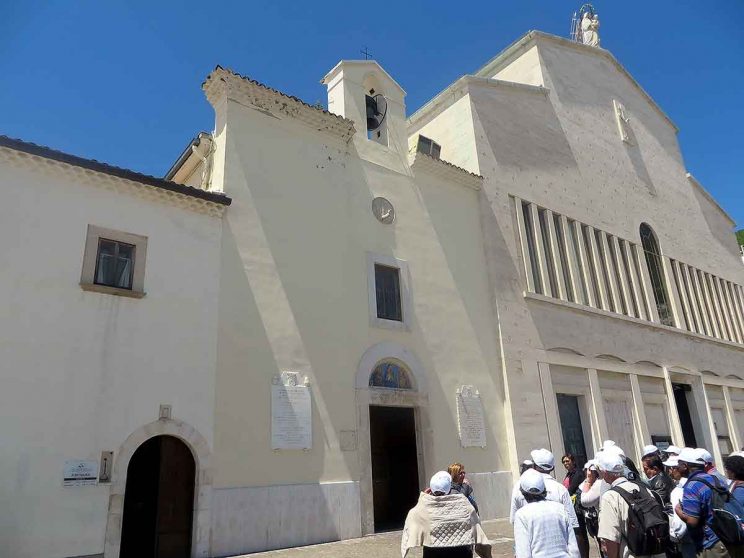 As the calendar turned to September 23, 1968 — three days after the 50th anniversary of the first appearance of the stigmata — Padre Pio made his last confession and renewed his Franciscan vows.

Holding a rosary in his hands, he repeated the phrase, “Gesù, Maria” — “Jesus, Mary”.

At around 2:30 am, Padre Pio spoke of seeing two mothers (believed to be his mother and Mary) and finally released his last breath, whispering “Maria”.

It is said that an inspection of Padre Pio’s dead body revealed no stigmata wounds, nor any scars of wounds (which one would have expected to find, whether they were caused by stigmata or were self-inflicted). Only a small red mark was seen on his side, but that too disappeared.

Some 100000 people attended his Requiem Mass in San Giovanni Rotondo, where he was buried (his body was later relocated to a bigger tomb).

In 1971, Pope Paul VI said of Padre Pio: “Look what fame he had, what a worldwide following gathered around him! But why? Perhaps because he was a philosopher? Because he was wise? Because he had resources at his disposal? Because he said Mass humbly, heard confessions from dawn to dusk and was — it is not easy to say it — one who bore the wounds of our Lord. He was a man of prayer and suffering.”

Padre Pio is the patron saint of civil defence volunteers, adolescents, and those suffering from stress. His feast day is on September 23.