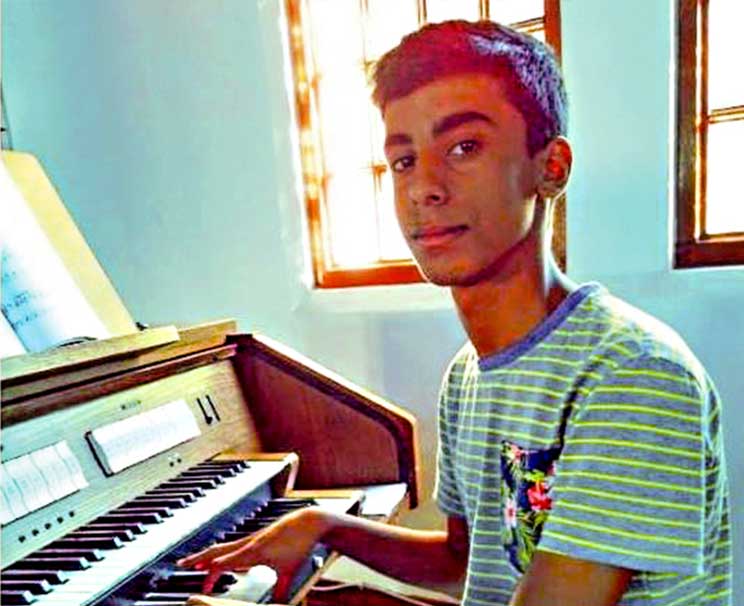 A teenager from the Cape Flats serves as resident organist of a great cathedral and has dreams of taking his talent into the world. ERIN CARELSE spoke to Dale de Windt.

Few cathedrals in the world boast organists who are too young to drive or vote, but congregants at Mass in Cape Town’s cathedral have regular  reason to delight in the musical talents of a teenager.

Dale de Windt is the gifted 17-year-old resident organist of St Mary’s cathedral. Born on the Cape Flats, his dream is to attend one of the six leading music schools in the world.

As a matriculant at Groote Schuur High School in Newlands, Dale naturally does music as a subject and plays in the school’s jazz ensemble.

His love for music began at a very early age.

“At four years old, I started learning how to play the recorder. I had a wonderful recorder teacher and I was very fascinated by ‘the music notes’,” Dale told The Southern Cross.

“My love for the piano started at the same time, mainly because of the beautiful sound it produced. I then started taking lessons at the age of five. My dad got me a keyboard and I just started playing from memory,” he said.

Listening to sacred and choral music is one of his favourite pastimes, he said. “It calms me down.”

Dale is a knowledgable fan of classical music. His favourites include the great composers of sacred music,  Johann Sebastian Bach, Dieterich Buxtehude (who taught Bach), as well as Claude Debussy and Wolfgang Amadeus Mozart whom Dale wishes he could have met.

Dale first started playing the organ at his local parish church, Our Lady of Good Counsel in Bridgetown, Athlone.

This brought him to the attention of Fr Rohan Smuts, the administrator of St Mary’s cathedral. In August 2016, the priest asked Dale if he could play at the cathedral for a month. Of course, Dale agreed.

“That’s where it all started for me — and here I am today, enjoying every moment at this beautiful cathedral, being able to play the cathedral’s organ.”

He loves playing the Cooper, Gill & Tomkins Three Manuals with 51 Ranks. “The great acoustics of this cathedral add to the fine sound of this beautiful organ,” Dale noted.

Love for the Church

And playing it is not only about making music, but also about his love for the Church.

“Each time I play at the cathedral I feel privileged and honoured because a cathedral is not just an ordinary church but it’s the mother church of our archdiocese and of South Africa, and the seat of the metropolitan archbishop of Cape Town,” Dale said.

The young organist enjoys playing for various liturgies in the archdiocese. In June he played at the closing Mass of the Bicentennial Year at the Bellville Velodrome.

Dale is well informed on the Church’s direction on liturgical music, quoting freely from Musicam Sacram, the instruction on Catholic sacred music issued by the Sacred Congregation of Rites in 1967.

One passage in particular inspires him: “Liturgical worship is given a more noble form when it is celebrated in song, with the ministers of each degree fulfilling their ministry and the people participating in it,” Musicam Sacram said.

“Indeed, through this form, prayer is expressed in a more attractive way, the mystery of the liturgy, with its hierarchical and community nature, is more openly shown, the unity of hearts is more profoundly achieved by the union of voices, minds are more easily raised to heavenly things by the beauty of the sacred rites, and the whole celebration more clearly prefigures that heavenly liturgy which is enacted in the holy city of Jerusalem,” the document notes.

One highlight of Dale’s still young musical career was his visit to the Chinese Central Conservatory of Music in Beijing for two weeks in July 2017.

“Over those two weeks I learned about different Chinese instruments and their culture — and tasting different foods was definitely one of my highlights of that visit.”

Recently, Dale had the privilege of having technicians recording him in the cathedral with a drone, for a YouTube video in a bid to help him achieve his dream.

“A gentleman approached me one morning after Mass who was very moved by my playing. I introduced myself and we started having a conversation. He asked me what my intentions are after I complete my matric year and I explained to him that my dream would be to study at any good institution in Europe, but specifically The Royal College of Music” in London, one of the world’s greatest conservatories.

That gentleman was Michael Arendse from the South African National Arts Council (SANAC).

Mr Arendse asked Dale if he would like to do a recording of organ pieces which could then be sent to the organ departments of the world’s six leading music institutions. Dale didn’t need to be asked twice.

The recording was made at St Mary’s cathedral on July 28.

“The interesting thing about this recording is that a drone was used as part of the recording,” said Dale. “I don’t think the use of a drone in a cathedral has been done anywhere in South Africa, and I don’t know about elsewhere.”

The recording session lasted up to about two hours, and Dale found that it was extremely successful.

“I’m very thankful to Mr Arendse and his a team for making this possible,” he said.

He is also very grateful to all who have helped him and who continue to do so, especially his music teachers and mentors.

His parent have always been very supportive of his music career since the very beginning, attending all of his concerts — and also ensuring that he maintains a balance between his music and academics.

“It can be very tiring as I have to be at so many places in one day, but it is important to prioritise, which my parents help me to understand,” Dale said.

He places his goal and dream to get some sort of a scholarship or bursary for one of the leading music schools in God’s hands.

“I pray to God that I will achieve this because without him I cannot do it. God has given me a gift and I am using it.”

His advice to other young people: “I urge anyone who has a talent to use it because one never knows where it can lead you, and in doing so you are giving a gift back to God.”

In the meantime, when Dale strikes the keys of that Cooper, Gill & Tomkins, he does God’s work — to the delight of the congregants at St Mary’s cathedral.