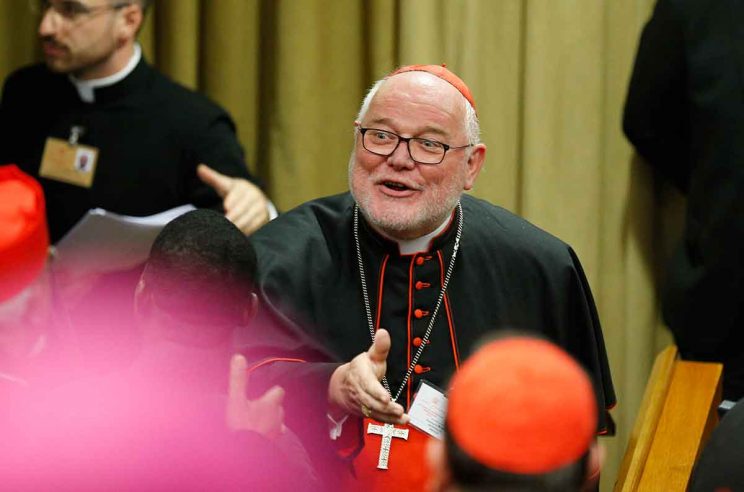 Cardinal Reinhard Marx of Munich arrives for the opening session of the Synod of Bishops on young people, the faith and vocational discernment at the Vatican Oct 3. (CNS photo/Paul Haring)

The days of making “weak excuses” in response to the sexual abuse crisis are over, said German Cardinal Reinhard Marx of Munich and Freising.

The Catholic Church needs more open and clear dialogue, accountability and a willingness to see abuse survivors and critics who push for remedy and reform not as enemies, but as “as cooperators with the Holy Spirit,” the cardinal said at a news conference Oct. 5.

Next to a flat wooden cross covered with shards of a broken mirror, the cardinal and others spoke at an event hosted by the Pontifical Gregorian University and its Center for Child Protection. The center was announcing the start of the first interdisciplinary two-year master’s degree program in safeguarding. The cardinal’s archdiocese has helped provide financial support to the CCP since it was established in 2012.

Cardinal Marx, who is president of the German bishops’ conference and a member of Pope Francis’ advisory Council of Cardinals, said the situation now compared to just six years ago when he helped inaugurate the Center for Child Protection “is much more urgent.”

Studies, investigations and deeper reflection have revealed this “urgent situation” cannot be met with the same excuses and continued inaction, he said.

“Abuse is a crime,” he said. “In any civilized society, it’s normally obvious how to handle crimes. They must be investigated” and prevented.

Which is why it is “all the more surprising … shocking and incomprehensible to realize” that within the Catholic Church, he said, “there were apparently other standards” being followed that justified “dodging and denying.”

The cardinal said he reviewed the way he first responded to the wave of abuse allegations in Germany in 2010, and recalled the excuses made and his belief the media was being hostile toward the church.

In hindsight, he said excuses were made to explain “inaction” and such a scenario “is over” and must not be repeated.

“It’s not only (because) these excuses are very weak and are no longer tolerated by the public, but it is also worth noting those who use these and similar excuses are equally guilty of causing the suffering of the victims and have become accomplices in some way to the perpetrators.”

The reasons for resisting reform are varied, he said, but while fears of change or “losing power” are understandable, they are not acceptable.

It is better to live with uncertainty about where change will lead than do nothing and live with “the certainty that we are contributing to the destruction” of individuals and the church, he said.

Looking at past experience, the church has been limited in its ability to change itself, he said. “It’s possible, but not so easy,” which is why “pressure from the outside is a help for us” because “without these voices there would not be change.”

“If no corrective action is taken by the church then the state has no other choice but to intervene,” he said, and given the circumstances of inaction, that intervention “could hardly be judged an attack on the church.”

In his 40-minute talk, Cardinal Marx said addressing abuse on a case-by-case basis has meant it has been tackled only “halfway.”

The church also needs a “systemic” approach that tackles structures and processes, which includes investigating allegations, intervention and implementing measures for prevention all over the world, he said.

Cardinal Marx said it is incorrect to assume that ordaining a man automatically makes him a good leader.

Good leadership “must be learned and practiced,” and supported, he said, and requires skills such as conflict management and personal development.

“Weak, thoughtless people with no leadership training who assume leadership roles such as that of a bishop are not in a position to deal with difficulties within the institution,” he said.

And, he added, as long as a bishop believes he has absolute power, compliance with standards and processes will be impossible.

“The question is how can it be ensured that all leaders within the church, including the bishops, must adhere to … binding rules, which limit capriciousness,” improprieties and a lack of transparency as much as possible.

Change will not happen by itself, he said. It requires “agents of change,” who are people who have the best interests of the church at heart. “I think in the church we sometimes call them saints.”

In a written statement issued during the news conference, the cardinal had some advice for an event he was also taking part in, the Synod of Bishops on young people, vocations and discernment.

In the process of working with young people to find answers to important issues, he said the bishops “must be aware of our language: platitudes, empty phrases, pious sound bites convince no one. The church must rather find a voice at last which will be understood, in which we can credibly talk about God and present a new image of the church.” By Carol Glatz Catholic News Service