The Courageous Witness of Saints Oscar Romero and Paul VI 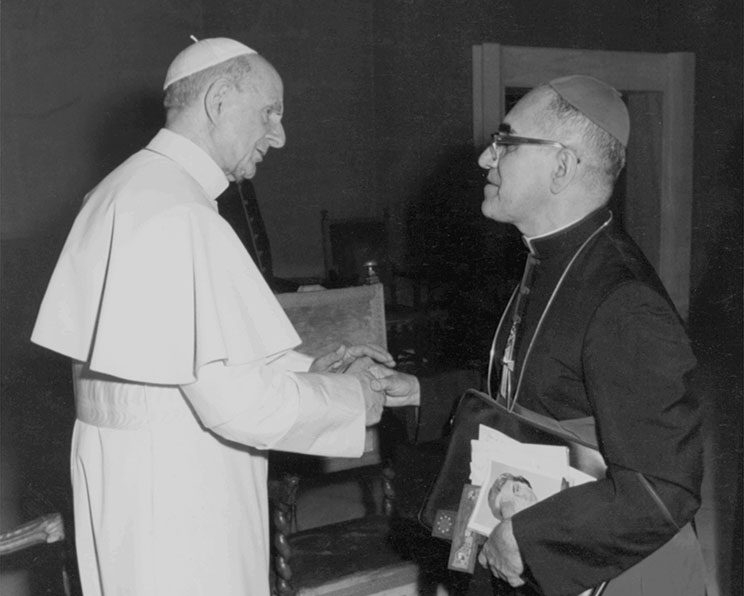 Blesseds Paul VI and Oscar Romero are two of seven new saints Pope Francis will canonise  at the Vatican. They are pictured in an undated photo. (CNS photo/Equipo Maiz, courtesy CAFOD, Just One World)

Who would have predicted it?

Who would have imagined on Feb. 23, 1977, the day of his appointment as Archbishop of San Salvador, that the highly conservative Oscar Romero – who was suspicious of the Catholic Church’s involvement in political activism – would die a martyr’s death for courageously defending his people against the murderous assaults of the Salvadoran government, military and right-wing death squads?

Romero’s appointment was welcomed by the government, but many priests were not happy. They suspected their new archbishop would insist they cut all ties to liberation theology’s defence of the poor.

However, as Romero started getting to know the poor and how they were oppressed by the government and rich coffee plantation owners, his conscience seemed to gradually awaken.

But the most important event affecting Romero’s decision to wholeheartedly stand with the poor and oppressed was the assassination of his close friend Jesuit Father Rutilio Grande; who was promoting land reform, worker unions, and organising communities to have a greater voice regarding their own lives.

Romero, who was deeply inspired by Grande said, “When I looked at Rutilio lying there dead I thought, ‘if they have killed him for doing what he did, then I too have to walk the same path.’ ”

In a letter to U.S. President Jimmy Carter, Romero warned that continued U.S. military aid to the government of El Salvador “will surely increase injustices here and sharpen the repression.” Romero asked Carter to stop all military assistance to the Salvadoran government.

During his March 23, 1980 Sunday national radio homily, Romero said, “I would like to make an appeal in a special way to the men of the army … You kill your own campesino brothers and sisters … The law of God must prevail that says: Thou shalt not kill! No soldier is obliged to obey an order against the law of God … In the name of God, and in the name of this suffering people … I beg you … I order you in the name of God: Stop the repression!”

The next day while celebrating Mass in the chapel of the hospital compound where he lived, Saint Romero’s loving heart was pierced with an assassin’s bullet.

With numerous armed conflicts raging in various parts of the world, and the Vietnam War worsening, Pope Paul VI on Oct. 4, 1965 proclaimed before the U.N. General Assembly: “No more war, war never again. It is peace, peace which must guide the destinies of peoples and of all mankind.”

Unfortunately, in 1965 the world did not heed Paul VI’s prophetic words. And sadly, it has not heeded them since.

Saint Paul VI in his prophetic encyclical letter Populorum Progressio (“On the Development of Peoples”) wisely said, “When we fight poverty and oppose the unfair conditions of the present, we are not just promoting human well-being; we are also furthering man’s spiritual and moral development, and hence we are benefiting the whole human race. For peace is not simply the absence of warfare, based on a precarious balance of power; it is fashioned by efforts directed day after day toward the establishment of the ordered universe willed by God, with a more perfect form of justice among men.”

The Beatitudes: The Path to Sainthood!