Build an Epiphany crib for the Holy Family

By the late Fr Bonaventure Hinwood OFM – As far as we know, when St Francis of Assisi set up the first Christmas crib at Greccio, it did not include wise men.In the course of time the practice has developed in some places of including the wise men (usually kings) in the stable from the beginning, but more usually they are added at the Epiphany to the shepherds and animals. 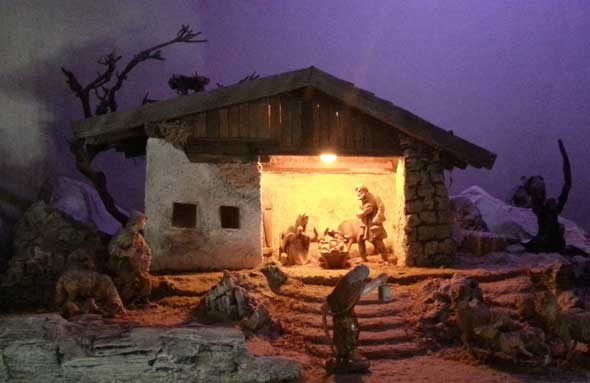 The Magnificat of the Church’s official evening prayer for the Epiphany speaks of them in the stable, as do some of the hymns that are sung at Christmas and Epiphany.

Yet, if we look at St Matthew’s gospel, which is our only source in the Bible for these wise men, it is reasonably clear that they could not have come to the stable.

The fact that King Herod had all male children of two years and under slaughtered suggests that Jesus would, according to the information he got from the wise men, have been nearly two years old.

The Holy Family would certainly not have continued living in a stable for all that length of time. They would obviously have moved into a house.

The fact that the wise men found the child, not baby, with Mary his mother, no mention being made of St Joseph, suggests that he was away from home, probably at work.

I would like to make the suggestion that the Christmas stable crib be replaced at the Epiphany by a house crib, without shepherds and animals, and probably better without St Joseph.

This house crib could be left up for a week or ten days.

Just a postscript: pictures of the flight into Egypt, and some sermons which mention it, have Jesus being carried in Mary’s arms wrapped in a blanket not likely for a two-year-old boy. If the family was walking, Jesus would most likely have been carried on his mother’s back. If Mary was riding on a donkey, he would have been sitting in front of her on the donkey.

The wise men at the stable crib might be a pretty and pious thought, but God is worshipped by truth, not by sentiment.

Christians are all Alter Christus

Cardinal Napier’s Warning to Priests and Are We Wandering From the Proper Mass?

What if Mary Had Said No?