God’s Great Gift to Us 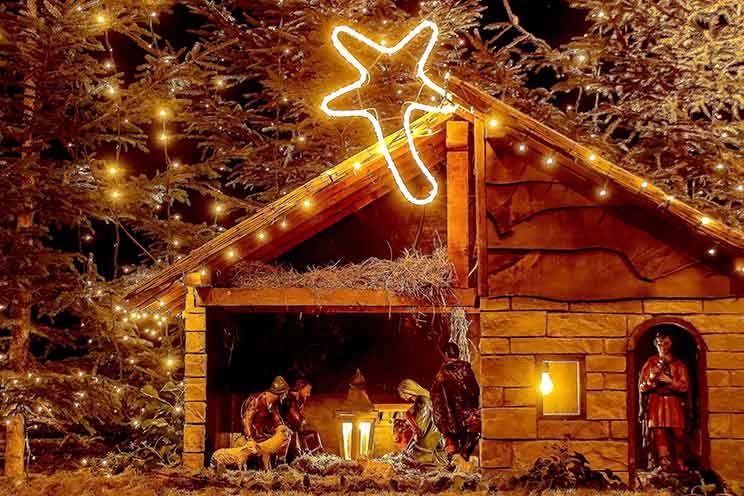 In Bethlehem a bit over 2000 years ago, majesty was born in the midst of the mundane, as Fr Ralph de Hahn notes in his Christmas reflection.

The little town of Bethlehem was no longer little. The streets were alive with unusual noises and bustle; a new excitement filled the air.

The innkeepers smiled with delight as the economy was boosted by the decree of Augustus Caesar. Travellers poured into the town from all sections of the country. Everyone seemed so immersed in conversation and gossip. So busy, indeed, that nobody mentioned a pregnant young girl slowly moving into the town with a very tired husband by her side.

But there was no room, no bed, no shelter from the night’s chill. It was just fortunate that the innkeeper’s wife noticed the awkward and urgent needs of the young couple, and so offered the pregnant mother a stable bed behind her inn; only a smelly stable with the animals and the pungent stench of dung and urine, and disturbing noises. A more lowly place for a little baby could not exist!

Here, the couple rested, and waited, in these miserable surroundings; waited for that one remarkable moment when God would enter our world.

No mighty welcome, except the poor shepherds whose watch on the hills was so shockingly interrupted by that explosion of light and the symphony of angels. Then, later, came the stargazers from the east with their prophetic gifts.

There in that virgin’s arms was a babe who had no mother in heaven, and no father on earth. The young mother could not take her eyes off that beautiful babe—her flesh, her blood—and she simply looked down upon heaven resting in her arms.

Joseph, now overtired and perplexed, totally obedient, needed to sleep. That tiny group shared those awesome moments with Emmanuel there present, not like a human baby, but as a human baby!

The impossible made possible, as foretold by the Jewish prophets, and only by the power of a Love beyond human understanding. Majesty in the midst of the mundane, so utterly dependent on this young mother, so helpless, so fragile and vulnerable — yet, unbelievably, the Lord of all creation. Eternity measureable in the claws of time.

Heaven opened herself and placed the precious One in a human womb. God now had a face in Jesus, and ears, and a tongue, a human heart, and kidneys and blood.

Mary changed his nappy, fed him, talked to him, cared for him in that smelly stable. How uncomfortable, even irreverent, we feel knowing that this is the almighty, eternal God, and this is all  his creatures have to offer him.

It would sound far easier to keep our sinful humanity out of the Incarnation. But the mystery persists. For the unbeliever there is no explanation, but for us who believe in God’s inexplicable and endless love, no explanation is necessary. God’s Word was made flesh and he dwelt among us.

Christmas begins what Easter will later celebrate. And with the Psalms we join the roaring of the oceans, the deserts flowing with springs of living water, the mountains leaping for joy, the heavens thundering their praise for at that one and only moment the infant God crawled onto the human stage.

Fr Ralph de Hahn is a priest in the Archdiocese of Cape Town.

The Southern Cross wishes all its readers and supporters a very Blessed Christmas. God bless you all...