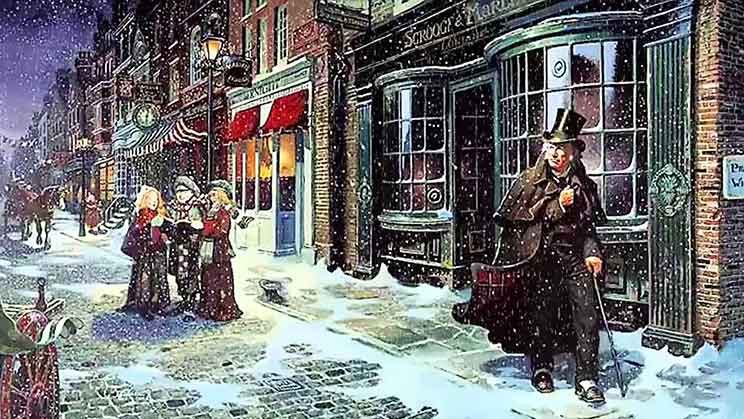 Carollers are depicted on a London street outside the office of Scrooge & Marley from Charles Dickens’ A Christmas Carol. The sound of the carol “God Rest You, Merry Gentlemen” sent Ebenezer Scrooge into a violent fury.

Once a folk carol sneered at by purists, ‘God Rest You, Merry Gentlemen’ has a profound Christian message. GÜNTHER SIMMERMACHER looks at the carol’s history.

When the carol-singer came upon Ebernezer Scrooge’s door to croon the cheers of yuletide through the keyhole, he had to flee in terror at the threat of having violence visited upon him.

The carol that sent the lead character from Charles Dickens’ A Christmas Carol into a mood of disproportionate fury was “God Rest You, Merry Gentlemen”. Happily, the crooner managed to escape Scrooge’s rage, “leaving the keyhole to the fog and even more congenial frost”.

Dickens’ choice of this carol shows that “God Rest You, Merry Gentlemen” was ubiquitous 175 years ago, in 1843, the year his classic book of Christmas and conversion was published.

Indeed, it is one of the oldest surviving English Christmas carols. The language of the lyrics suggests that it goes back as far as the 1500s, around the time other carols such as “The First Noel” were popular. But the first known publication of its words dates to around 1760—when it is referred to as “Tidings Of Comfort And Joy” — and of the melody to 1829 (as part of a parody of the carol), although it was used long before that.

The melody and text were first published together as a Christmas carol in 1833, in a collection titled Christmas Carols Ancient and Modern, compiled by William Sandys, which also included the first publications of old Christmas hymns such as  “The First Noel” and “I Saw Three Ships”.

The clue that “God Rest You, Merry Gentlemen” predates those various years by a century or two is in the title: the usage of the verb “to rest” in the sense of “causing one to remain” was common in the 16th and 17th centuries, but obsolete by 1760.

If grammar gives us a clue as to the carol’s age, grammar is also the victim in the incorrect rendering of the title — and our friend Dickens was an early perpetrator of that.

The comma comes before the word “merry”. The title does not suggest that the eponymous grandees are of such convivial cheer that they needed God to help them sleep. Rather than suggesting a spirit of joviality, as we understand the word today, the adjective “merry” meant as much as prosperous and agreeable.

By the late 17th century, the word “merry” had acquired rather profane connotations; for example in the use of the term “merry-bout” for sexual intercourse (but don’t let that put you off from wishing others a “Merry Christmas”).

In the mid-18th century, the carol’s usage of both “rest” and “merry” was already archaic. Dickens had so little use for it that he paraphrased the title “God bless you, merry gentlemen”, shifting the comma where it doesn’t belong.

This might or might not have been Dickens exercising his editorial prerogative. But before lyric sheets standardised folk songs, the words were always subject to change, depending on the singers and where, when and to whom they were singing. So chances are that Dickens’ version of the title was in use, at least in the 1840s in London. Evidently, it didn’t catch on, leaving us with relics of 16th-century English that makes little sense today.

Contrary to tropes shared annually on social media, “merry” does not mean “mighty”, and “God Rest You, Merry Gentlemen” is not a call to arms in the face of the supposed “War on Christmas”.

Today, the carol’s unknown writers might implore, “May God keep you in contented spirits, folks” — though that sounds neither elegant nor catchy—with the attendant recommendation that we should let nothing dismay us, since we have the Saviour with us.

What Dickens got right, and many others get wrong, is the use of the pronoun “you”. It might sound suitably quaint to use the archaic “ye” instead, but it’s wrong because — and this one is for the grammar enthusiasts among us —”ye” is a subjective (nominative) pronoun and is never used as an objective (accusative) pronoun.

The full lyrics were published in 1775, in the snappily-titled The Beauties of the Magazines, and Other Periodical Works, Selected for a Series of Years, reproduced from a song-sheet a contributor identified only as C. (likely the English dramatist George Colman) had bought from a caroller in the street.

His purpose was not to propagate the carol, but to condemn it by publishing it as an example of the kind of non-liturgical Christmas songs he despised; “the same carrols [sic] I have heard sung about the streets in this season for above these 30 years”.

Liturgical music at the time was quite the flipside to popular street carols; it was dour and slow, not joyful and light. Carolling in jubilation at Christmas was something of a popular rebellion against the sombre music of the liturgy. We can imagine the people singing it and dancing to an up-beat, accompanied by the folk instruments of the times.

Colman (if it was he) has no kind words for the woman he had bought the sheet from: “A poor woman with two children bundled at her back and one in her arms, and who, I am persuaded, was very far from knowing what she said.” What is the profound theology of the carol to a man who finds his equals not on the street?

He sounds not unlike Dickens’ Scrooge as he grandiosely bemoans “having my ears pestered in every street this last week, by numberless women and children singing what they called Christmas carrols, but what, if I had heard them in an alehouse, or if they had been sung by drunken people in a night-cellar, I should have thought the most bare-faced reflections and the grossest buffoonery upon the most sacred subject that could be devised by the devil himself”.

His sentiments evidently, and rightly, were not shared by his contemporaries nor by the successive generations of anglophone Christians that came after, for “God Rest You, Merry Gentlemen” has remained one of the most popular Christmas carols.

By the time the Victorians got into the Christmas spirit, the carol even came to be sung in churches, for its message is indeed a profound reflection on the Nativity of Our Lord.

After his conversion, Scrooge might have joined in the singing. Colman, on the other hand, would be aghast at that, notwithstanding all invitation to let nothing him dismay.