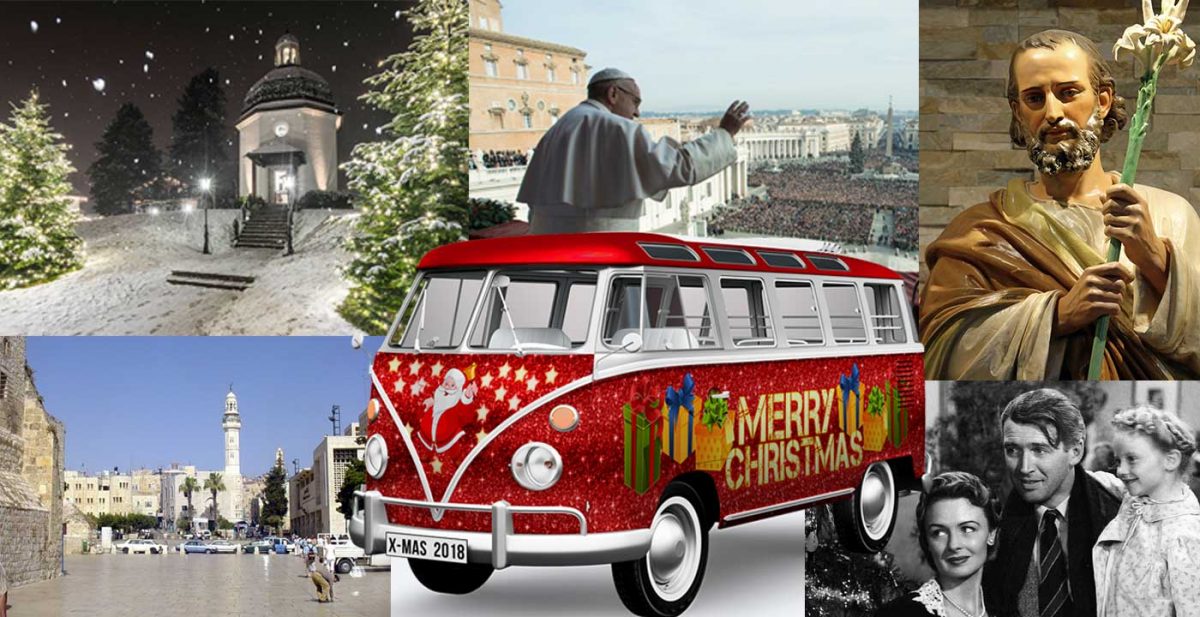 25 questions to test your Christmas knowledge! Compiled by Günther Simmermacher

1 In which country was the Christmas hymn “Silent Night” written 200 years ago?

a) Austria b) Germany c) Hungary

2 On which date do Orthodox Christians celebrate Christmas?

3 In St Matthew’s genealogy, of whom was Joseph, the husband of Mary, begotten?

a) Jacob b) Josiah c) Judah

4 According to the Christmas classic movie It’s A Wonderful Life, what happens every time a bell rings?

a) an angel gets his wings

b) a child is born

c) a soul is saved

5 At Christmas the pope delivers a blessing known as urbi et orbi. What does that mean?

a) to all of faith and goodwill

b) to the city and the world

c) to all men and women

7 Which is the earliest year in which Jesus could have been born?

8 What is the German name for Father Christmas?

9 Which popular Christmas carol features the line “Joyful, all ye nations, rise/Join the triumph of the skies/With th’ angelic host proclaim/Christ is born in Bethlehem!”

a) Angels We Have Heard On High

b) Hark! The Herald Angels Sing

10 In Charles Dickens’ A Christmas Carol, what does the reformed Ebenezer Scrooge buy the Cratchits?

11 What does the name of the city of Bethlehem mean?

a) House of Bread

b) House of Wisdom

12 Which country declared Christmas a public holiday following a visit by a pope?

a) Cuba b) Poland c) Vietnam

b) “Here’s to them, underneath that burning sun, do they know it’s Christmas time at all?”

c) “Well, tonight thank God it’s them instead of you”

14 What bird forms part of an Irish Christmas tradition with a procession on St Stephen’s Day?

a) Dunnock b) Robin c) Wren

15 According to St Luke, who called for the census that brought Mary and Joseph to Bethlehem?

a) Augustus b) Phasael c) Quirinius

16 Which is the odd one out: Prancer, Blitzen, Cupid, Rudolph, Runner, Dancer, Comet?

a) Cupid b) Dancer c) Runner

17 In which century did Pope Julius I officially set the date for Christmas?

18 In which country may people wish you Merry Christmas by saying: “Melikam Gena!”

a) Ethiopia b) Ghana c) Mali

19 What did my true love give to me on the seventh day?

20 How many animals does St Luke list as being present when Mary gave birth to Jesus?

22 In which country is a Julbord traditionally served for Christmas dinner?

a) Belgium b) Germany c) Sweden

23 In which century was the melody of “O Come All Ye Faithful” (or Adeste Fideles) composed?

24 In Syria, which animal is believed to bring Christians their presents?

25 What is myrrh, one of the three gifts the magi brought the baby Jesus?