Victoria Reaches for Dreams with Faith 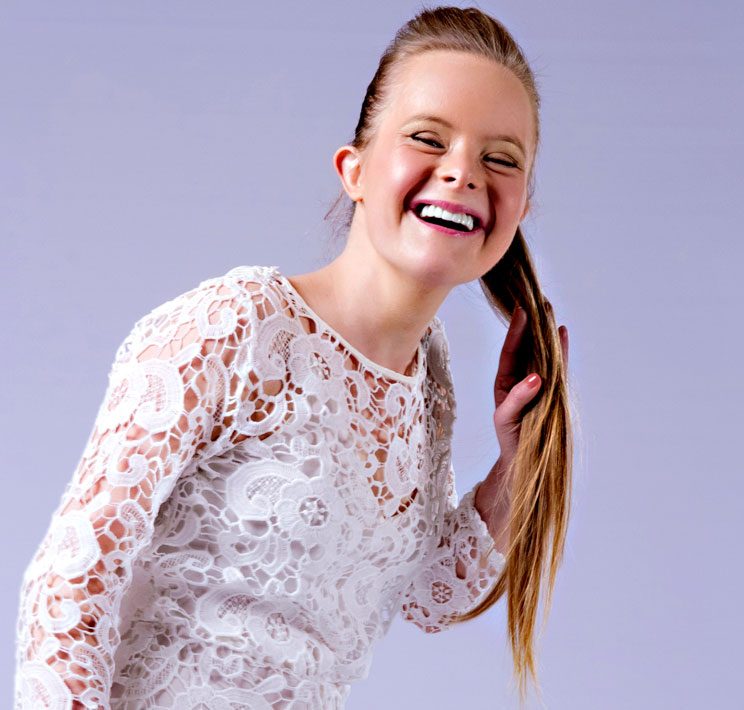 Victoria Giuricich, who would love to see Pope Francis at World Youth Day in Panama City next month. Her mother believes Victoria can inspire those who are differently-abled

A  young Catholic is following her heart to achieve her big dreams, and places her trust in God.

Victoria Giuricich, 20, wants to follow the path of her hero, Madeline Stuart, an Australian model with Down syndrome who has appeared on the catwalks of the London, New York and Paris fashion weeks.

Victoria, who herself has Down syndrome, believes that she will be able to achieve her dream of one day becoming a professional model, through hard work and her faith and devotion to God.

Ands she is already on her way. Recently she was given the chance to design and star in her own fashion show at SA Fashion Week, in front of an enthusiastic audience which included family and friends.

Victoria was born in Johannesburg in 1998 and went to school at Brescia House School in Bryanston, where she completed her matric in 2018.

She recently successfully completed a six-months course in modelling, and has taken on an apprenticeship in hairdressing. She has also shown great promise in gymnastics.

“I decided that I wanted to become a model when I saw Madeline Stuart who is my role model,” Victoria told The Southern Cross. “I want to be a commercial model and I want to become a runway model.”

And God’s presence in her life helps Victoria in her everyday activities. She talks freely about the importance of the Catholic faith in her life.

“I go a lot to Our Lady of Lourdes parish in Rivonia. I go there to see the priest whom I know very well, Fr Chaka Motanyane.”

Fr Motanyane was also in the audience at her fashion show.

“God helps me through my studying for the academy and to be a model. God helps me know what I need to do—and to have fun,” she said.

Victoria shares the Catholic faith with her agent, Lauren Winiecki, in daily life.

“Vicky and I read a prayer book every day. We do this every morning,” Ms Winiecki told The Southern Cross. “We listen to a lot of praise and worship songs on YouTube. Vicky and I also visit the church of the Resurrection in Bryanston every Wednesday when we go to drama. Vicky and I go into the church and have quiet time and pray.”

Victoria’s other big dream has been to attend World Youth Day in Panama City.

To make that dream a reality, she has been selling cupcakes, baked by her mother, to raise the necessary funds for herself and her brother, Andrea.

“We are almost done selling cupcakes and have raised enough money,” she said. “The flights have been booked and we are ready to go. We will be there for two weeks and I am very excited.”

She really wants to meet Pope Francis. “I want to take photos with the pope, if he’s not busy. If I meet him, they will probably say, ‘Are you looking for the pope?’ And we will say, ‘Hello, we are here; we are here to see the pope!’”

Victoria’s mother, Maria Giuricich, believes that her daughter’s will to succeed is a good example for others.

“I am immensely proud to say that she is my daughter. Her story may inspire those who believe that being born with this condition [Down syndrome] is a ‘life sentence’,” she said.

“Vicky’s story is one of self-belief and determination to follow one’s dreams. The only person who can hold one back, is oneself,” explained Mrs Giuricich.

“She is not dis-abled, but differently-abled,” she emphasised.

“My hope is that someone will give Vicky the opportunity to prove herself and in the process allow her to become a role model for anyone who ever doubts their capabilities.” 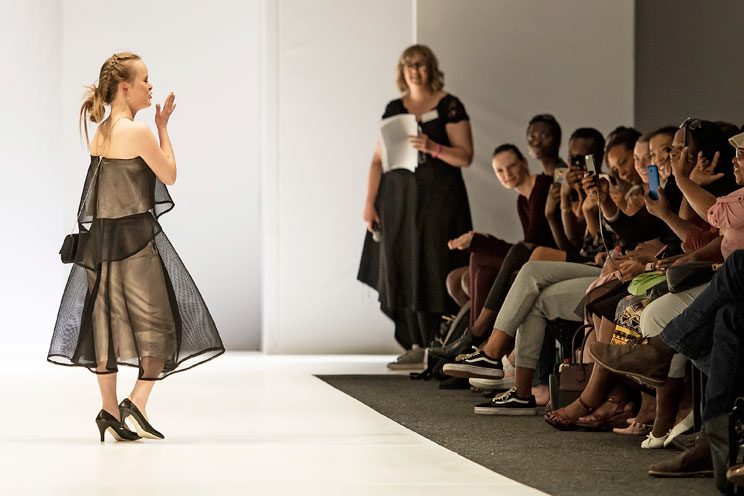 From paper and pencil to proudly posing in it: Victoria Giuricich models her own design at a fashion show during SA Fashion Week. The 20-year-old Catholic’s big dream is to make a career in fashion

The day of the fashion show was jam-packed with appointments and excitement.

“We first went to MAC Cosmetics in Sandton to have the make-up done,” Ms Winiecki said.

After the make-up was done, they went straight to the venue and were shown backstage.

“Backstage was intimidating because a bunch of models were practising for their own shows—so it was all very overwhelming, but exciting,” Ms Winiecki recalled.

Victoria and her team then prepped for the show, assisted by the SA Fashion Week lighting and technical crew.

“The whole SA Fashion Week team was very accommodating, and it was amazing to have stage and staff included to help us with the show,” said Ms Winiecki.

A crowd of 70-80 people made up Victoria’s audience.

“The whole group of SA Fashion Week models actually came to sit in the audience to watch Victoria, and when she came out and walked, they went crazy for Vicky,” Ms Winiecki recalled.

“Victoria’s name was projected in lights on to the side of the stage  for everyone to see,” she said, adding: “It exceeded all our expectations.”

Although it was her first time on a runway, Victoria suffered no stagefright. “I do drama and I have been on stage, so I felt quite confident,” she said, noting that “the stage had my name and surname on it”.

She was also encouraged by the support of her family and friends in the audience.

“My cousins and family and friends were there. They didn’t go to work so that they could go to the fashion show. They said it was more important, and everyone was blown away!”

To Maria Giuricich, it was an eye-opener to see her daughter on the runway. “I was truly taken aback by how confident, capable and comfortable Vicky was in the field which she has chosen,” she told The Southern Cross.

“She was just as professional as the facilities which she was allowed to use. There was a warmth and enthusiasm that radiated from the audience who clearly were people who have been supportive of Vicky over the years.”

The fashion show was invaluable to Victoria, her agent noted.

“The fact that [SA Fashion Week] gave us that platform is amazing. It has put Vicky on their radar,” resulting in several invitations. “Everything’s moving ahead and Vicky’s becoming very popular.”

Victoria would like to model again, “if I have time, and I want to learn skills and keep on doing it. I know the work and I want to be a professional model. I am looking forward to it!”

And with her faith and strong devotion to God, as well as with the support of her family and friends, Victoria is sure that she can achieve it all.