What’s the Deal With Pentecostals? 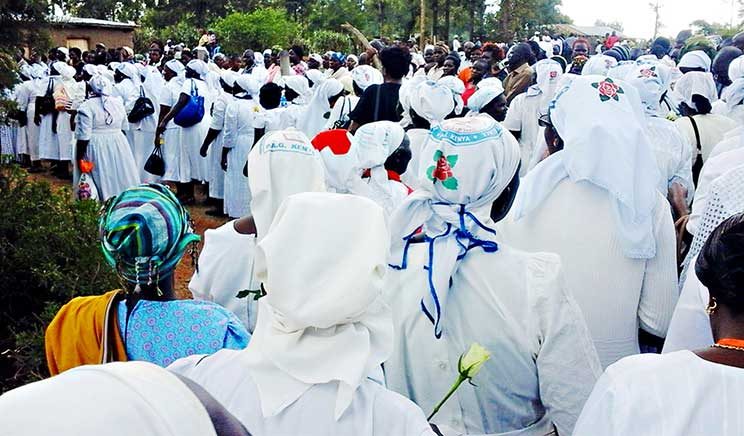 Members of the Pentecostal Church in Nairobi, Kenya, celebrate a wedding. Many Pentecostals propose polygamous marriages to ensure all women get husbands. (Photo: Doreen Ajiambo/CNS)

Pentecostal churches are spreading rapidly in Africa. In the first of a two-part series, PROF MICHAEL OGUNU examines Pentecostalism and the origins of the Catholic Charismatic Movement.

The word Pentecostalism can be understood in two ways. The first refers to the charismatic ministries of the Holy Spirit manifested on the day of Pentecost in Acts of the Apostles.

They are called Pentecostalism because the Holy Spirit began these manifestations in the Church on the day of Pentecost. They include speaking in tongues, healing, miracles, discernment of spirits, prophecy, wisdom and understanding (1 Cor. 12:1-9).

Understood in this sense, Pentecostalism is the experience of the outpouring of the Holy Spirit on the Catholic Church—an experience that is brought into focus every year when the Church celebrates the feast of Pentecost. The word is rarely used in this sense.

Pentecostalism can also be understood as a movement towards the activities of the Holy Spirit outside the Catholic Church.

In this sense, Pentecostalism is a relatively recent Christian renewal movement inspired by the first Christian Pentecost which is marked by the speaking in tongues, prophecy, and healing.

It is in this latter sense that the term will be used in this series of articles.

The Pentecostal movement began towards the end of the 19th century as a sect within North American Protestantism, promoted principally by Baptist and Methodist preachers.

As early as 1886 the “Latter Rain Movement” was founded in an American Baptist community. It preached a new, last outpouring of the Holy Spirit before the return of Christ.

Some years later, in 1892, the first ecstatic phenomena appeared among Baptists at Liberty, Tennessee, after they had received what they called “Baptism of the Spirit”.

The Baptist Free Church excommunicated those concerned and a Methodist minister formed them into the “Holiness Church”, which later adopted the title “Church of God”.

A whole series of similar foundations with the same name followed. One that acquired particular importance was the Pentecostal Community started by the African-American Pastor William Seymour at Los Angeles in 1906. It spread to a number of other US states and to Europe as well.

The individual Pentecostal churches in the United States united in loose federations as “Assemblies of God” and “Churches of God”. Later on, some also began using the name “Pentecostal Church”.

Initially these groups claimed that their followers directly felt the same grace of the Holy Spirit that was manifested in the charisms of the early Christians, for example, the gift of tongues and of healing.

These Pentecostal communities taught that it is possible to be completely exempt from sin on earth.

They preached an enthusiastic way of living piety which was often linked to ecstasy. Their Christianity had no dogmas because they considered that the Holy Spirit inspires the faithful directly in all that is necessary for salvation.

These Pentecostals also hold that the Holy Spirit intervenes directly in the private interpretation of the Bible, a principle common to all sects and some denominations of Protestant origin.

Hence they do not recognise the existence of a magisterium enlightened by God. Rather, they leave everything to religious individualism, especially in regard to the interpretation of the exact meaning of the word of God.

There are countless Pentecostal groups vying with one another in their emotional extremism. Within the diversity of their potentially infinite doctrinal views, the different sects coincide in rejecting infant baptism and also confirmation. Instead they call for a “baptism of the Spirit”.

Within the institutionalised Protestant sects, charismatic groups were first set up among the Episcopalians (as Anglicans are called in the US) in 1958, then in the US Lutheran Church in 1962, and five years later among Presbyterians.

Here, too, these different Protestant sects affirmed that one can experience the phenomenon of speaking in strange tongues, that is, glossolalia. The first groups to accept the phenomenon were the Baptists and the Methodists, from which the two founders of the Pentecostal Church had been expelled in 1892.

By 1963, speaking in strange tongues was fully in vogue in American Protestantism.

That same year,  after serious study, Episcopalian Bishop James Pike of California prohibited his subjects from participating in Pentecostal meetings and declared that manifestations of glossolalia constituted a grave danger for the Christian faith of those who cultivated them.

Mgr Konrad Algermissen, a pioneer of Catholic ecumenical studies, in his verdict on the Pentecostal movement declared that “there can be no question of a second outpouring of the Holy Spirit bestowed through ‘Baptism of the Spirit’ or ‘Anointing of the Spirit’”.

“Man, who is born again through grace and baptism or penance, and is thus objectively sanctified, cannot attain here on earth the perfect subjective sinlessness and sanctity promised to its members by the Pentecostal movement,” Mgr Algermissen wrote.

The Pentecostal or Charismatic Movement began among Catholics in 1966 with Ralph Keifer and Patrick Bourgeois, laymen and theology lecturers at Duquesne Catholic University in Pittsburgh, Pennsylvania.

Both men attended a congress of the Cursillo—a Catholic apostolic movement that originated in Spain—where they met Steve Clark and Ralph Martin who were student activists in St John’s parish, East Lansing, Michigan.

By this time Clark was reading a book titled The Cross and the Switch Blade by Protestant Pastor David Wilkerson.

This book describes how Wilkerson, out of his inner impulse, abandoned his parish ministry with its salary to minister to drug addicts, prostitutes, alcoholics and juvenile delinquents.

Another book which influenced them was the one read by Ralph Keifer, titled They Speak in Other Tongues by John Sherrill. The book describes the history of the Pentecostal communities and spiritual renewal within Protestant denominations.

Faced with apathy and unbelief among college students, Keifer and Bourgeois realised that they needed the kind of power which Wilkerson appeared to have.

The Cross and the Switch Blade made it clear to them they needed the Holy Spirit for remarkable acts of Christian charity and zealous Christian activity.

At a prayer meeting of a Protestant Pentecostal prayer group on January 13, 1967, they requested baptism of the Holy Spirit and were excited to discover that they could speak in strange tongues.

Returning to Desquesne University, they initiated other Catholics into the Pentecostal rite, and the movement grew rapidly.

Soon there were also groups at the University of Notre Dame and other Catholic centres, and they spread across the world, including South Africa.

Next week: Why Catholics drift to Pentecostal Churches, and what we can do about it.