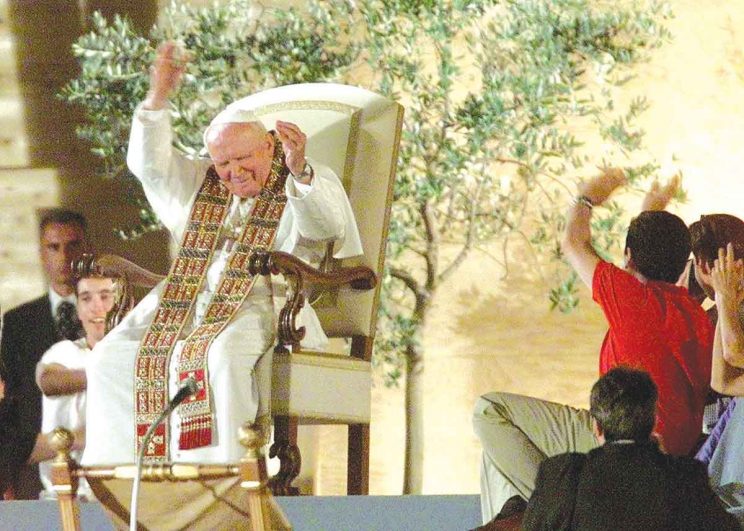 World Youth Day will be held in Panama City this month. In the third part of his series on past World Youth Days, GÜNTHER SIMMERMACHER recalls the last two WYDs of St John Paul II and the first of Pope Benedict XVI.

For the jubilee year 2000, Pope John Paul II called the world’s youth to the Church’s HQ: Rome. He would preside over one more edition of the event, in Toronto in 2002.

The next one, in 2005, was the first of three for Pope Benedict XVI — of all things, in his home country.

In the great Jubilee Year, the Church celebrated Jesus’ 2000th birthday (though the real anniversary had likely passed a few years earlier). So it seemed right that the World Youth Day gathering should be hosted by the Eternal City.

Recognising that the Jubilee Year celebrated the birth of the Son of Man, the theme for WYD 2000 was “The Word became flesh and dwelt among us” (Jn 1:14).

Many people believe that Catholicism in Europe is a dying faith. There are great problems, of course; still two million young people participated in the Mass at Rome University’s Tor Vergata campus.

At the Saturday night vigil, Pope John Paul II gave a discourse on the nature of faith. Even in his frail state, the 80-year-old pontiff was able to connect with the youth. His reflection on faith was not so much a sermon as a conversation—even if the pope himself admitted that it was “too long”.

Discussing the stages of a developing faith, he said: “First there is the grace of revelation: an intimate, ineffable self-giving of God to man. There then follows the call to respond. Finally there comes the human response, a response which from that point on must give meaning and shape to one’s entire life.”

Confession in the Circus Maximus

Despite the oppressive August heat throughout the five-day event — reaching temperatures of up to 38°C — the pope was in good form. According to a news report at the time, he “joked, laughed, shed a few tears, and even sang an impromptu prayer” at the closing Mass.

During the Vigil, the pope listened to delegates from countries with poor human rights records tell their stories.

Significantly, the crowds throughout WYD applauded and cheered the pope at all the right places, giving lie to the idea that they were there only to bask in the glow of papal celebrity.

The pope said that he felt “invigorated” by his contact with young people, who often chanted “Long live the pope”. At one point, he responded: “He’s already lived 80 years, but young people always want him to be young. What’s to be done?”

WYD participants had the rare opportunity to go through St Peter’s basilica’s Holy Door, make confession in the ancient Circus Maximus, attend catechesis sessions delivered by bishops, join the torchlit Way of the Cross culminating in the Colosseum (half a million took part in that), and be hosed down by firemen during an opening event in St Peter’s Square (attended by 400000 people, with another 700000 at the basilica of St John Lateran).

The numbers of pilgrims was so huge, WYD caterers called it “the largest-ever food-preparation operation”.

Music: “Nkalakatha” by Mandoza; “Shackles (Praise You)” by Mary Mary; “There You Go” by Pink.

On TV: Charmed; Touched By An Angel; 7de Laan. 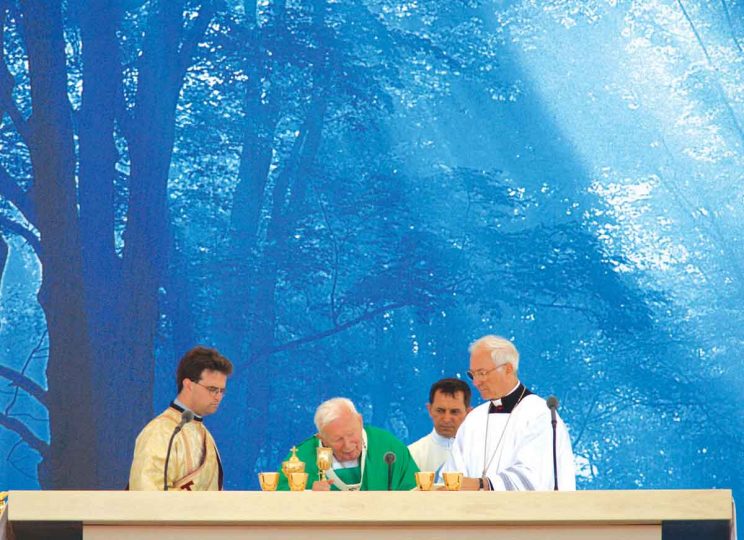 In 2002 WYD returned to North America. The theme for World Youth Day in Toronto, Canada, provided young Catholics with a definition for their identity within the Church: “You are the salt of the earth…you are the light of the world” (Mt 5:13-14).

Pope John Paul summed up the significance of the theme in his message to the world’s youth in preparation of WYD: “In ancient times, salt and light were seen as essential elements of life.” Likewise, the youth is an essential element of life, with the power to shape a better future.

A couple of days before leaving his holiday residence of Castel Gandolfo near Rome for Toronto, Pope John Paul suggested that the youth, as the “light of the world”, can lift the pall thrown over the world by the 9/11 terrorist attacks ten months earlier.

“The Christian youths who will meet in Toronto are ready to respond to Christ, ‘Look! Here we are! In keeping with your word and without fear, we will cast the nets of the Gospel’,” the pope told a general audience.

He expanded on the theme in Toronto: “The aspirations that humanity nurtures, amid countless injustices and sufferings, is the hope of a new civilisation marked by freedom and peace. But for such an undertaking, a new generation of builders is needed,” he said at the vigil.

Having thus expressed his doubt that the contemporary crop of those in power can produce such a social revolution, he called on the youth: “You must be those builders. The future is in your hearts and in your hands.” That future, he said, should be “a civilisation of love”.

At one of the many talks held over three mornings by 500 bishops and cardinals, Archbishop James Weisgerber of Winnipeg, Canada, explained how youths can contribute to the future.

Although “politics is corrupt”, those who live in democratic societies must get involved in political structures (presumably without themselves being corrupted) to bring justice to the poor.

The closing Mass attracted a creditable 800000 people — despite rain and a temperature of 33° — while organisers catered for 400000 people taking part in the different WYD events.

Feeding the pilgrims is a perennial WYD challenge. In Toronto, packaged meals were prepared for six people, which meant that pilgrims had to share the parcels in groups of six. The feeding-of-the-multitudes plan worked well: not only were food queues reduced, but pilgrims had to eat together, sometimes with strangers who would become new friends.

As it was on previous WYDs, South Africa and Botswana were represented—but many African Catholics who wanted to go were denied visas by Canadian authorities.

Among the South Africans who travelled to Toronto was Grace Griffiths from Klerksdorp. Grace thought she had no chance of going until she won a competition for a prize of her own choosing on 5FM DJ Mark Gillman’s morning show.

She later wrote about her experiences in The Southern Cross: her experience of the “Days in the Dioceses” in Vancouver, of meeting people, of singing “Shosholoza”, navigating Toronto, morning catecheses and liturgies, afternoon entertainment (from Taizé and pop concerts to dance recitals), the Way of the Cross, night Vigil, Mass.

“The experience was an opportunity to meet amazing people from around the world, and publicly express our faith and the fact that ‘I am Catholic’,” Grace wrote.

At the end of WYD 2002, Pope John Paul announced that the next WYD would be held in Cologne, Germany. Nobody knew that the pope presiding over that event would be a German, coming home to his country just three months after his election. 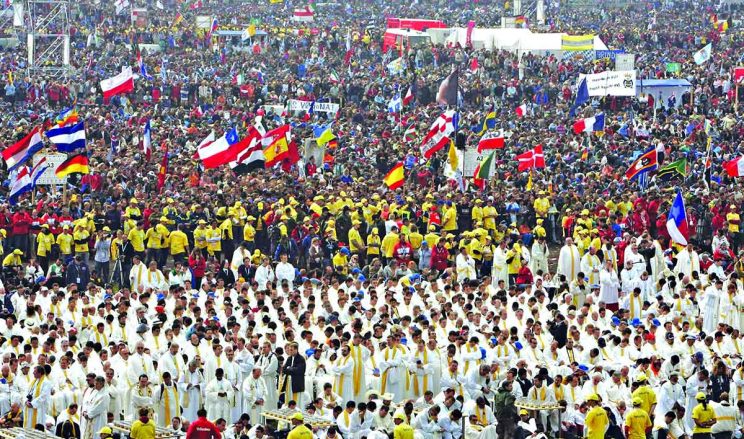 As he travelled to Germany, the eyes of the world were on the new pope; every gesture and every meeting was analysed.

Apart from WYD business, Pope Benedict had other engagements; the most profound, perhaps, his visit to a synagogue.

The other big question was how the new pope would relate to the youth.

Pope John Paul, who had died in April 2005, always enjoyed a special relationship with the youth. At successive WYDs, the pope and the youth, which sometimes came in their millions, had created a unique energy. How would the shy, bookish Pope Benedict follow such a big act—especially in Germany, where the former Cardinal Joseph Ratzinger was not particularly popular, despite being the first German pope in modern times?

The dynamics between pope and crowd certainly had changed. Where Pope John Paul’s presence and free banter created fervour, Pope Benedict’s approach was dignified and quiet. For this he received the crowd’s respect.

And that crowd was big. About 400000 registered pilgrims from all over the world attended the week-long events; a million were at the closing Mass on the Marienfeld, just outside Cologne.

These numbers eclipsed those of WYD ‘98 in Paris—the previous time the event had taken place in a central European city. It showed that, contrary to the critics’ view, the youth did not come in such great numbers to successive WYDs just to see John Paul Superstar (as Time magazine once dubbed him).

Though the personality of Pope John Paul certainly was attractive, WYD in Cologne showed that the youth came to celebrate and deepen their faith in communion with other young Catholics, to feel the unity of the Universal Church. This, after all, is what WYD is about.

Writing in The Southern Cross about their experiences at WYD ‘05, Kelsay Hyams and Gustavo Corrêa neatly summed up that purpose:

“Universal Church: that was a concept that we all grasped in a very special manner! From the pathways crowded with people to the silent prayer in the many chapels of adoration, from the beats of our very own African drums to the delicate sounds of the Indian cithara, the soft Bolivian flute and the Gregorian-inspired Taizé chants, we could almost touch this universality, present in the liturgy of the main celebrations.”

Pope Benedict might not have had crowds chanting his name for minutes on end, as his predecessor often did (“JP2, we love you!”), but he did manage to build a relationship with the youth, in his own quiet way.

This was shown when he had lunch with 12 youths from six continents. In conversation, he took a real interest in his lunch companions. And when he was served a plate of fish, he declined and asked to be served the same as his guests: omelette and apple strudel.

At the closing Mass, Pope Benedict attended to one of the cornerstones of his pontificate: evangelisation by example, rather than by aggressive marketing. The pope showed he was aware that many young people abandon the Catholic Church for glitzier Evangelical churches.

“If it is pushed too far, religion becomes almost a consumer product. People choose what they like, and some are even able to make a profit from it. But religion constructed on a do-it-yourself basis cannot ultimately help us.”

Some of the antics in Cologne certainly bemused the pope, such as the Argentine artist who juggled straw hats and flaming torches to symbolise prayer as a dialogue between God and man.

At the end of WYD ‘05, Pope Benedict announced that the next World Youth Day would be held in Sydney, Australia, which reportedly had defeated what must have been a discreet South African bid.

Music: “Bad Day” by Daniel Powter; “Since You’ve Been Gone” by Kelly Clarkson; “Doo Be Doo” by Freshlyground.

On TV: Desperate Housewives; Scrubs; Walk The Plank (which this SA game show soon did).

In a Fortress with the Crusaders