Priest: Prayer Lifts up those Struggling with Alcoholism 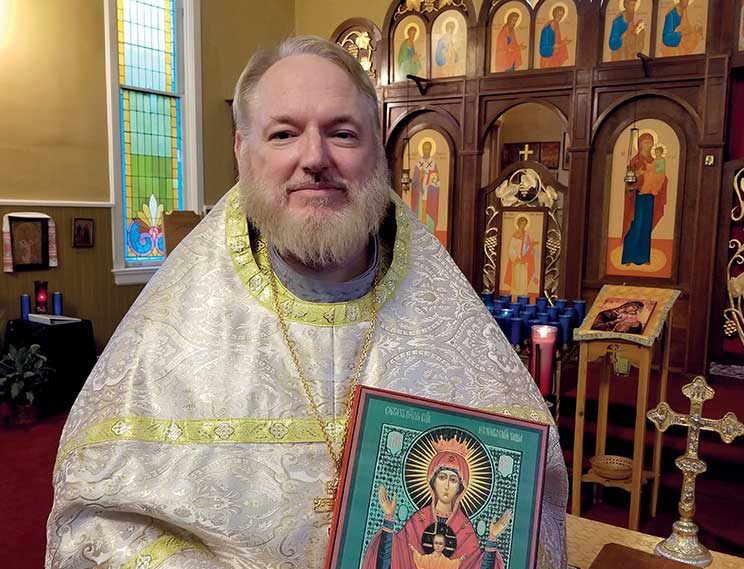 Father Bryan Eyman poses with the icon of the Theotokos, the Inexhaustible Cup, Healer of Alcoholics, at St. Athanasius the Great Byzantine Catholic Parish in Indianapolis, where prayers of healing are offered for those struggling with alcoholism. (CNS photo/Father John Russell via Horizons)

By Laura Ieraci – Numerous organisations, both private and public, seek to help those who struggle with substance abuse through programming and support services, but Father Bryan Eyman has committed to a different approach: prayer.

Confident in the power of Jesus to satisfy every thirst, Father Eyman has been offering prayers for people struggling with alcoholism for the past 20 years.

Once a month, he celebrates an Eastern Christian Marian prayer service – an akathist – dedicated to the Mother of God, the Inexhaustible Cup, Healer of Alcoholics, at St. Athanasius the Great Byzantine Catholic Church, where he is pastor.

According to the National Survey on Drug Use and Health, 74 percent of the 19.7 million Americans who battle substance abuse are alcoholics. The National Institute on Alcohol Abuse and Alcoholism also reports that about 88,000 people die of alcohol-related causes in the United States each year, making it the third-leading cause of preventable death in the country, after tobacco and poor nutrition.

With the situation as grave as it is, the church has an important role to play in ministering to this marginalised group, said Father Eyman.

The Eastern Catholic priest attributes his commitment to prayer for the healing of alcoholics to his mother, Margaret Kelly Eyman.

“She was an employee in one of the first alcohol treatment centers in in the world,” he said.

His mother worked with Sister Mary Ignatia Gavin at Rosary Hall Solarium at St. Vincent Charity Medical Center in Cleveland. Sister Ignatia, along with Dr. Bob Smith, founded Alcoholics Anonymous (AA). The nun was a family friend, and Father Eyman recalled being an altar server at her funeral.

In 1988, while he was pastor at St. John the Baptist Byzantine Catholic Church in Minneapolis, Father Eyman began in this area of ministry by being available for people in the fourth and fifth steps of AA’s 12-step recovery program. These two steps consist of members telling another person about their addiction and seeking to make amends for the harm they might have caused, he said. He noted then, as now, the shortage of priests to help Catholics in the AA program.

In the late 1990s, his ministry with alcoholics took an unexpected and more prayerful turn. It was the advent of the internet, and one of his first online searches produced a Russian icon of the Theotokos, the Inexhaustible Cup, Healer of Alcoholics. It came with the akathist prayer service that was translated from Russian into English.

He read about the miraculous healing associated with the icon. In late 19th-century Russia, a severe alcoholic, debilitated by his addiction, had a dream in which he was instructed to go to a particular monastery and ask for this icon. Upon praying before it, he was healed of his alcoholism, after which many other alcoholics were healed before the icon. This particular monastery was closed under communism, and a family hid the icon for safekeeping. The icon reemerged after communism, and the prayer service linked with this devotion restarted.

Moved by this story and sensing a call to action, Father Eyman began praying the akathist at St. Andrew Parish in 1999, before the AA meetings, and AA members were invited to participate.

He continued the prayer service when he was assigned to St. Mary Byzantine Catholic Church in Marblehead, Ohio, and then at St. Athanasius the Great, where he serves currently. Prayer services are held usually on the third Wednesday of each month, unless there is a scheduling conflict.

Attendance varies from month to month, from four people to 25 people, but swells to about 100 for the prayer service that marks the feast of the icon, he said. The service includes praying for people struggling with alcoholism by name. Requests from people to include their loved ones continue to grow, he said.

“We get names from all over and we only use first names,” Father Eyman said. “For me, it’s not a matter of the number but the commitment to prayer to benefit people we may never meet. We just try to be faithful in doing it, with confidence that Christ will bring about the healing, if we are open to it,” through the intercession of Mary.

Father Eyman said some people have received complete healing from the prayer service.

“In at least four cases, they have lost the craving for alcohol,” he said. Others, even from different religions, have found the prayer “very moving and encouraging as they walked through the steps” of AA and began to seek healing from alcoholism from the Mother of God.

Father Eyman said the spiritual component to recovering from addiction “is very important for people to connect with, especially in the Catholic tradition, (where) there is forgiveness.”

“When we repent and decide to change and pour that reality out to another person, that’s when healing can begin,” he said.

“Our spiritual life and sacramental life as Catholics can be tied in with our physical well-being and (we can) help people make that connection and see that inner dependency,” he said. “It’s basically people in need of God.”

Father Eyman said he would encourage more priests to pray the service in their parishes. The impact of alcohol abuse on individuals and families is grave and “it runs the gamut,” from “prayerful priests to outright atheists,” he said.