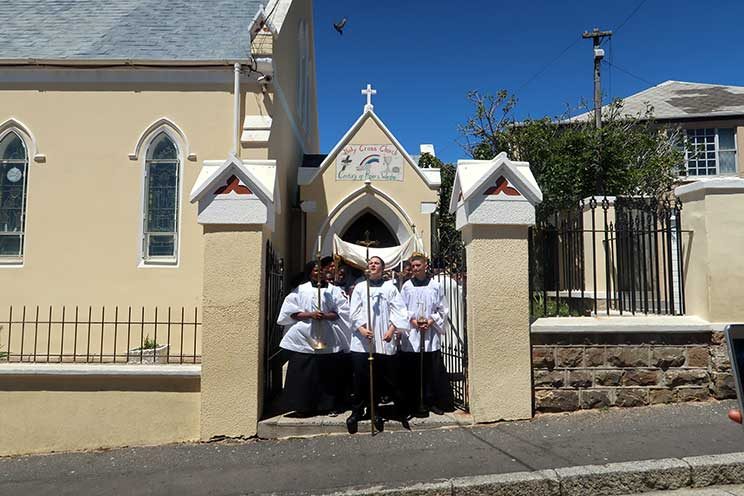 There are many paths to the priesthood; for Rev Runaine Radine, serving at the altar was one of them. (Photo: Günther Simmermacher)

By Rev Runaine Radine – During Lent, and especially Holy Week, I always think about the time I was an altar boy. In my home parish, as it is in most parishes, special training took place at those times in order to ensure that the ceremonies of Easter are carried out with precision.

Long before I learnt the technical terms, such as rubrics, I knew that things just had to be done by the book.

To emphasise the seriousness of these celebrations, the parish priest would be present at the rehearsals, often conducting them himself. This was something huge for us young ones—it gave us time to interact with the revered Father outside the confines of the liturgy.

But perhaps more than that, it meant that after rehearsals, we expected a cool drink and a biscuit from the presbytery! This was the least he could do; after all, we were indispensable (or at least so we thought; I mean, Father could not pull off an Easter Vigil with all its intricate parts without us!).

What was at first merely following the rules—walking or bowing in this or that manner—soon became spiritual, and this discipline influenced my life even beyond the liturgy.

Little did I know that the experience of being an altar server in general was shaping my vocation to the priesthood: being near the priest in the sacristy or sanctuary, vesting for Holy Mass, making priestly gestures such as folding the hands in prayer, forming the procession, attending to the Gospel as it is proclaimed, bringing bread and wine to the altar, swinging the thurible during the consecration, receiving Holy Communion at the foot of the altar, thanksgiving after the Mass.

All of these were slowly planting and nourishing the seeds of a priestly vocation.

Fast forward to Good Shepherd Sunday, or World Day of Prayer for Vocations, on the fourth Sunday of Easter.

As seminarians we were invited to parishes to share our vocational stories with young people. Very often it was discovered that most of us served at the altar and that this was monumental in discerning the call to priesthood.

Another common trend in vocational stories is the example of somebody—a priest or religious or some member of the family, especially a mother or grandmother, or someone in the parish community—who, hopefully without undue pressure, posed the question: “Have you ever thought about being a priest?”

This then sets the discernment process in motion.

And this question returns again and again in the discernment process. When one applies to the diocese, for instance, the vocations director and the bishop will ask why you want to become a priest. Even in the seminary, formators will continuously ask the same question, with different emphases at the various stages of formation.

The new Ratio Fundamentalis (or “The Gift of the Priestly Vocation”) on formation of future priests, issued on December 8, 2016, by the Congregation for the Clergy, considers the period when one studies philosophy in the seminary to be the stage of discipleship, or following Christ.

After that, the years of theological studies is the stage where one strives to become configured more closely to Christ.

The discernment of the priestly vocation will therefore focus on these aspects and later, after seminary formation and while preparing for ordination to the priesthood, the emphasis will be on pastoral synthesis of what was learnt in the seminary.

Thus, foundational experiences of the call, as altar servers or members of parish youth groups or sodalities of Our Lady, are  developed, sometimes purified, to ensure that aspirants develop a priestly identity, after the heart of the Eternal High Priest, Jesus Christ, equipped for the mission of evangelisation.

Perhaps the question nowadays, given the clergy sexual abuse scandal, will be: “Why do you still want to be a priest?”

This could very well be a daily question, since discernment, for the disciple of Christ, is a lifelong task.