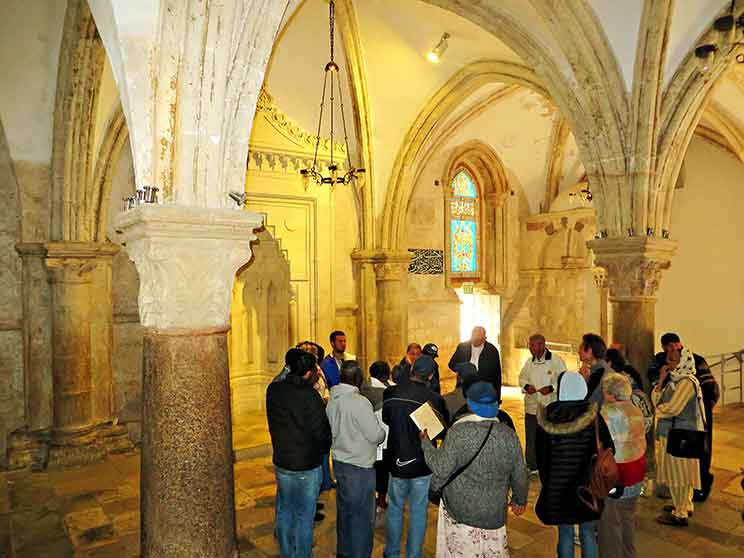 After being raised from the dead, Jesus Christ made several appearances, as Scripture recounts. Over two articles, Günther Simmermacher looks at ten of them.

Scripture records several appearances by Christ after the Resurrection. While some people claim that they are chronologically impossible to reconcile, one can reconstruct a plausible sequence of events from the Gospels, the Acts of the Apostles and Paul’s first epistle to the Corinthians.

Scripture records the encounters which various people had with the Risen Christ over the 40 days between the Resurrection from the tomb and the Ascension.

Presumably other unreported encounters also took place. For example, Christ wouldn’t have failed to look up his mother.

Much as Mary was aware of Jesus’ special nature, but as her son died on the cross, she must have been engulfed not only by grief but also confusion about what the manner of his death was supposed to mean. Would Christ have kept his grieving mother out of the loop?

His appearance to Mary, maybe his very first after rising from the dead, would also explain her absence from the group of women who came to the tomb on Easter morning.

Just as the Gospels don’t record every event in Jesus’ life—John’s Gospel points out the obvious truth that “there was much else that Jesus did”—so they wouldn’t necessarily detail every encounter with the Risen Lord.

One mystery is what physical appearance the Risen Christ took. Neither Mary Magdalene nor the two dejected travellers on the road to Emmaus recognised him. Likewise, the disciples didn’t always immediately recognise him either—so Christ obviously didn’t look as they had known him.

At the same time, Jesus breaks bread at Emmaus, and on two occasions is reported to be eating fish, and he invites people to touch his body. So this obviously is no ghost.

Scripture gives us at least ten encounters people had with the Risen Christ. Here I will try to synthetise the various accounts for the purpose of one coherent narrative. 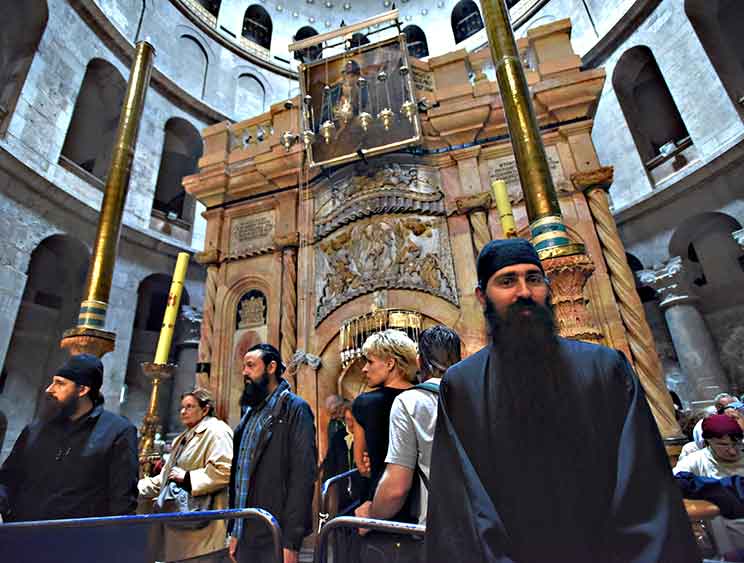 Encounter 1: At the tomb

After the Sabbath, Mary Magdalene, Mary Mother of James, and Salome (or Joanna;  women seemed to be interchangeable to the evangelists) go to the tomb to finish the burial rituals for their executed leader. But as they arrive at the tomb, they find the stone has been moved from the entrance.

Mark has the women looking inside the tomb. There, “they saw a young man in a white robe seated on the right-hand side”, telling them to inform the disciples that Jesus had risen (Luke says they are “two men in brilliant clothes”).

They do as told (Matthew has the women meet the Risen Lord on the way, which causes a chronological problem), and Mary Magdalene returns to the tomb with Peter and John.

Once Peter and John have observed the scene, they take off, leaving Mary in the garden. There she is being addressed by a stranger. “Are you the gardener?” Mary asks him politely. The man simply says, “Mary!”, and she recognises him as Jesus. He sends her off with the task of informing the others that she has seen the Risen Christ.

History and archaeology show that the tomb was in what is now the church of the Holy Sepulchre, in Jerusalem’s Old City. The tomb is enclosed within a structure, called an edicule.

Inside, the ante-chamber of the tomb is called the chapel of the Angel, with the stone on which the “young man in a white robe” is said to have sat.

Mary Magdalene’s encounter with the Risen Lord can be located outside of the edicule—perhaps exactly where pilgrims wait to enter the tomb.

We will get to the encounter on the road to Emmaus next, but we need to get ahead of ourselves for a moment.

Cleopas, the follower of the Nazarene on the Emmaus road whom the Gospels name, seeks out the Eleven to tell them about his experience of meeting Jesus, risen from the dead.

In Luke’s Gospel, they believe him, because there’s a precedent: the Risen Lord, they point out, had also appeared to Simon Peter.

We know nothing of the circumstances or content of that encounter, but presumably Christ appeared to Peter some time after Mary Magdalene saw him at the tomb in the morning, and before he joined Cleopas and his companion on the road to Emmaus. 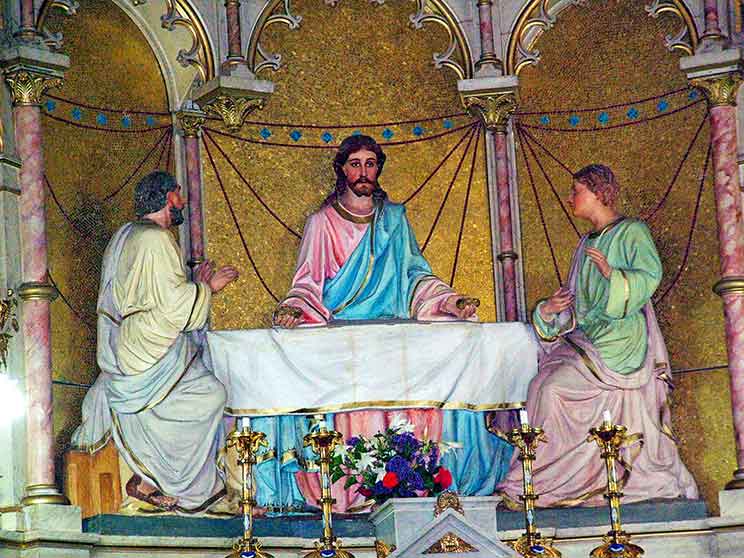 A representation of the Risen Lord breaking bread with the two followers at the Franciscan Emmaus in Qubeibeh, Palestine

The two disciples, Cleopas and the unnamed companion, are dejectedly trudging along the long road to Emmaus when they are joined by a stranger who, it turns out, isn’t a stranger at all.

There’s no need to recount in detail a story we all know very well. After some confusion as to the stranger’s identity, Christ breaks bread with them and then suddenly vanishes.

Nobody knows for certain where Emmaus was, other than it was west of Jerusalem. Luke says it was 60 stadia (10-12km) from the Holy City. There are at least four claimants for being the real Emmaus.

The most famous of them is at the Trappist monastery at Latroun, about 30km from Jerusalem. The Franciscans, who are the experts on the Holy Land’s New Testament sites, have their Emmaus church in the Palestinian village of Qubeibeh, 11km from Jerusalem.

There are those who suggest that the Road to Emmaus Encounter didn’t actually happen but serves as an allegorical device. But it would seem to be a curious ploy by Luke to refer to the older man in the story specifically by what was an uncommon name—unless a man named Cleopas actually reported the encounter. Had he made up that story, Luke would have inserted a more generic name.

According to Catholic tradition, Cleopas was in fact the brother of St Joseph (and therefore Jesus’ uncle). It is said that he was later martyred outside his house for proclaiming that Jesus was the Messiah.

As for the anonymous sidekick, according to some early writings it was Cleopas’ son Simeon, who later became the bishop of Jerusalem.

We last saw the Risen Christ on the road to Emmaus but we don’t know his whereabouts right now, as evening falls and Cleopas hurries back to Jerusalem to report his pretty big news. Perhaps the Risen Jesus is giving his grieving mother a comforting surprise visit.

Cleopas and his companion are presently in the Upper Room to report their encounter to the ten disciples.

In Luke, as mentioned, the disciples are not surprised to hear this peculiar story because Peter had seen the Risen Lord, too. In Mark, the disciples don’t believe them. (Matthew rushes through the post-Resurrection events like a writer who’s about to hit the editor’s prescribed maximum word count; John omits the Emmaus scene altogether).

Whether or not they believe Cleopas, things suddenly get a bit weird.

“They were still talking about all this when [Christ] himself stood among them and said to them, ‘Peace be with you!’ In a state of alarm and fright, they thought they were seeing a ghost,” Luke tells us (24:36-37).

Mark has the disciples “at the table” at that point, suggesting that it’s suppertime.

Christ reprimands them for having believed neither Cleopas nor the women witnesses. But having cleared the air on that point, the Lord proceeds to reassure his friends that he is not a ghost but is truly risen from the dead.

Luke and John both note that Christ shows the disciples his injuries, and has them touch him. And to drive home the point, he has some fish for dinner. Ghosts don’t eat.