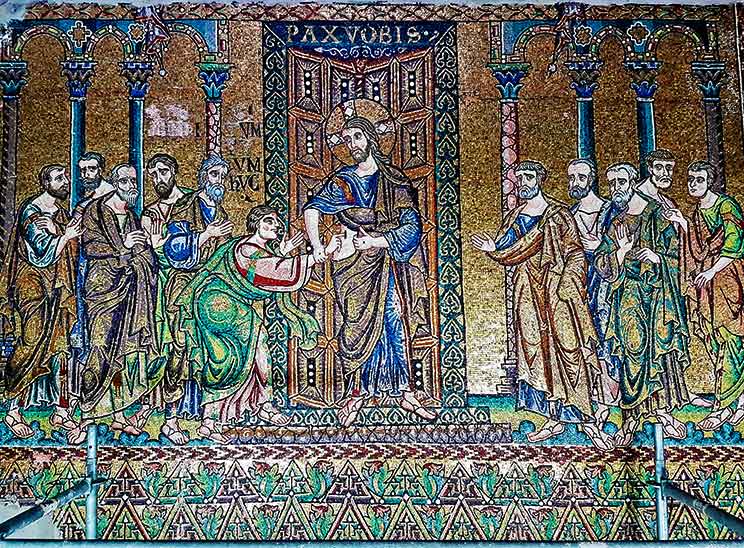 St Thomas sticks his finger into the wound of the risen Christ, depicted in a newly-restored 12th-century mosaic in the basilica of the Nativity in Bethlehem, West Bank. (All photos: Günther Simmermacher)

After being raised from the dead, Jesus Christ made several appearances, as Scripture recounts. In his second article, Günther Simmermacher looks at six more of them.

Last week we encountered the Risen Lord on four occasions: to Mary Magdalene at the tomb, to Peter at a place and time we don’t know, to the two followers on the road to Emmaus, and on Easter evening to the disciples in the Upper Room.

Today we return to the Upper Room, then follow the Risen Christ to Galilee, and return to Jerusalem. 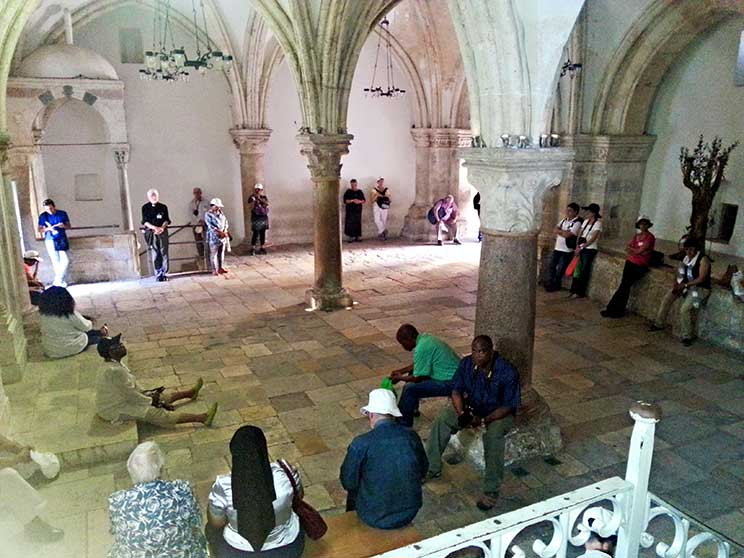 The Upper Room on Mount Zion, today a Crusader structure

Thomas is the desperado of the remaining Eleven. He didn’t hide in the Upper Room a week ago, and when the others told him that they had met Jesus risen from the dead, Thomas might have wondered — metaphorically, of course — what these guys had been smoking.

Eight days after those first four appearances of the Risen Lord, Thomas is reunited with the disciples in the Upper Room. Then Christ appears and calls his bluff.

We know the story well: Thomas sees the wounds and believes. Jesus then scolds him gently: “You believe because you can see me. Blessed are those who have not seen and yet believe” (Jn 20:25-19).

The Upper Room is an important place in the birth of Christ’s Church. It is here that he instituted the Eucharist at the Last Supper, here that he appeared twice to the disciples, and here that the Holy Spirit descended on the first Pentecost.

We know that the Upper Room was on Mount Zion, which then was within the walls of Jerusalem, but we can’t claim to know for sure the exact location. The original building has long disappeared, but pilgrims remember these events in a Crusader structure called the Cenacle.

We might not be sure that the Cenacle is the real location of the Upper Room, which in Jesus’ time probably was the banquet room of an inn. But archaeologists have found ancient pavements beneath the complex which houses the Cenacle. Etched into one piece of plaster on the pavement is the line: ‘O Jesus, that I may live…’

They have also found what appears to be a first-century house church, and these often were built on sites considered holy. This would indicate that this might indeed be the location of these history-changing events.

The exact timeline and geography is becoming a little unclear here.

St Paul in his first letter to the Corinthians makes a number of brief references to post-Resurrection appearances. As we are about to see, the exact sequence of these as listed by Paul might be jumbled, not that this matters much to the point Paul is making.

One of the appearances Paul mentions is to Jesus’ half-brother (or kinsmen of some kind) James, who seems to have been as much a sceptic about Jesus’ divinity as you might be if your goofy brother or cousin went about claiming that he was the Son of God.

Meeting the Risen Christ persuades James, who proceeds to take on the leadership of the Church in Jerusalem — and later suffers execution at the hands of the high priest.

Encounter 7: The fish breakfast in Galilee 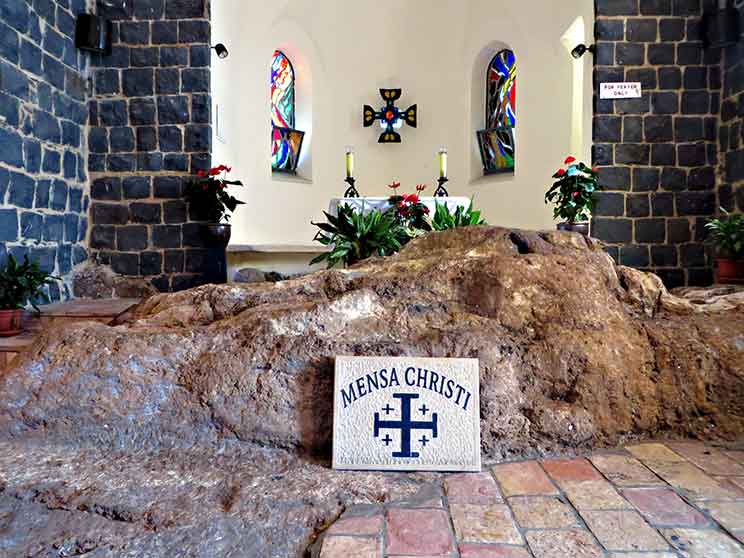 The rock on which the Risen Christ reputedly served the fish breakfast, inside the chapel of St Peter’s Primacy in Tabgha, at the Sea of Galilee.

Paul refers to a mass gathering attended by many still-living witnesses as the first of the Galilean post-Resurrection appearances, but before that, surely there was the third meeting with the disciples.

John’s account of Christ’s meeting with the seven fishing disciples on the shore of the Sea of Galilee suggests that this encounter was totally unexpected, which it wouldn’t have been had it been preceded by mass gatherings.

The narrative of this encounter is beautifully told by John (21:1-17), and we heard it just a few weeks ago at Mass.

Peter casually tells his friends: “I’m going fishing.” They say, “Cool, we’ll tag along.” And off they go for a night of fruitless fishing. Just another boring night on the lake. As the sun rises a fellow on the shore tells them to cast the net starboard. The trick works.

When Peter realises it is Christ who has been offering good fishing advice from the shore, he gets dressed (for he likely was bare in the water) and swims towards the Lord, leaving the others to collect the rich harvest of fish.

Having fed the disciples with the fish breakfast he made for them, Jesus entrusts the Church to St Peter with the words, “Feed my sheep.”

But before he does that, he has Peter swear a triple oath of love, an echo of the triple denial outside the Sanhedrin. Had they not cleared the air already during Encounter 2?

The whole scene took place at Tabgha, very near to the setting of another story of feeding, involving two loaves of bread and five fish.

Tabgha is named after seven springs which fishermen throughout the centuries have used to clean their nets with fresh water.

The rock on which Jesus reputedly served the breakfast is inside a small chapel built of black basalt stone, named St Peter’s Primacy. Next to the church is a boulder on which, according to tradition, Jesus stood as he offered his excellent fishing tips to those professional fishermen. That rock is known as Mensa Christi (Christ’s Table). 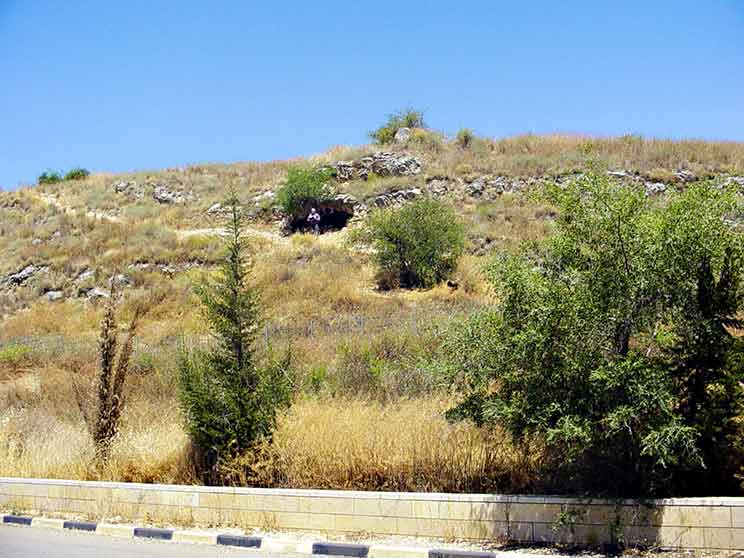 The Eremos cave on the slopes of the Mount of Beatitudes

We can now return to Paul, and his claim that the Risen Lord appeared “to more than 500 of the brothers at the same time, most of whom are still with us, though some have fallen asleep”.

Note how Paul is daring the people of Corinth to question these numerous witnesses, just about 25 years after the events he describes. That is recent enough to call on witnesses. Couldn’t you today locate witnesses of Nelson Mandela’s inauguration as South Africa’s president? Or people who were at Pope John Paul II’s 1995 Mass in Johannesburg?

Paul doesn’t tell us where this mass meeting took place, but many Holy Land scholars think that the crowds might have gathered at the foot of the Mount of Beatitudes, which rises near Tabgha.

The famous sermon from Matthew’s Gospel is commemorated on the top of that bluff, but more likely it was delivered (probably in more than one part) from a cave on the mount’s slope, known as Eremos, from where the acoustics echo clearly to the street below.

It is quite possible that the Risen Lord returned to this natural theatre when he appeared to the crowd of 500-plus people.

We are still with Paul, who runs through post-Resurrection appearances at breakneck speed.

He makes a distinction between Christ’s appearances to the Twelve (when they were 11), who were appointed the inner cabinet of the Nazarene’s movement, and that to “all the apostles”, which probably refers to the broader group of Christ’s followers, among whom we’d likely find Mathias, who soon would join the leadership as the replacement for Judas Iscariot.

These apostles are likely the “72 others” whom Jesus had sent out “ahead of him in pairs, to all the towns and places he himself would be visiting” (Lk 10:1).

The disciples are back in Jerusalem, and the Risen Lord has gathered them on the Mount of Olives (for the location, see page 10).

The poor guys have no idea what more extraordinary stuff they will be witness to next. But for now, Christ is issuing instructions. He tells them to remain in Jerusalem and wait.

“You will receive the power of the Holy Spirit which will come on you, and then you will be my witnesses not only in Jerusalem but throughout Judea and Samaria, and indeed to earth’s remotest end.”

The disciples are attentively following the proceedings, possibly shrinking a little at the unfriendly reception they might receive in hostile Samaria. Just then, Acts tell us, “he was lifted up while they looked on, and a cloud took him from their sight”.

We can picture these men staring open-mouthed at the sky, as Acts tells us, “when suddenly two men in white were standing beside them”.

They sound a lot like the same rather prickly pair who sat at the tomb 40 days ago: “Why are you Galileans standing here looking into the sky? This Jesus who has been taken up from you into heaven will come back in the same way as you have seen him go to heaven.”

So the disciples walk to their domicile, the place of the Upper Room, where Our Lady and others are waiting for them.

A couple of weeks later, at the first Pentecost, the Church would be born there, in exactly the way Christ had promised.