Dying Man: I Want to Come to the Light 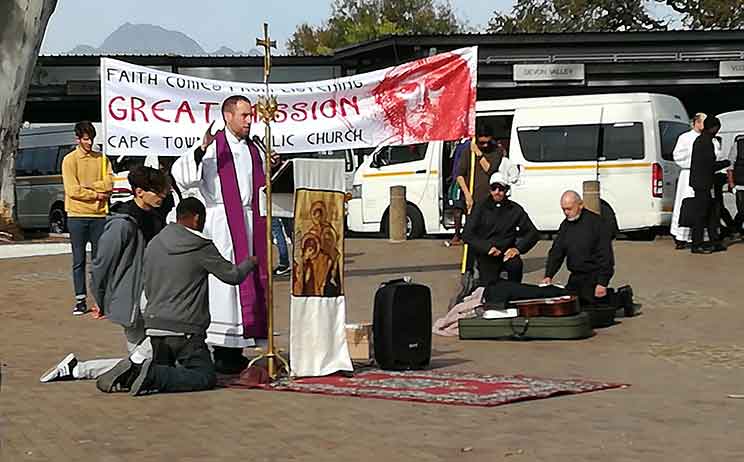 Fr Francesco Fabris sings the Gospel reading of the day in Stellenbosch in the Western Cape, while seminarian Mattia Poropat accompanies him on guitar, during this year’s Mission in the Squares, held by the Neocatechumenal Way in cities around the world.

A man dying of Aids approached missionaries during an event in Witbank and said: “I want to be clean and come to the light. Please call the priest to come and sit next to me because I don’t have any strength left in me.”

With Fr Boulos Mikhael’s help, he moved to a quiet place, where he made a confession and Fr Mikhael counselled him.

This was one of many encounters during this year’s eight-week-long Great Mission in the Squares, which is held by the Neocatechumenal Way annually in cities around the world.

“Every year we go into public squares to announce the Gospel, worldwide,” said Dino Furgione, who is responsible for the Neocatechumenal Way in Southern Africa. “It started six years ago in Rome following the desire of Pope Francis.”

Italian Anna Lala, with her husband and two youngest daughters, is in mission based in Cape Town and said the busy taxi interchange at Stellenbosch was the “square” of choice.

“We sang, we danced and we announced the Gospel. We also did morning prayers with the seminarians and priests who always accompany us,” she said.

Mrs Lala said it was by the strength of the Holy Spirit she received at Easter that she was able to get up and go to the mission the Neocatechumenal Way holds every Saturday morning.

“It is always difficult to go, to start, because I’m thinking of all the things I want to do on a Saturday, but the Holy Spirit led us,” she said.

She said the experience also gave the missionaries a chance to interact and speak to people personally.

This was also Juan’s experience in Witbank, even though during the first few weeks, no one approached them in the square.

“Nobody approached us, nor stopped to listen,” he said. “But at the penitential service more than ten people stopped, listened and made a confession.”

Among these were homeless people and drug addicts, he said, as well a man who was dying but reluctant to approach to priests.

“When Fr Boulos was almost finished, a man walked in front of me; and I saw in his eyes the need for me to approach him,” Juan said. “So I went and discovered that he was literally dying, due to a lack of his HIV-medication.

“I asked him; ‘Do you want God to forgive all your sins and embrace your soul in heaven?’ He said, ‘Yes sir. How can I do that? How can I come to the light? How? Where?’”

“I replied: ‘Confess your sins, denounce yourself before the Lord with repentance so that when you die and sit in his presence, you will be cleansed and under the light.’”

The man then asked for a priest to help him confess.

Juan explained that this example showed why it was important to take the Gospel to people by meeting them where they are.

“Where and how does a man know, can a man know God’s love? In a house? No, many people are homeless. In a job? No, many have no job. In a family? In a bank account?,” he asked.

“No! Only in the forgiveness of your sins,” Juan said.

“Whether you are a prostitute, have killed a man, or broken into somebody else’s house, there is the greatest manifestation of love — God loves you as you are.”