Ursula Chikane: What My Faith Means to Me 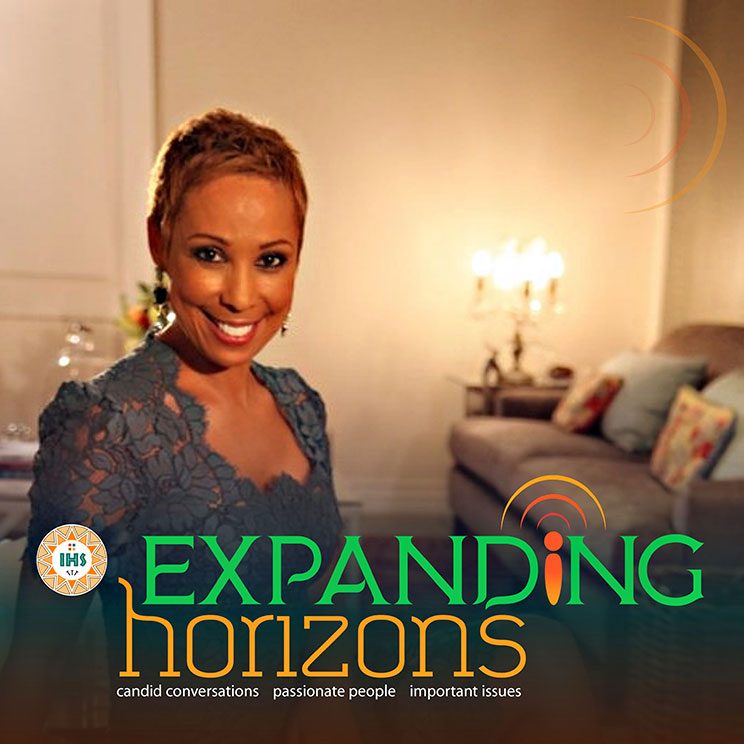 TV and radio personality Ursula Chikane (née Stapelfeldt) is pictured on the cover for the “Expanding Horizons” podcast of the Jesuit Institute. In her interview with Ricardo da Silva she talks about her way back to the Catholic Church and what the faith means to her.

Since the 1990s, Ursula Chikane (née Stapelfeldt) has been as fixture on the South African broadcasting scene: on TV as a presenter on the SABC lifestyle programme Top Billing and MTN Gladiators, and on radio as Brown Sugar on 5FM and currently on Johannesburg’s Power FM.

In this interview, edited from a podcast produced for the Jesuit Institute’s “Expanding Horizons” series, the Johannesburg-born Catholic speaks frankly about her faith and the Church, her regrets about Top Billing, and the accident that changed her life.

I was born a cradle Catholic. I went to Bosmont Secondary Primary in Grades 1 and 2, and from then onwards to St Catherine’s Convent [in Germiston].

Growing up I had mostly guys as friends, and so I grew up believing that I had no limits.

When we had to go to Mass and wear dresses, I did not like it one bit because they were just so inconvenient. Afterwards we would go home and I wouldn’t be able to run and play in the streets with my guy friends because I had this silly dress on. So I couldn’t wait to get home and change out of it.

That tomboy nature sort of stuck with me, even though after joining programmes like Top Billing I learnt how to strut instead of walk — but I pretty much am still the tomboy.

How did the tomboy get on Top Billing?

The way I landed up on Top Billing was via my work in sports broadcasting [on SABC’s TopSport]. I was covering a horse race in Cape Town and the producers of Top Billing saw me and they enjoyed how much of a “lady-like tomboy” I was—and that stayed.

When I joined Top Billing they put me in a little box — the “tomboy in heels” — so I would do the skydiving, the mountain climbing, the river rafting…anything that needed a “fabulously fearless female”.

Later they allowed me to become “the lady” and learn to master the heels properly.

The lifestyle that is portrayed on Top Billing is unattainable for the great majority of South Africans across the colour divide, isn’t it?

When you look at the sheer glitz and glamour… When I was much younger, I honestly celebrated the show as an aspirational vehicle to motivate people to work towards a goal and achieve it.

But then, somewhere along the line, this crass materialism crept in. I don’t know whether it was intentional or not, but it really was just celebrating how much you can get, as fast as you can get it.

And then people were taking huge loans, getting themselves into horrible debt so they could have a Top Billing Wedding. Then not long after they’ve had their Top Billing Wedding, they’re saddled with this debt and all the stress that comes with it — and nobody talks about the Top Billing Divorce.

But what I’m left with is the residual effects. I just feel so bad because I do think after all these years of looking back, of reflecting, of seeing the state of some of the people in our country and what the Top Billing lifestyle means to them — I did play a huge role in building that brand, and I do feel badly.

I always will be incredibly grateful for the platform that Top Billing presented me with and the experiences that I was afforded.

So, on the one hand I’m eternally grateful, and on the other hand I also carry the weight of responsibility for what I have contributed to what some sections of society have become today.

In this age of social media, many young people seem to think that the broadcasting game is an easy one, but it’s a craft, isn’t it?

[Laughs] It is a craft and you do need to continue working on it. Yes, God blesses people with certain talents, and there are naturally-born broadcasters — but before you can get in front of the microphone you need to know about mic techniques.

You also need to realise that there are people who’ve been there before you. When a seasoned broadcaster says, “Try not to do X, Y and Z”, it’s not because they want to pull you down; it’s because they want you to experience the kind of longevity that they themselves have been blessed with.

When the cameraman says, “Drop your chin”, and when the sound engineers says, “Don’t overproject”, they’re doing it for a reason. If they didn’t do that, you might not be called back to present that show that you think God blessed you with.

You cannot microwave success. In the short-term, maybe it’s going to work for you — but then somebody else is going to come along and turn your microwave off and kick you out of your spot.

Filming Top Billing you had a freak accident…

Ooh, it was freak accident on steroids! It was the day after my 39th birthday, and we were shooting at a home in Woodmead.

Before we started shooting the links, somebody — I think it was the soundman — said that someone was going to fall badly on these highly-polished floors.

As I was getting into position, I did like a little hop and a skip, and next thing my foot caught a mat. I slipped and then flipped in mid-air and landed on my face.

I lost four teeth in front and the one tooth was lodged in my top lip. I still have the scars from the stitches inside my lip. My bottom teeth were also impacted.

From interviews with you I’ve heard, I’m presuming this was a spiritual moment.

It must have been, because after that my life took a completely different direction. It was an earth-shattering realisation for me: my smile was taken from me, my ability to communicate was taken from me for months.

I couldn’t do radio work or MCing work — and at that stage of my career I was in huge demand to do gala dinners and conferences and all sorts of things.

The journey to fix my face and my smile lasted over three years. It’s not my original smile, my face has change shape quite considerably, but I think I look close to my original self.

I’ll never have my original smile back, which is sad in a way because I liked that smile, but I do like the one that I have now.

You don’t understand the impact of not being able to smile openly and widely until your smile is taken from you. We vastly underrate the impact of a warm, genuine smile on ourselves and on the people who are witnessing that smile.

Let’s talk about your faith…

I grew up in a traditionally Catholic family. We are faith and cultural Catholics.

Part of the reason why I really feel fortunate to have been born into Catholicism is that we’ve lived the culture of the faith all our lives. I understand what it is to be part of the Catholic family.

The investments you put into your faith as a young person really start paying off later on, when God takes you through all these really powerful conversion moments.

After matric I left the Church. My route back into the faith was via a charismatic church. I was at Rhema one day and Pastor Ray McCauley was having a good old go at Our Lady. Something in my spirit just said: “NO!”.

The next Thursday I went to St Charles in Victory Park. As I walked in, there was the guestbook. I turned the page and it just said: “Welcome home”.

For a lot of people that would not be as powerful as it was for me; knowing the journey I’d just been on, looking for the truth. I fell on my knees and that was it: straight back into Catholicism.

If I didn’t have my Catholic faith, I don’t know where I would be in this world. I call on the saints regularly. I do the “Flying Novena” [of Mother Teresa] regularly. Our Lady’s working overtime for me all the time.

My dad recently had a very bad fall and landed up in hospital. I had found out about St Charbel Makhlouf and I had the holy oils brought in from Rome to be administered to Dad. I believe in miracles because I’ve seen them unfold in front of my eyes

We first met at Holy Trinity in Braamfontein at the 6pm Mass. You’d go there after your radio show faithfully.

I’d be able to sneak in just after Father got into the church.

One of the things that you grow to understand is that you do have your Sunday obligation. That’s one of the things I really didn’t get before I got it. So I appreciated that I could go to Mass after having come from my radio show.

I’ve had a lot of internal turmoil, and I thank God for allowing me to leave the Church in order to discover a fullness of the truth.

I learnt so much about my faith. I started researching. This is where my love for the saints came about. There’s a saint for virtually everything. Poor St Anthony of Padua, he always works overtime.

St Francis of Assisi. I was born on his feast day [October 4]. I’ve always had a soft spot for him.

There’s St Thérèse of Lisieux; I just couldn’t get through without her. St Charbel Makhlouf now as well; he is a go-to. St Joseph… oh, he’s taught me so much. St Pope John Paul II, of course. St Mother Teresa…

Our Church is in a very difficult time, especially with the scandal of sexual abuse. We can’t simply say, “The Church is under attack, it’s the devil”. How do you, as a lay Catholic, continue to live faithfully in Catholicism?

At the end of the day, I am trusting Jesus himself. If I am getting Communion from a paedophile, I am trusting that this sacrament is in that Communion. I can’t leave the Church that Jesus started.

Despite the greatest efforts of bad Catholics, bad popes, bad priests and nuns even, bad lay people, despite patriarchy, despite infighting at the Vatican, despite even myself — the Church still stands.

Our faith through the ages has been built to support and cushion. I’m grateful that I’m loved and cared for by a living God who keeps the giving me despite myself.

What do we need to keep it going?

I think the Church needs the People of God to keep praying for the benefit of the Church. We need to catechise our young fully and properly.

We can keep reminding ourselves that our faith is also a faith of accountability, where not everything goes. We do live in a society of this instant gratification. Sometimes, with charity, we’ve got to call things out and say a thing as it is.

Hear the full interview at www.jesuitinstitute.org.za/expanding-horizons/

Catholics on the Army in the Townships

Catholic leaders in Cape Town townships are hopeful that the deployment of the army in their communities will achieve the...