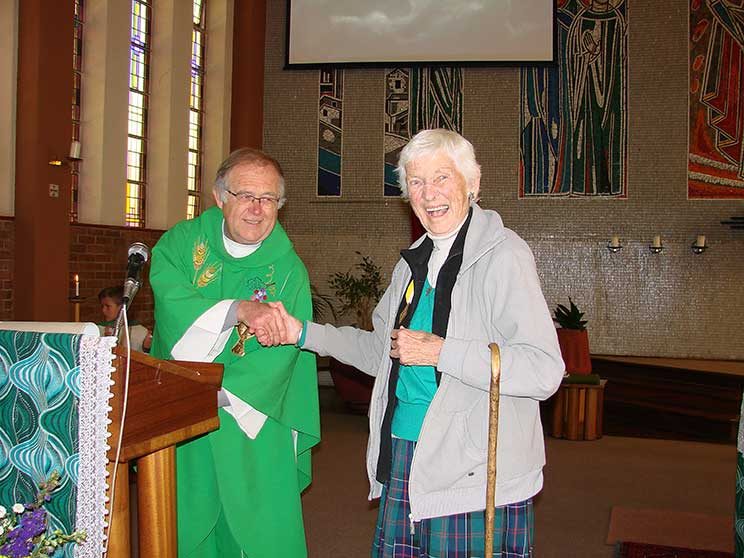 By Rodney Moffett – Educator Dr Rosemary Orpen of Bethlehem, Free State, died suddenly on July 24 at the age of 86.

Southern Cross readers will be familiar with the colourful photos of the Nativity Plays of Leratong Pre-Primary School which she submitted  annually for many years.

Dr Orpen was born an only child on September 6, 1932 in then-Rhodesia while her parents were there temporarily. When she was a year old when the family returned to Cape Town where she grew up, later graduating from the University of Cape Town.

One year, while travelling on a holiday to Durban, the family stopped at Matjesvlei, Bethlehem. On the spur of the moment, Rosemary penned a letter to the principal of Bethlehem School asking for a job. This resulted in her being given a post at Truida Kestell Primary School in Bethlehem, teaching Standards 4 & 5.

Rosemary later recalled that she managed to learn Afrikaans in three months.

For her, teaching was more than a job: it was a life-long vocation.

She was at Truida Kestell for two years, and then held various teaching posts in Kroonstad, Cape Town and Vanderbyl Park, as well as in England and Ireland.

Her English and Irish experience gave her the necessary background for her diploma in education with a thesis comparing the primary education systems of the Britain, Ireland and South Africa.

On her return to South Africa, Rosemary was appointed principal of the Modderpoort Primary School in the eastern Free State. When she started in 1972, the school was on the point of being closed, as there were only eight pupils; when she retired in 1996 the enrolment was 171.

Upon reaching retirement age, she returned to Bethlehem and asked Fr George Wagner to suggest somewhere where she could still be of use. He recommended that she join the teaching staff at Glen Ash Secondary School, and for the next 12 years, without any remuneration, she taught English to various classes, as well as being involved in cultural activities.

When the principal of Glen Ash retired in 2008, Dr Orpen also retired, and Bishop Hubert Bucher, then of Bethlehem, asked her if she wouldn’t help out at the Catholic pre-primary school, Leratong, in Bohlokong.

Again without any payment, and at the age of 75, she taught Grade R at Leratong for nine years.

Here she continued with the Christmas plays, which, as noted, were documented in photographs every year in The Southern Cross.

While at Leratong, she hurt herself in a fall while playing with the kids. This did not deter her from going every day to the school. Her injury did, however, force her later to make use of a walker, which she called ”my 4×4”.

After Leratong, Dr Orpen spent two years helping out part-time at Tshepang Educational Centre in Bethlehem; and on three days a week, she helped two young people who run a crèche from a shack in the township.

More recently, she had been helping the foreign mentors at the drug-rehabilitation centre, Fazenda la Esperança, with their English.

Dr Orpen led a full life as a practising Catholic, rarely missing Mass, weekdays and Sundays. If her place on Sunday was empty, one knew she was chauffeuring Fr Wagner  to another Mass in the town.

Another chauffeuring duty she took upon herself, at the age of 86, was to fetch Fr Menyatso from hospital after his three dialysis sessions a week.

For the past six years, she was an active participant in a small group of parishioners who get together every Tuesday for a study of the scriptures and allied topics.

The day before she died, Ms Orpen led a discussion on Cardinal John Henry Newman and his view of the laity.

Dr Orpen’s extraordinary way of living out her Christian faith did not go unnoticed, and in September 2015, Pope Francis awarded her the Bene merenti medal—she was only the second recipient in the diocese of Bethlehem.

They say no one is irreplaceable, but Dr Rosemary Orpen must come very close to being so.