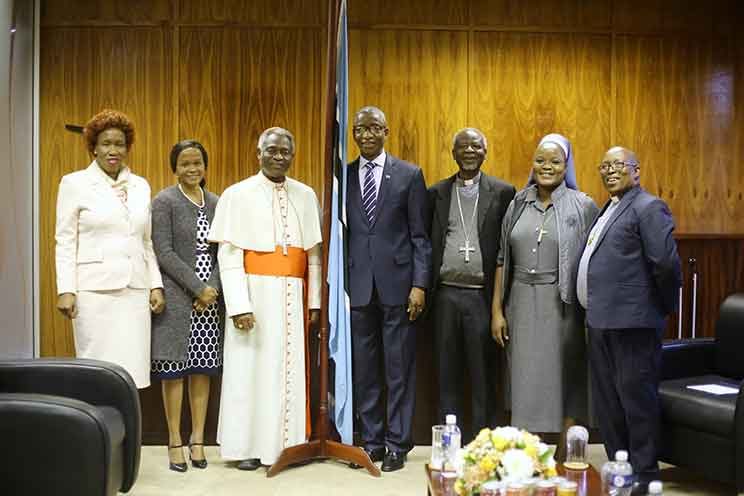 By Sr Phatsimo Ramokgwebana SC – A leading cardinal from the Vatican conducted a spiritual revival conference in the diocese of Gaborone, Botswana.

Cardinal Peter Appiah Turkson, the Ghanaian prefect of the Dicastery for Promoting Integral Human Development, facilitated a two-day national conference of Catholic Charismatic Renewal at St Joseph’s College. The theme of the conference was “Worship God in spirit and in truth”, with the strapline “Arise Botswana and worship God.”

Cardinal Turkson also met with Bishop Frank Nabuasah — a fellow Ghanian who will be installed as bishop of Gaborone on August 17 — as well as with priests, religious and politicians.

In his keynote speech, the cardinal said the aim of the conference was to rediscover faith in the Lord, maintain our relationship with him through prayer, and especially to worship in the spirit and in truth.

“To worship the Lord in the spirit and in truth: this is what Jesus requires for somebody like you and I,” he said.

Meeting with priests, Cardinal Turkson spoke about the vocation to the priesthood. Reflecting on the story of Moses and the burning bush, he said: “A priest as a leader should be curious, and this curiosity should lead him to a personal encounter with the Lord.”

“In your own vocation there should be a thirst for growth,” he said. This, Cardinal Turkson noted, can be done only through an intimate relationship with God. Constant discernment is also necessary for one’s vocation, he said.

The cardinal encouraged women religious not to allow experiences of failure determine their way of life. “These are just there to help you grow; kneeling by the tabernacle and pouring to the Lord your ultimate desire for him should be your source of strength and consolation in all your troubles.”

Cardinal Turkson also took part in a prayer walk from Christ the King cathedral to the government enclave to pray for peace and for the leaders of Botswana, with this year’s general elections in mind.

Although the country is known for its prevailing tranquillity, these are uncertain days, Bishop Nabuasah said as he called on the faithful to pray “that God’s power of the Holy Spirit may touch our leaders and unite them so that our country may continue to move forward”.

In a meeting, Minister of Presidential Affairs, Governance and Public Administration Nonofo Molefhi told Cardinal Turkson about the great impact the Catholic Church has in Botswana, especially in the areas of social development and upliftment of the lives of the poor.

In a discussion with political leaders, the cardinal outlined the principle of Catholic Social Teaching.

The Church’s promotion of the common good, “to which every aspect of social life must be related if it is to attain its fullest meaning, stems from the dignity, unity and equality of all people”, he said.

“The human person cannot find fulfilment in himself, that is, apart from the fact that he exists with others and for others,” said Cardinal Turkson.

He urged those who exercise political authority to see to it that the energies of all citizens are directed towards the common good; and to do so by making use of moral power sustained in freedom.