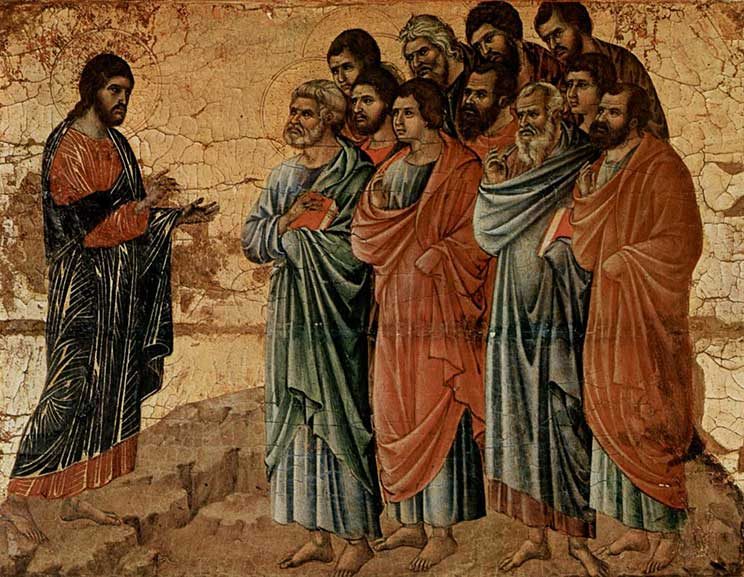 Jesus and his disciples painted by Duccio di Buoninsegna

Who am I; what does it mean for me to be a person, to be a human being?

Many people answer this question in the same way as Scripture, “I am John, a member of the Green family… The son of… The daughter of… The mother of… We take our identity from family. Family has also always been top of the churches’ agenda: The family is a communion of persons “through which each human person is introduced into the ‘human family’ and into the ‘family of God’, which is the Church” (FC 15); no family, no society and no church!

Nothing in this world is more honoured and more sacred in Judaism, or scripture than a person’s family. Family honour, family respect, and family obedience; this is what defined a person in ancient Israel. God is family, God is our first ancestor. To be disowned by your family was the ultimate curse. To have no family was to become a ‘non-person’.

The family is seen as a beautiful blueprint of God’s sacred plan showing reciprocal love, care, and support. Yet there is another side to this, the darker side where evil, manipulation, and oppression hide behind a mask of sacred custom. For millennia the family has been used as a political tool to build dynasties, to secure resources, to build alliances and secure power. Thus is fulfilled a terrible prophecy 3000 years old as the people reject God and demand a leader:

“Give us a king to lead us,” And the LORD told Samuel: “Listen to all that the people are saying to you; it is not you they have rejected, but they have rejected me as their king. … But warn them solemnly and let them know what the king who will reign over them will claim as his rights. He will take your sons and make them serve with his chariots and horses, and they will run in front of his chariots. Some he will assign to be commanders of thousands and commanders of fifties, and others to plow his ground and reap his harvest, and still, others to make weapons of war and equipment for his chariots. He will take your daughters to be perfumers and cooks and bakers. He will take the best of your land, fields and vineyards and olive groves and give them to his attendants. He will take a tenth of your grain and your vintage and give it to his officials and attendants. Your male and female servants and the best of your cattle[c] and donkeys he will take for his own use. He will take a tenth of your flocks, and you yourselves will become his slaves. 18 When that day comes, you will cry out for relief from the king you have chosen, but the LORD will not answer you in that day.”

Why is Jesus being so provocative, setting aside the theological debate, going right to the root of normal loyalties and accepted morality, making a shocking demonstration that the Kingdom of God is a new and true family? The Kingdom of God, both now and in the future, redefine family and all that family means. It is particularly Jesus choice of the word ‘hate’ that alarms us, for obvious reasons, but in the mind of Semitic people the word ‘hate’ does not carry the obvious idea of ‘actively wishing for destruction or punishment.’ The meaning of the word in Hebrew is translated as to ‘disregard’ or ‘stop paying attention to’ or even ‘have no further dealings with.’ We must perhaps also stand with those first disciples and say, ‘this is a hard saying!’

Loving our enemies and loving our neighbours as ourselves, as impossible as that may seem, appears to be extension of the great Command of Love, yet in today’s gospel we find Jesus admonishing us to hate our closest family, our spouse, and even our own lives, and to say goodbye to all our possessions. We may not like it, we may even find other clever interpretations, but we are ultimately reminded that Jesus himself repudiated and disregarded his own mother and family. Jesus certainly did walk the talk!

It might be tempting for us to deconstruct and spiritualise these words of Jesus so that we can have a more comfortable message and a much ‘tamer’ and domesticated God who stands in our ‘winner’s corner’. What ‘God with us’ is offering cannot however be too easily declined. In the Divine exchange offered we bring back to God everything that we have been given.

This is no prosperity cult. This is no divine right of the chosen elite.

Many people who have had near-death experiences, describe the feeling of first contracting, coming together into a single point, and then rapidly expanding, opening up and becoming bigger, reaching out and touching something that transcends our concept of being, touching the All.

This is a mystical re-enactment of our journey towards union with God. We are born and learn to love in little relationships that grow ever bigger, continuously expanding; from mother to father, from parents to grandparents, from siblings to nieces and nephews, from uncles and aunts to our clan, from our clan to our nation; then on to our union with our spouses in a bigger clan and perhaps also another nation. Always expanding, ever-growing bigger.

Our journey reflects God’s own process of kenosis, emptying of the self totally for another. And so one by one we are stripped of these relationships; grandparents die, our parents die, we say goodbye to our aunts and uncles, and then even siblings must part before we part from our spouse. Then the final door that we must pass through ourselves, saying goodbye and leaving behind everything that we have ever clung to, ever held dear, whether friend or titles or honours, all our gifts and possessions, everything! This is the only doorway which we unite with God and share in that love is limitless, unrestrained and eternal.

As we trace the journey of our seraphic father, Francis of Assisi, we encounter the same intuition that led him to seek a different way of life, the way of kenosis. Francis held this kind of life to be possible for everyone, not just at death’s door, but here and now, God’s kingdom with us, God’s kingdom within us. The Franciscan experience expanded and grew ever wider to encompass all men and woman, all creatures and all creation; all are brothers and sisters. Here we find no hierarchical structure of exploitation, domination, or oppression.

As we delve ever deeper into the Franciscan charism, we see that there is for Francis no longer male or female, no longer Greek or Jew. Francis thereby became capable of transcending those differences that separate and alienate us from each other as we see so beautifully portrayed in his relationship with St Clare. The radical freedom that comes with love is beyond that fear that feeds hostility.

Francis admonished us to that deep respect and friendship that sees deeply into the intrinsic dignity of all God’s creation and every man and woman. Francis also admonished us not to go around the world debating about the meaning of words. Each and every person thinks of their own position, their own belief, being based on ‘right thinking’, which is the very meaning of orthodoxy. There are all too many today will are willing to label those who think differently as a heretic. This leaves no room for respect or calm discussion but belittles the other as irrational, deluded and outside the scope of salvation. Such a position will always lead to conflict and the need to dominate.