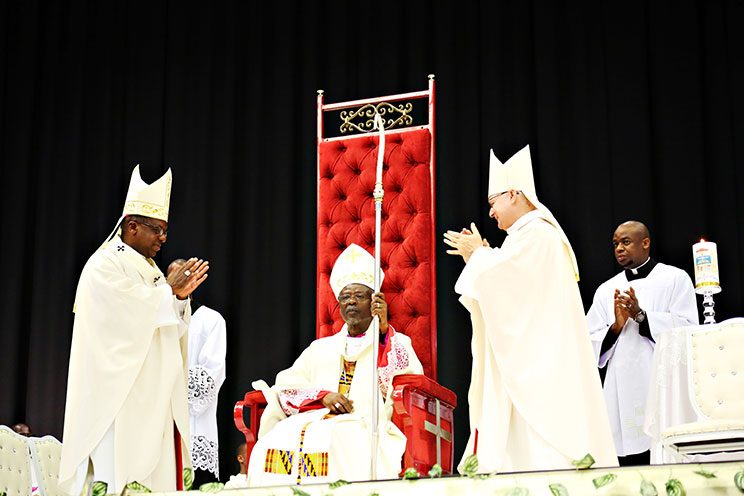 By Sr Phatsimo Ramokgwebana – The installation of Bishop Frank Nubuasah as the fourth bishop of the diocese of Gaborone attracted multitudes of people at the University of Botswana Indoor Sports Arena.

Archbishop Mpako, as metropolitan of the diocese, presided over the installation of Bishop Nubuasah.

The archbishop urged the faithful and the clergy of the diocese of Gaborone to “work well with [their new bishop] through collaborating with him as a man of wisdom with fuller experience”.

Although things have not been easy for the Catholic community of Gaborone in the last few years, there is still hope for them to turn a new page of positivity in the book of history, he said.

After the bishop, a Divine Word Missionary who had headed the diocese of Francistown since 1998, took possession of his new diocese, priests, deacons, religious and members of the diocesan pastoral council pledged their loyalty to him.

President Masisi told the congregation that Bishop Nubuasah “undoubtedly brings a wealth of experience with him which will contribute to the development of the Roman Catholic Church in Botswana and the welfare of Batswana in general”.

He called on the Church to be partners with the state in pursuing the common good of the nation.

The president acknowledged the significant contribution of religious institutions, in particular the Catholic Church, to Botswana’s socio-economic development.

Southern African Catholic Bishops’ Conference president Bishop Sithembele Sipuka of Mthatha noted that “a bishop is not chosen for his own sake; rather he is chosen for the sake of pastoral work; [so] congratulations are more to you than to [Bishop Nubuasah]”.

Archbishop Wells told the congregation: “I have seen Bishop Frank as a true shepherd of his people, having a humble approach in everything he does, his loving care and concern for the poor, for young people for the sick and elderly and above all his compassion and mercy for those in need of being welcomed and embraced by his fatherly love.”

Bishop: Church Must Work To End Violence Against People With Albinism
Share