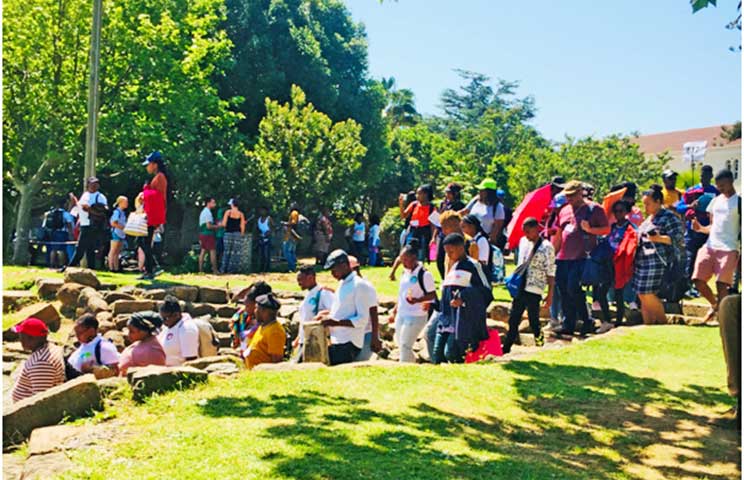 South African and international pilgrims gathered at the campus of St Joseph’s Marist College in Rondebosch for the Taizé celebration.

The ecumenical Taizé Pilgrimage of Trust 2019 brought together thousands of pilgrims, from South Africa and inter-nationally, at a Catholic school in Cape Town. ERIN CARELSE reports from the event.

Amid the youthful exuberance and the Taizé chants, silence and prayer marked the Taizé Pilgrimage of Trust in Cape Town.

The experience of silence for young people — to enter into the silence and to accept the surrender of power, in not controlling anything — is deeply connected with the mystery of the Resurrection, said Br Luc Bourgoin, the Taizé Brother who oversaw the international event.

“Our youth are confronted with violence daily. There is a lot of frustration, pain, brokenness, the violence is everywhere but the answer must start from within. So that is what we see happening in the lives of the young people. We see they deserve to have the experience of silence,” he said.

“We don’t need to force that silence or guidance. It is the silence…we are all poor. In front of God, we can only bend and call for assistance. The young people deserve the gift of silence. It is not complicated or expensive. With simple tools, you can equip people with strength coming from the Word of God,” Br Luc said.

Several thousand young people representing different faiths, cultures and countries took part in the Pilgrimage of Trust on Earth, held on the campus of St Joseph’s Marist College in Rondebosch.

This ecumenical and international meeting saw pilgrims from 19 African countries (including Madagascar and Mauritius), 14 European countries, and the United States come to Cape Town for the first Taizé Pilgrimage of Trust in South Africa since it was held in Johannesburg in 1995.

This was the culmination of 18 months of visits by Brothers of the ecumenical Community of Taizé, in France, to Cape Town communities of Anglicans, Catholics, Lutherans, Methodists and other denominations to encourage youth participation in the Cape Town meeting. 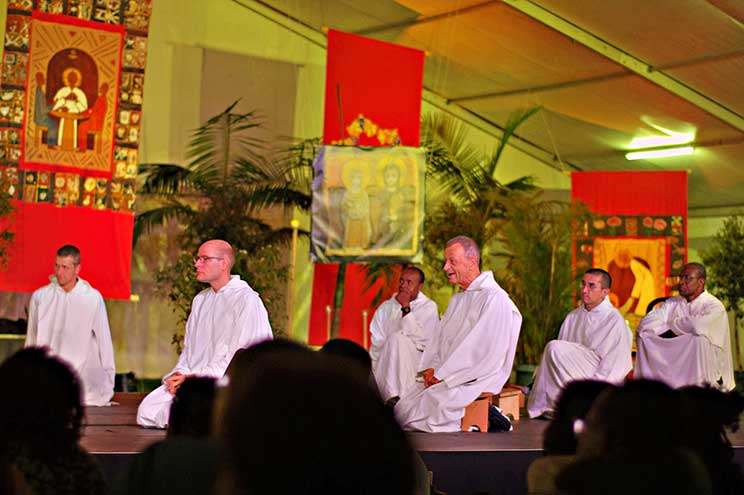 Monks from the Ecumenical Community of Taizé in France pray during the Pilgrimage of Trust 2019. Taizé prior  Br Alois Loser is third from right.

The event was made possible by an invitation from church leaders in Cape Town: Archbishop Stephen Brislin, Anglican Archbishop Thabo Makgoba, Methodist Bishop Ziphozihle Daniel Siwa (who is also the president of the South African Council of Churches), and the Dutch Reformed Church’s Rev Dr Gustav Claassen.

Participants were hosted by more than a thousand families and by parishes of various denominations from across Cape Town. They opened their doors to host two or more young pilgrims each, and the pilgrims expressed their gratitude for the welcome and thoughtfulness of their hosts.

Thabiso from Soweto was very touched at the graciousness of his hosts, an elderly couple who welcomed him. The wife was blind, he said: “She trusted us to come into her house without seeing us.”

One young woman from Kenya said: “The host family really gave of themselves.”

Innocent Zwane from Dundee diocese in KwaZulu-Natal stayed with a host family that runs a B&B. “They welcomed me nicely, and gave me the keys to come and go as I pleased.”

Pilgrims from Botswana were happily surprised at “the freedom of the young people to express themselves”.

A teacher from Mpumalanga said: “It is so nice! There are so many people in one place. It’s amazing.”

A young priest noted: “Even though we are from different backgrounds, we’re able to share. We can approach anyone without fear.”

Ludovic, a pilgrim who arrived from Mauritius, saw some similarities between life in Cape Town and Mauritius. “They are both like a paradise with their lovely beaches. There are different cultures living together,” he said. “In Mauritius, the majority of people are Hindus, Christians, Muslim, Ba’hai, and Jewish,” he noted.

Ludovic said the Word of God especially touched him as it affirms Christianity.

The visiting pilgrims were assisted by a group of marshals and other volunteers, who made sure they were kept safe.

Entering the tents in which the events were held, the sense of celebration of youth and faith was evident. It was an impressive sight to witness a large group of youngsters from various denominations gathering together for one common goal: to live out their Christian faith.

The programme for the days included breakfast with the host family and meeting for an 8:00 morning prayer held in local parish churches. This was followed by visits and meetings with “people of hope” locally. 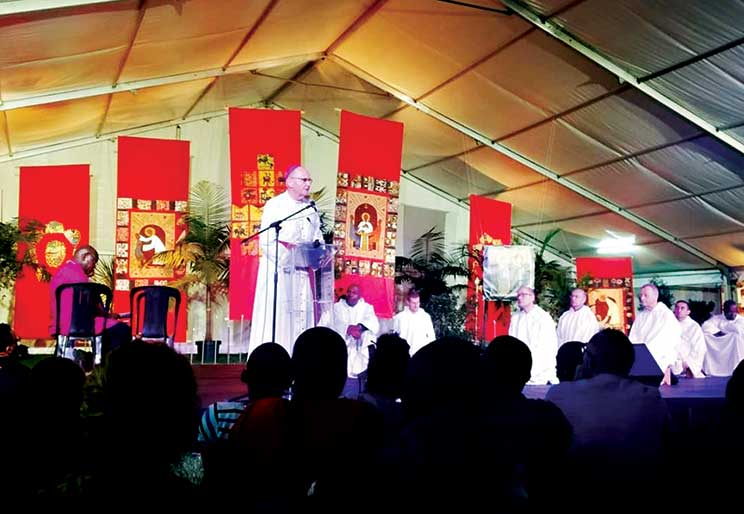 Cape Town Archbishop Stephen Brislin, at a service in the main tent, was joined by leaders of many denominations at the Taizé event.

Around 11:00 pilgrims departed from the host churches to St Joseph’s, where they picked up their meals and then practised songs for the common prayer at 13:00.

At the entrance to the main tent, boards calling for “Silence” were held up, to prepare pilgrims for the prayer session. Once they entered, they were seated in sections; and immediately there was a sense of peacefulness.

Pilgrims started praying together in the characteristic Taizé style of repetitive chants. These echoed across the grounds — thousands of pilgrims in one voice communicating the power of faith and hope.

Afternoons were given to workshops, which explored themes such as “listening to God in the silence of our hearts”, Jesus Christ’s invitation to “come to him and find rest in him”; African cultures celebrating trust and reconciliation at a forum with contributions of song and dance from various countries and regions.

In the evenings, the general public was invited to join prayers in the beautifully decorated main tent.

Archbishop Emeritus Desmond Tutu came to St Joseph’s to give the participants his blessing. In the 1970s, as a young bishop, he had arranged, with the help of Taizé, to bring 144 young people to the Taizé Community in France.

Taking his inspiration from the Book of Revelation, Archbishop Tutu brought “members of every tribe, tongue and people and nation” within South Africa to show the unity of God’s children, despite government policies of separate development.

The now 88-year-old archbishop has been a friend of the Taizé Community for many years.

Br Alois Löser, the current prior of the ecumenical community at Taizé and a German Catholic, in his meditation during the midday prayers said: “We did not come from Taizé to give you a message from somewhere else. It is you who represent the real message: it is embodied by your presence here.

“I would like us all to be able, at the end of our meeting, to ask ourselves, in our prayer and in exchanges with others: What steps can I take, at my level, to build a society where fraternal love and reconciliation are realities?

“Of course, we cannot pretend to have solutions to problems that are beyond our control. But a question like this will keep us alert, and ready to be peacemakers in our daily life,” he said.

“Let us continue this pilgrimage of trust in lives at home, and not forget the encouragement we have received these days. It is the encouragement of Jesus himself, who says to each of us, ‘Do not be afraid, I am here, I am with you always until the end of the world,’” Br Alois said.