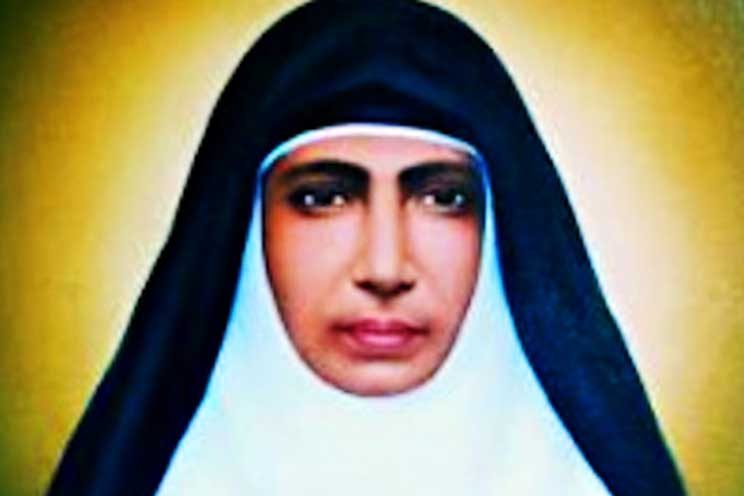 Bl Mariam Thresia, who lived from 1876 to 1926, is said to have had miraculous healing powers, founded a religious congregation, and was a social activist for the upliftment of women. She will be canonised by Pope Francis in the Vatican on October 13.

When Pope Francis canonises a group of saints on October 13, an Indian nun will be among them. ANTO AKKARA explains why Indians have a devotion to Bl Mariam Thresia.

Even Hindus are eagerly looking forward to the canonisation in the Vatican of an Indian nun.

Bl Mariam Thresia Chiramel Mankidiyan, who died in 1926, will be canonised alongside other saints, including England’s Bl John Henry Newman, by Pope Francis on October 13.

The founder of the Holy Family Congregation (CHF) of nuns in southern Kerala state was beatified by Pope John Paul II in 2000.

On Bl Thresia’s feast day on June 8, many Hindus come to her tomb in the village Kuzhikkattussery, about 30km south of the city of Thrissur.

This year hundreds of Hindus were among more than 30000 devotees who thronged the tomb of the nun popularly called Mother Mariam Thresia.

“Mother is not an ordinary Christian for us. She is an icon of love and charity. All of us respect her,” said Advocate PK Mohanan, a Hindu and councillor of Kuzhikkattussery.

“I prayed at her tomb. It is a tradition for many Hindus here to pray at her tomb,” said Mr Mohanan, a communist.

“Mother served all, irrespective of caste or creed. We take pride in her because with her canonisation, the whole world will know about our village,” Mr Mohanan said.

“Mother went out to serve the needy,” the bishop said. She cared for victims of the dreaded smallpox, a fast-spreading airborne disease.

Bishop Kannookadan  noted that she would prevent the burial of people who were still alive and nurture them back to health.

Mother Mariam Thresia was also a social activist ahead of her time.

“At a time when women were not to step out of the homes, Mother fought for women’s liberation, and against superstition,” the bishop said.

“She opened schools for the education of the girls—challenging,” he added.

Born on April 26, 1876, as the third of the five children of Thanda and Thoma of the Chiramel Mankidiyan family at Puthenchira, 2km from Kuzhikkattussery, Thresia was always deeply devout and prayerful.

Thresia resisted her well-off parents’ attempts to marry her off at the age of 10, as per the prevailing tradition. Instead of marriage, she led a life of prayer and austerity, despite belonging to a wealthy farming family, and even slept on gravel on the ground instead of in a bed.

“I cannot sleep comfortably on a bed when Jesus is hanging on the cross on three nails,” Mother Mariam Thresia is heard telling her mother in the hour-long documentary of the story of her life, Blessed Mariam Thresia: The Patroness of Families, brought out by her congregation.

The documentary depicts the founder’s concern that the family ministry should share the compassionate love of Christ and care for the poor, sick and the dying.

The film presents some of her amazing actions, as recorded by Father Joseph Vithayathil, her spiritual director and co-founder of the Holy Family Congregation, who was declared Venerable in 2015.

The name Mariam was added to her given name, Thresia, after she reported an apparition of Blessed Virgin Mary on December 8, 1904—the feast of the Immaculate Conception.

While under the spiritual care of Fr Vithayathil, Thresia  experienced stigmata in 1909, as well as diabolic seizures.

In 1913, Thresia moved to the “House of Solitude”, built in her native Puthenchira village under the direction of the bishop, with three of her friends moving with her.

A year later, Thresia received the canonical permission to launch the congregation named after the Holy Family.

“Mother had miraculous powers and healed many, including the [Hindu] king,” said Sr Udaya Punneliparambil, the superior-general of the congregation, which today  has 1970 members. 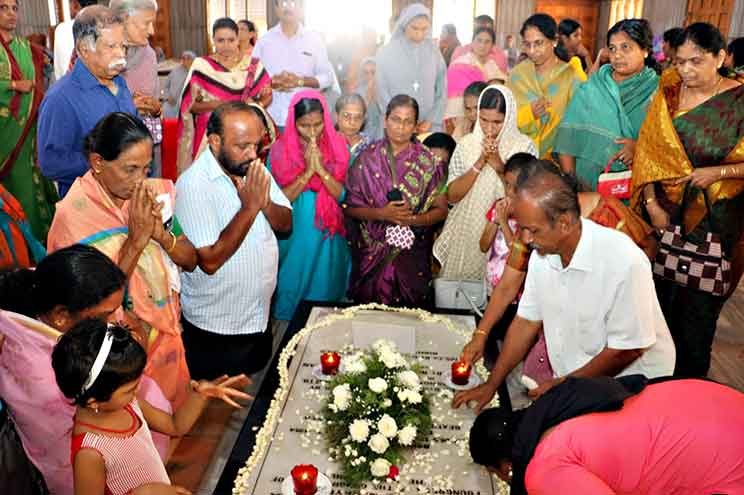 Devotees, including Hindus, come in great numbers to the tomb of Mother Mariam Thresia on her feast on June 8. (Photo: Anko Akkara)

Healing of a king

After a Catholic family donated eight acres of land to launch a convent, Thresia took an adventurous journey to the city of Kochi—50km away—to meet Hindu King Rama Varma in 1918, seeking help to complete the convent building.

When the courtesans refused to let her meet the king because he was ill with a serious abscess, the nun made a potion of plants and asked his mandarins to apply it.

The king was soon healed and sent word to bring the nun back. He ensured that high-quality teak wood was delivered to them from forests  150km away.

A century later, Latha Lipin, a Hindu, became a witness to the miraculous powers of Blessed Mariam Thresia.

“I have been coming to Kuzhikkattussery regularly since 2001 to pray as Mother takes care of my problems,” said Ms Lipin, her face beaming.

A year after her wedding in 2011, Ms Lipin came to the shrine to pray earnestly for a child.

“Soon I was pregnant. Later doctors told me I had medical complications and would have to undergo Caesarean surgery. I came and prayed at the tomb—and had normal delivery,” Ms Lipin recalled as her child and husband stood beside her.

“I have been sharing my testimony with many childless Hindu couples. They have come here to pray and have been blessed with babies,” Ms Lipin said proudly.

Cicily Choondal was choking back tears as she narrated the miraculous healing of her infant grandson Christopher.

It was his healing which was approved by the Vatican as miraculous, clearing the way for Mariam Thresia’s canonisation.

“As soon as Christopher was born [on April 7, 2009], he was put on oxygen in the intensive unit. The doctors told us that my grandson would not survive,” Ms Choondal recalled.

“I was asked to prepare the house for the funeral. I went home in tears.” She then brought a relic of Bl Mariam Thresia from her house and  told hospital staff to touch the baby with it.

“Shortly after, the Hindu doctor came out and declared that as soon as the ‘sacred object’ was put on the infant, his condition has suddenly improved,”Ms Choondal said.

“Now Christopher is healthy like any child and is attending school,” said the grandmother, who had been reciting the novena of Mariam Theresa for years daily after the evening family rosary.

“This is a holy year for us,” said Fr Sebastian Panjikaran of the Puthenchira Forane church.

In a tribute to the new saint, parishioners have been building houses for the poor, he said.