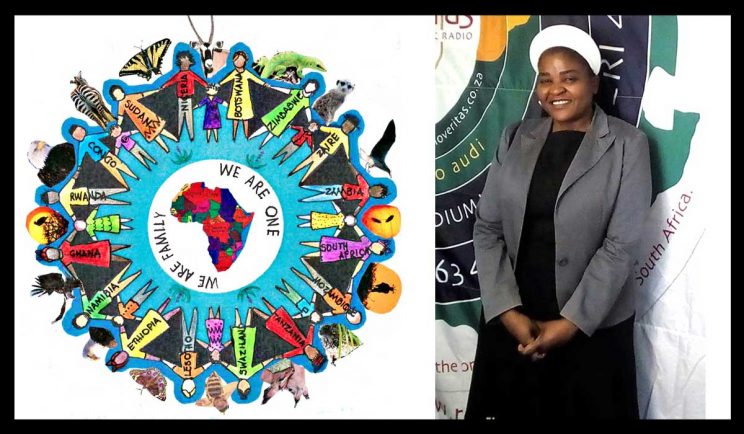 Sr Nkhensani Shibambu of the Constellation 6 group of nuns’ congregations which has produced a mandala  in response to recent xenophobic attacks. (Photo from Sheila Pires)

By Sheila Pires  & Erin Carelse – A group of Southern African nuns from different congregations has released a graphic mandala — a circular spiritual design — in response to the recent violence, disrespect for human life and xenophobic attacks.

“The mandala is a call for us to go back to the centre, which is Christ himself, and give witness to the Gospel of Peace to promote unity, harmony and dignity among all humankind,” Sr Nkhensani Shibambu CSA, moderator-general of the Congregation of the Companions of St Angela, explained.

A statement titled “We are family! We are one!” emphasises that “we are all connected to each other and to all of creation, and we call on everyone to promote dignity and unity in whatever way they can”.

The statement continued: “We realise that much of the violence is the fruit of frustration and anger at the unequal distribution of wealth and the greed of those who steal from the majority, and this too is the violence we deplore.”

To facilitate communication, exchange and mutual support, the nuns are gathered in constellations where, in every continent, they incarnate the aim and mission of the group.

Southern African nuns fall under Constellation 6, congregations whose generalates (or headquarters) are based in Namibia, Botswana, Lesotho, Eswatini or South Africa.

“The true soul of Africa is one of deep respect for life in all its forms. Jesus Christ as the Prince of Peace is the prototype of this value. Our vowed life as religious is a witness to this peace,” said Sr Shibambu.

Speaking to Radio Veritas, she said the recent spate of violence across South Africa has its roots in the legacy of apartheid.

Sr Shibambu noted that the struggle against apartheid included sometimes violent protests. “We’re a very violent society, people bear too much anger within,” she said.

She suggested another Truth and Reconciliation Commission to deal with the trauma and effects of apartheid.