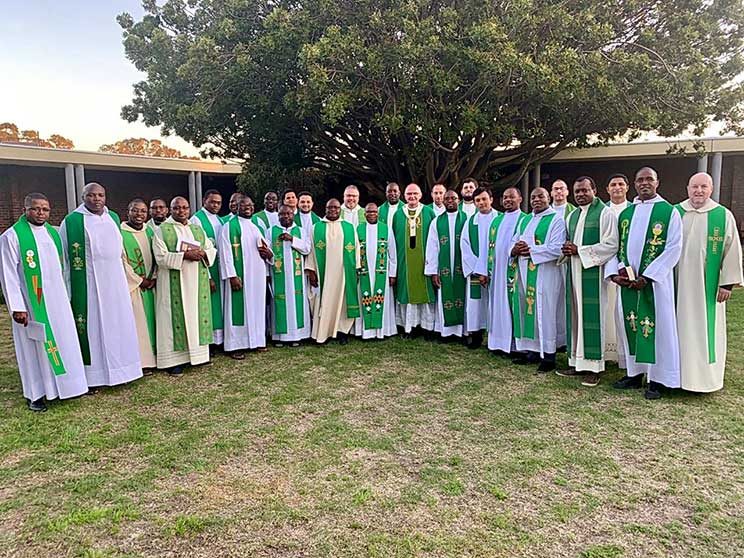 Archbishop Stephen Brislin and priests who have been in ministry for five years or less.

Priestly formation never stops. That’s why “baby priests” — those, like myself, who were recently ordained — have to attend the Annual Gathering of Recently Ordained Priests (Agrop).

It is requirement for all priests in the first five years of their ordination. For those of us in the Cape Metropolitan Region (that is, most dioceses in the Western and Eastern Cape), the gathering took place in Cape Town this month.

Since it was my first encounter, it would seem that “kindergarten” would be exciting. But Agrop is no child’s play!

As Pope John Paul II stated in his 1992 document on the formation of priests, I Will Give You Shepherds: “Ongoing formation is a duty, in the first instance, for young priests…to grasp and incarnate the unique wealth of God’s gift which is the priesthood and to express their capabilities and ministerial attitude” (76).

This gathering fosters communion between the new priests and, in turn, with the priests and bishops with whom they serve. That is why the presence of Archbishop Stephen Brislin of Cape Town and Bishop Sylvester David, his auxiliary, added gravity to the meetings.

On each day a different priest led the discussions on various topics aimed at assisting us in our personal lives and in our ministry as priests. These ranged from priestly spirituality to the very nitty-gritty of parish life.

For those of us who passed through the corridors of St Francis Xavier Orientation Seminary in Crawford, Agrop brought a sense of nostalgia with a visit to the current staff and students.

We remarked that the Holy Father would be proud that this environmentally-conscious and (mostly) Jesuit-run seminary is “Laudato Si’ in action”, with an effective water- and energy-saving system in place.

We also experienced a uniquely “welcome to Cape Town” atmosphere when we visited various parishes for the Sunday celebration of Holy Mass. This was most appropriate during Heritage Month but marred by the xenophobic attacks and the violence against women and children in South Africa at the time. It then became an opportunity to pray and reflect together on what kinds of priests we want to be.

The gathering fittingly ended with a two-day retreat based on the apostolic exhortation of Pope Francis, Gaudete et Exsultate, on the Universal Call to Holiness, with a special emphasis on the virtue of humility, learned through prayer, imitating the Lord Jesus who “wants us to be saints and not to settle for a bland and mediocre existence”.

Perhaps all Catholics could think about this during the Extraordinary October Month of Mission, with its theme, “Baptised and Sent”.

This motto has a meaning for our ongoing journey as Christians in the world today, for, as Pope Francis says in Gaudete et Exsultate, “we are all called to be holy by living our lives with love and by bearing witness in everything we do, wherever we find ourselves”.