What Mission Month is About 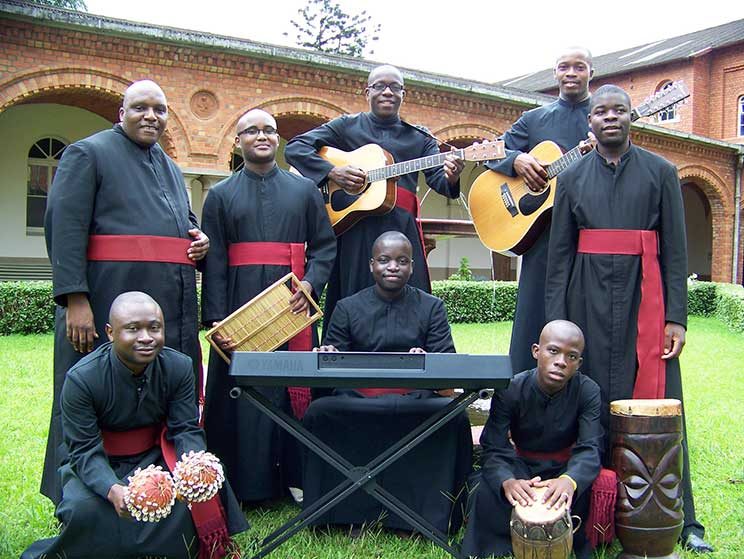 Musicians of Mariannhill monastery in KwaZulu-Natal, which was founded by Abbott Franz Pfanner and his fellow missionaries.

Pope Francis has declared October 2019 an Extraordinary Mission Month. Fr Dumisani Vilakati explains why and what that means to us.

The third Sunday in October is traditionally dedicated to the Church’s missionary endeavours. And October is often seen as “Mission Month”. Two years ago Pope Francis declared October 2019 an Extraordinary Missionary Month to heighten that focus.

Why this year? The Pope chose October 2019 in celebration of the 100th anniversary of Pope Benedict XV’s apostolic letter Maximum Illud. That document gave a great impetus to the Church’s missionary activity in the period following the First World War.

Pope Francis wishes that the month of October 2019 be not only a celebration of Maximum Illud but also an encouragement to pay attention to the Missio ad Gentes (Latin for “To the Nations”), and indeed in every sphere of Church life.

Even though Benedict XV’s letter was written a hundred years ago, its message is still relevant for the Church today, and, indeed, will be for some time to come.

Benedict XV grounded the mission of the Church in Jesus Christ who commanded his disciples to go and preach the Gospel to every creature. As such, this is a divine mission.

This mission is meant to last forever as the apostles took it so seriously that they also handed it over to their successors.

Such was the dedication of the apostles and their successors that, in spite of persecutions, the Gospel reached many lands in Europe, Africa, the Americas, Asia, and finally Australia and the Islands of the world.

In fact, through the efforts of the missionaries, many people have reached sanctity. Some of these attained sanctity by martyrdom and others by showing a good example of Christian piety. Indeed, a number of missionaries can be counted among the saints as well.

In spite of all the work done over the centuries and the manifest zeal for souls among missionaries, many people still remain outside the faith.

At the time of writing his apostolic letter, Pope Benedict XV indicated that about a billion people had not been reached by the faith. This explains the reasoning behind the writing of the letter: It seeks to encourage bishops and priests to a renewed commitment in the task of evangelisation.

In encouraging a renewed commitment to missionary work, Maximum Illud presents five important matters as it focuses on the bishops who are already involved in the missions.

Secondly, Maximum Illud places emphasis on the fact that the mission needs to be extended to all people in the territory where the missionaries find themselves.

A century ago, this allowed for the creation of new vicariates and prefectures, most of which are now dioceses.

Thirdly, in a sense related to the above, Maximum Illud seeks the shunning of any form of exclusivity in the mission territories. Bishops must be open to more religious congregations, nationalities and women.

Fourthly, Maximum Illud underlines the importance of collaborating with neighbouring ecclesiastical territories in order to deal effectively with common problems and challenges. An area of such collaboration is specifically mentioned as the formation of the indigenous clergy.

The fifth point that is emphasised concerns the proper formation of indigenous clergy with the addition that this be done in sufficient numbers.

Their formation should be on par with the clergy in the countries where Christianity enjoys a more ancient tradition. Anything less would give rise to an inferior clergy unable to lead the Church properly in the future.

As such, the importance of seminaries receives special mention in Maximum Illud, with the clear indication that these be established in territories where they did not yet exist.

The role of missionaries

After speaking directly to the bishops on the aforementioned points, Benedict XV turns to the missionaries.

It is vital that a missionary gives a good example to the people in the missionary territory. This is so that the local people can recognise that the religion is indeed noble and is for all people.

Mentioned specifically is the need to have some knowledge of the language and culture of the people the missionary is sent to.

This is so that he may have the ability to communicate with local leaders and indeed the general population.

Such qualities are viewed in Maximum Illud as important in attracting local people to the Christian way of doing things.

The role of women

Having addressed the missionaries directly, Maximum Illud moves on to speak about the involvement of women in mission territories.

It notes that they have, since the beginning of Christianity, been involved in the spread of Christianity. Consecrated virgins are singled out as having excelled in educating the young and taking care of the sick and the poor.

To this end their involvement in the missions is encouraged and in fact required.

Lastly, Maximum Illud turns to those who have already been baptised, noting in particular their duty to assist in mission. In this way they will be giving testimony and thanks to God for having received the gift of faith.

Benedict XV notes three ways in which the baptised may participate fruitfully in such a noble task.

Firstly, they have to offer prayers so that the work of the missionaries may not be rendered sterile.

Religious congregations and other institutes were exhorted to send more personnel to the missions.

The message of Pope Benedict XV, proclaimed a hundred years ago in Maximum Illud, is still relevant for the Church today.

Of course, it is also a document of its time, especially in seeing evangelisation as just the work of the clergy and religious. Lay people seem to appear where they have to support the works of the missions with prayer and material resources.

Also, the language which Benedict XV uses in some sections, especially in referring to those not yet admitted into the Church, can seem demeaning and in a certain sense representative of a colonial mindset.

The lack of a clear mention of the laity in evangelisation and a more respectable language for those who are not yet Christians would be the great project of the Second Vatican Council in the 1960s.

The obvious deficiencies in the document do not detract from its perennial value, however.

Whereas Pope Benedict XV spoke of one billion people who had not yet reached the faith in 1919, we now speak of billions. The commandment of Christ to go and make disciples of every nation has not expired. The need remains on the importance of working together so that this noble task may be attended to accordingly.

Moreover, the lack of personnel and material resources still hampers the work of evangelisation even today.

Relevance for us today

In the southern African region, some churches have more human and/or material resources while others remain without.

As such, cooperation and the sharing of resources among churches remain important areas to be further explored.

Moreover, there is still a need to attend to the formation of indigenous clergy. Such formation should be on a par with their counterparts in other parts of the world as well as being in sufficient numbers. This is especially true of diocesan clergy who, at times, don’t see themselves as missionaries, so that they may be ready for the Missio ad Gentes.

Maximum Illud can serve as an impulse for a more renewed missionary engagement and commitment.

Its main points on the cooperation of Particular Churches, formation of the clergy, openness to the involvement of religious congregations in spreading the Gospel, bringing in other nationalities for this noble and divine task, and the inclusion of women are still relevant.

As the baptised people of God, we should never stop praying, providing personnel as well as material resources for the missionary activity of the Church so that this noble task may be attended to accordingly.

Fr Dumisani Vilakati heads the pastoral department of the Inter-Regional Meeting of the Bishops of Southern Africa (Imbisa).

WE Can Be the Change We Want to See