Women Religious Should have Vote at Synod, Theologian says 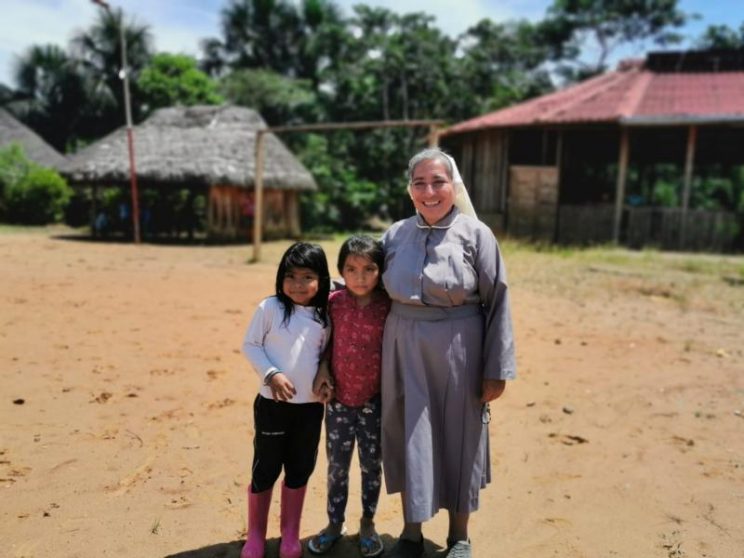 Sister Rosa Elena Pico, a member of the Missionaries of Mary Co-Redemptrix, poses for a photo with children from the indigenous community of Sarayaku, Ecuador. While the Catholic Church has made strides to include the voice of women, especially in the Synod of Bishops for the Amazon, women should be included among synod voting members and in church leadership positions, a German theologian said .(CNS photo/Junno Arocho Esteves)

By Junno Arocho Esteves – While the Catholic Church has made strides to include the voice of women, especially in the Synod of Bishops for the Amazon, women should be included among synod voting members and in church leadership positions, a German theologian said.

Medical Mission Sister Birgit Weiler, a member of the Peruvian bishops’ pastoral ministry for the care of creation, told journalists at a Vatican news briefing that such changes would allow the church to become “a community of sisters and brothers, sharing faith, discerning together.”

“When you have participated fully in the whole process of sharing faith, of discerning together,” then the vote is a natural expression of wanting to participate fully in the decision-making phase of the synod, she said.

“There is a wide field (of leadership positions) where you do not need to be ordained,” she said, adding that she hoped, in the future, more women – both lay and religious – “will be invited to assume responsible positions.”

“Of course, as many other religious women, we desire that we come to the point that our superiors general can have a vote” just as their male counterparts do, she said.

During the briefing, Sister Weiler told journalists that she, along with two sisters participating in her small-group discussions at the synod, experienced “a very open atmosphere” and feel “accepted as part of the group.”

The German theologian also said she is grateful to Pope Francis and the steps he has taken to include women’s voices throughout the synod process.

This, she said, “is already a significant step forward, and I want to honour it.”

Women, both lay and religious, have noted that the atmosphere allows for “more critical questions” to be asked “respectfully, but open on the table.”

Sister Weiler said that among the bishops and cardinals participating at the synod, there are a good number “who really understand us as women, who share our concern” and who know that there are things that cause the women pain; “they understand why and want things to change.”

“There isn’t a clerical attitude,” she said. “There’s a lot of freedom of speech, and it is a beautiful experience really to discern together.”

Pope Apologises That Statues Were Vandalised, Says They Were Recovered
Share