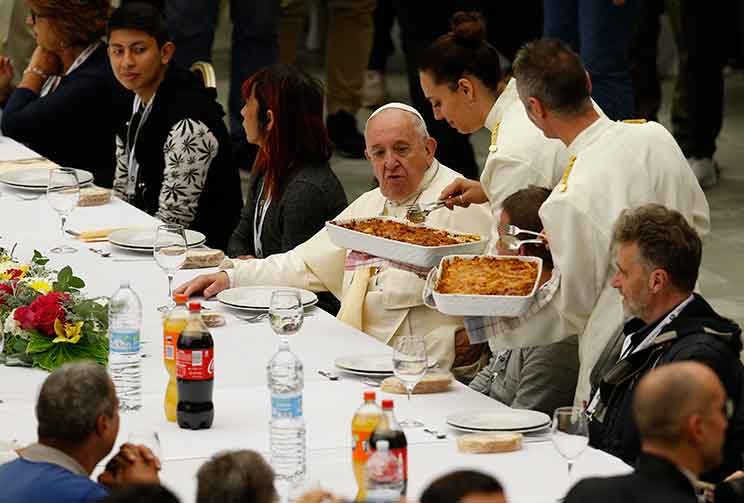 Pope Francis eats lunch with the poor in the Paul VI hall as he marks World Day of the Poor at the Vatican. (CNS photo/Paul Haring)

By Cindy Wooden – The poor are the church’s treasure because they give every Christian a chance to “speak the same language as Jesus, that of love,” Pope Francis said, celebrating Mass for the World Day of the Poor.

“The poor facilitate our access to heaven,” the pope said in his homily. “In fact, they open up the treasure that never ages, that which joins earth and heaven and for which life is truly worth living: love.”

Thousands of poor people and volunteers who assist them joined Pope Francis for the Mass in St. Peter’s Basilica. After the liturgy and the recitation of the Angelus prayer in St. Peter’s Square, Pope Francis hosted a luncheon for 1,500 of them while thousands more throughout the city enjoyed a festive meal at soup kitchens, parish halls and seminaries.

Served by 50 volunteer waiters in white jackets, the pope and his guests in the Vatican audience hall enjoyed a three-course meal of lasagna, chicken in a mushroom cream sauce with potatoes, followed by dessert, fruit and coffee.

To speak Jesus’ language, the pope had said in his homily, one must not speak of oneself or follow one’s own interests but put the needs of others first.

“How many times, even when doing good, the hypocrisy of ‘I’ reigns: I do good, but so people will think I’m good; I help, but to attract the attention of someone important,” Pope Francis said.

Instead, he said, the Gospel encourages charity, not hypocrisy; “giving to someone who cannot pay you back, serving without seeking a reward or something in exchange.”

In order to excel at that, the pope said, each Christian must have at least one friend who is poor.

“The poor are precious in the eyes of God,” he said, because they know they are not self-sufficient and know they need help. “They remind us that that’s how you live the Gospel, like beggars before God.”

“So,” the pope said, “instead of being annoyed when they knock on our doors, we can welcome their cry for help as a call to go out of ourselves, to welcome them with the same loving gaze God has for them.”

“How beautiful it would be if the poor occupied the same place in our hearts that they have in God’s heart,” Pope Francis said.

In the day’s Gospel reading from St. Luke, the crowds ask Jesus when the world will end and how they will know. They want immediate answers, but Jesus tells them to persevere in faith.

Wanting to know or to have everything right now “is not of God,” the pope said. Breathlessly seeking things that will pass takes one’s mind off the things that last; “we follow the clouds that pass and lose sight of the sky.”

Worse, he said, “attracted by the latest ruckus, we no longer find time for God and for our brother or sister living alongside us.”

“This is so true today!” the pope said. “In yearning to run, to conquer everything and do it immediately, those who lag behind annoy us. And they are judged as disposable. How many elderly people, how many unborn babies, how many persons with disabilities and poor people are judged useless. One rushes ahead without worrying that the distances are increasing, that the lust of a few increases the poverty of many.”

The pope’s celebration of the World Day of the Poor concluded a week of special events and services for the homeless, the poor and immigrants in Rome.

The poor served by the city’s Catholic soup kitchens and Vatican charities were invited Nov. 9 to a free concert in the Vatican audience hall featuring Nicola Piovani, the Oscar-winning composer, and the Italian Cinema Orchestra.

From Nov. 10-17 dozens of physicians, nurses and other volunteers staffed a large medical clinic set up in St. Peter’s Square. The clinic offered flu shots, physical exams, routine lab tests and many specialty services often needed by people who live and sleep on the streets, including podiatry, diabetes and cardiology.

As rain beat down on the square Nov. 15, Pope Francis paid a surprise visit to the clinic and spent about an hour visiting with the clients and volunteers.

Afterward, the pope went across the street to inaugurate a new shelter, day center and soup kitchen for the poor in the Palazzo Migliori, a four-story, Vatican-owned building that had housed a community of women religious. When the community moved out, Cardinal Konrad Krajewski, the papal almoner, began renovating it.

The building now can accommodate 50 overnight guests as well as offering a drop-in center for the poor and housing a large commercial kitchen. Meals will be served at the building, but also will be cooked there for distribution to the homeless who live around two Rome train stations.

The Community of Sant’Edigio, a Rome-based lay movement that already runs soup kitchens and a variety of programs for the city’s poor, will manage and staff the shelter.