We Are Called To Care For Creation 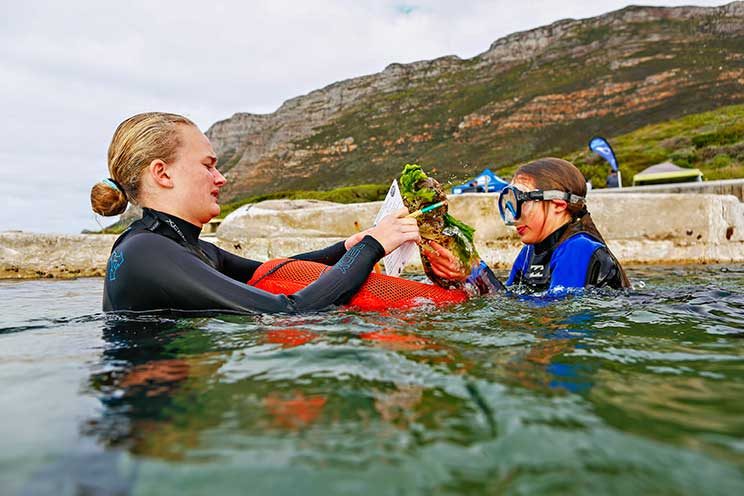 Snorkellers count and log the details of the plastic and other waste retrieved from the sea bed off Miller’s Point, between Simon’s Town and Cape Point in Cape Town. (Photo: Nic Bothma, EPA/CNS)

Pope Francis in his document Laudato Si’ calls us to care for creation. In this article, Helen Gonsalves & Sr Angelika Laub OP put the issues at stake for us in a nutshell.

Either we learn to live in harmony with God, one another and the natural world, or we shall perish.

There are various environmental threats; these include the unjust economic systems caused by inequitable wage structures in our country which bring about extreme poverty, with two-thirds of the people of South Africa living in these conditions.

There is an overconsumption of resources. Industrialised countries comprise 24% of the world yet consume over 75% of the world’s total energy and mineral resources while producing over 90% of the pollution and hazardous waste.

Transnational companies operating in South Africa, and many other countries, contribute to the high levels of pollution and illnesses.

The global environmental threats are well-known.

The protective ozone layer in the upper atmosphere is being destroyed by the production of polystyrene and aerosol propellants. The absence of the ozone layer is contributing to an increase in skin cancer and interferes with sensitive processes in plant and animal life.

This is caused by burning of fossil fuels by, for example, petrol and diesel motors, coal-powered power stations and so on.

Carbon monoxide is a poison and carbon dioxide traps the heat thus produced.  Our forests and grasslands, which used to convert carbon dioxide to life-giving oxygen, are being destroyed by the minute.

Higher temperatures are changing the global climate and cause more violent storms. These in turn contribute to more desert areas.

Ice caps are melting; this releases water which results in rising sea levels, which in turn causes flooding of coastal plains, ports and cities. Islands are already disappearing.

Climate change has caused an increase in heatwaves during which people are collapsing and even dying due to abnormally high temperatures.

Biodiversity is the variety of life forms of the earth. All life is interdependent for its survival, and all life forms have a right to exist.

Deforestation — the cutting down of forests — destroys the plants and animals which live there, causing thousands to become extinct.

Plants and animals are destroyed by pollution, genetic modification (infertile seeds), hunting and slaughter, overconsumption, destruction of their living space, and global warming.

Pollution from human activities, such as factories, causes acid to be released into our air. These acids are caught in rain which causes these poisons to be deposited on all of us.

Our natural resources are being destroyed by the decline in the quality of water availability, caused by droughts, waste and pollution; the production of millions of tonnes of toxic waste which is deposited on land and in the air and water.; radioactive waste from nuclear power stations; toxic waste from old batteries and energy-saving globes and neon lights, and so on.

What can we do?

We are by nature self-centred, acquisitive and greedy people. We must learn to control and discipline this urge. We don’t always need all that we buy and get… It’s a waste.

We have abused God’s mandate to care for the earth. Can we begin to care for our environment?

We must take an interest in the natural environment around us, our homes and our surroundings and everywhere we go.

It begins with the small things: throwing rubbish in the streets as we walk and from cars as we drive around is a lazy, dirty and universal problem. None of us is exempt from changing our behaviour.

We must plant trees wherever we go, and not be so quick to chop them down. Trees sometimes take hundreds of years to grow — and we take ten minutes to destroy them.

We can reduce our consumption of unnecessary things and recycle or share whatever we can.

We can reduce our use of plastic and resist endless production of waste. Some things can be bought by weight instead of pre-packs; would that inconvenience us?

We have to stop poisoning plant and animal “pests” and use nature’s ways to deter them. Poisons do not discriminate between the good and bad; they harm bees and owls which help us tremendously. Poisons on our food make us sick, too!

Do we love our earth? Are we aware of her suffering? Are we ready to change our selfish habits in order to care for her?

Again, the change begins with us. Do we have a personal policy of not killing birds or animals by neglect or for sport? Do we buy or get animals for presents or whims and then discard them when caring for them becomes inconvenient or the fashion that prompted us to get these pets is over?

Do we know the environmental policies of our government, province and municipality?

Do we care enough to encourage them to have better management of our resources and our surroundings?

Our question must be: How can we help to bring justice to our world?

By Cindy Wooden - The saints were flesh-and-blood people whose lives included real struggles and joys, and whose holiness reminds...