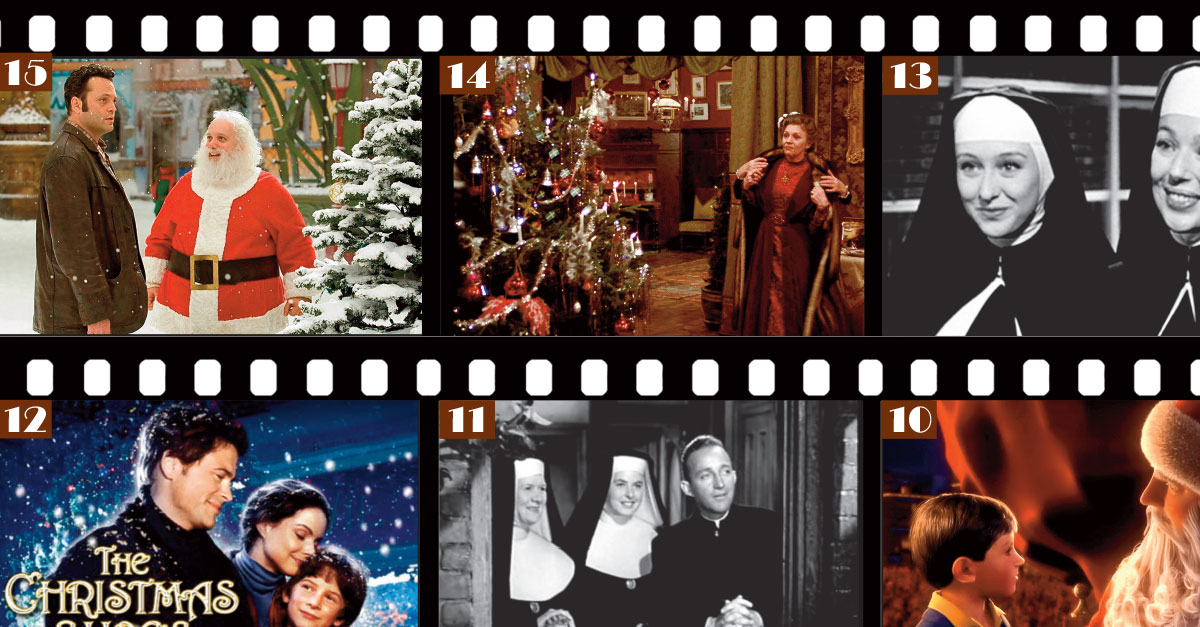 There are many Christmas movies, but how many of them are actually good and edifying? Günther Simmermacher picks 15 seasonal films to see.

For Catholics, finding suitable Christmas movies is a challenge.

Most seasonal movies are Hallmark fare, with all the predictable clichés one may expect (and some might even want) from them.

A fairly recent fashion has been to introduce a cynical edge to seasonal movies, with assorted inebriated Santas wreaking their own brand of comedic mayhem. You may laugh, but you won’t be edified.

Some even regard films as Christmas movies which happen to have bells jingling somewhere. But a jingling bell on its own tells us nothing about Christmas. The 1988 action movie Die Hard may be set on Christmas Eve, but it has very little to do with Christmas.

So, what is a proper Christmas movie? At the very least, it should have some reference to Christmas as a feast of goodwill.

Don’t expect to see much by way of the feast of the Nativity in the movies: Christ rarely is the subject of Christmas…

Still, there are some films that communicate a Christian message: of generosity, of decency, of wonder, of hope, of faith. And sometimes, between the lines, we can see God in Santa Claus. In other words: the movies make you look for spiritual nourishment on your own steam.

Here are 15 movies which convey the right spirit at Christmas.

A couple feature recurrent actors: Henry Travers, as an angel in It’s A Wonderful Life and a miser in The Bells of St Mary’s, both directed by Catholics, Frank Capra and Leo McCarey respectively; and Catholic actress Loretta Young as a nun in Come To The Stable, and as the eponymous lead in The Bishop’s Wife.

What’s the story? Santa gets help from his jealous brother while a wicked business consultant wants to shut the elves’ toy factory.

Christmas hook: Personal redemption and plenty of heartwarming stuff about the importance of family and forgiveness, and ultimately redemption.

What’s the story? A very long experience of a Swedish Christmas in the early 1900s, directed by Ingmar Bergman, who is less gloomy than usual.

Christmas hook: The adults are quite complicated, but the children still have that Christmas wonder. Theirs is directed at the traditions of Christmas; ours should be directed at the birth of the Lord while still having that child-like wonder.

What’s the story? A true story of nuns (Loretta Young and Celeste Holm) who try to build a children’s hospital, against the usual odds.

Christmas hook: The Sisters are inspired by pictures of Nativity scenes and the little town of Bethlehem.

What’s the story? A lost pair of shoes is at the centre of a story involving a boy, his terminally ill mother and heartless father. The one made-for-TV movie to watch.

What’s the story? The most Catholic, if not most Christmassy, of films, as a priest (Bing Crosby) and a nun (Ingrid Berman) try to save a parish school.

Christmas hook: “With holly in your heart, it’s Christmas all year.” Plus, a most delightful Nativity Play.

What’s the story? A boy is taken on a magic train to Santa’s village in the North Pole, and Tom Hanks voices seven characters in this beautifully animated film.

Christmas hook: Well, Santa’s village. Plus, the value of believing in things that can’t be seen defines the idea of having faith.

What’s the story? A bishop prays for help to fund the construction of a cathedral, and an angel comes from heaven to help. David Niven and Cary Grant in one movie? It must be heaven.

Christmas hook: The bishop’s prayer gets answered, but not in the way he envisaged. Bonus: A Christmas sermon.

What’s the story? An unlikely angel (played by Harry Dean Stanton) takes charge of the Christmas spirit amid all kinds of tragic events.

Christmas hook: Faith in the goodness of the world is restored, and the Christmas spirit is alive.

What’s the story? How the world’s most famous Christmas carol was written by a priest and a choirmaster. (Not to be confused with horror shlock flick Silent Night, Bloody Night).

What’s the story? A kind-hearted banker (James Stewart) contemplates suicide on Christmas Eve until a guardian angel shows him how much worse the world would have been had he never been born.

Christmas hook: The timing is Christmas, and the message of the impact of our goodness on others—a recurrent theme in director Frank Capra’s movies—ties in with Christian ethics.

What’s the story? Scottish, French and German soldiers in the trenches of World War I spontaneously cease fire on Christmas Eve when they hear the enemy singing Christmas carols.

Christmas hook: The Prince of Peace reigns, if only for a short while before the killing resumes.

What’s the story? Santa Claus must convince doubters that he is real.

Christmas hook: The film not just criticises but also satirises the commercialisation of Christmas, and calls us to have faith even when everybody else doubts.

What’s the story? Apparently the first-ever Hollywood film about the Nativity of the Lord. Though told from a perspective of Protestant theology, it is reverent and premiered in the Vatican.

What’s the story? Miser Scrooge makes a conversion thanks to visits from chronological ghosts. There are many versions; let’s settle for the one with Alastair Sim as Scrooge.

Christmas hook: Bad guy turns good on Christmas: the redemption we all are capable of.

Christmas hook: All of it, especially Linus reading Luke’s Nativity narrative. “That’s what Christmas is all about, Charlie Brown.”