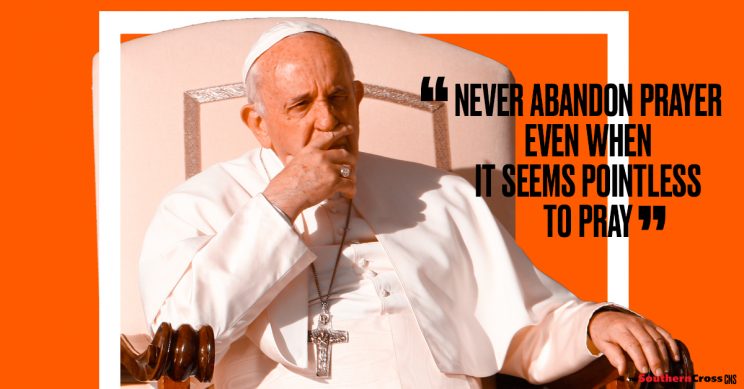 By Cindy Wooden – For Pope Francis, 2019 included his sixth anniversary as pope, his 83rd birthday and his 50th anniversary as a priest, but it was also a year that saw him still confronted with the clerical sexual abuse crisis and with Vatican financial scandals.

Continuing to push the idea of a “synodal Church”—one in which all the faithful are asked to reflect on specific issues and then the bishops gather to discern practical responses together—Pope Francis hosted a special Synod of Bishops for the Amazon and issued his post-synod document on young people, Christus Vivit.

He also declared that the third Sunday of Ordinary Time—January 26 in 2020—would see a global Catholic focus on reading and praying with the Bible, with a new celebration of the “Sunday of the Word of God”.

In Advent, he issued a short apostolic letter on the meaning and value of Nativity scenes as a prompt for prayer and contemplation, and a simple but profound means of evangelisation.

The crèche, he wrote, “teaches us to contemplate Jesus, to experience God’s love for us, to feel and believe that God is with us and that we are with him, his children, brothers and sisters all, thanks to that child who is the Son of God and the son of the Virgin Mary”.

While continuing to teach about the faith, especially about God’s love and mercy, through his homilies at his intimate morning Masses in the chapel of his residence, at visits to Rome parishes and in his Sunday Angelus addresses, Pope Francis was also forced to deal head on with the ongoing scandal of clerical sexual abuse and attempts by bishops to cover up allegations.

Pope Francis’ summit on the abuse crisis took place in February with the heads of every bishops’ conference in the world, the heads of the Eastern Catholic Churches and superiors of men’s and women’s religious orders. For four days, they listened to speeches and survivors’ testimonies, held discussions in small groups, and celebrated a penitential liturgy and Mass.

At the end of the summit, the pope pledged to continue work on eight priorities: the protection of children; “impeccable seriousness” in dealing with clerical sexual abuse; genuine purification and acknowledgment of past failures; improved training for priests and religious; strengthening and continually reviewing the guidelines of national bishops’ conferences; assisting victims of clerical sexual abuse; working to end online exploitation of children; and working with civil authorities to end sex tourism.

Less than three months after the summit, Pope Francis issued Vos estis lux mundi (“You are the light of the world”), a set of revised and clarified norms and procedures for holding bishops and religious superiors accountable in protecting minors as well as in protecting members of religious orders and seminarians from abuse.

The document’s title, from Matthew 5:14, frames the need for true accountability and a serious commitment to ending abuse within the very mission of the Catholic Church.

“Our Lord Jesus Christ calls every believer to be a shining example of virtue, integrity and holiness,” the pope wrote; obviously the opposite occurs when young people and vulnerable adults are abused or when bishops, priests and superiors use their position to harass or abuse seminarians and novices.

Three months after Vos estis was released, Pope Francis reached out to priests around the world outraged by what some priests have done and who have sometimes been attacked publicly because of the crimes of others.

In the letter, published in August in conjunction with the 160th anniversary of the death of St John Vianney, patron of priests, the pope said the crisis must lead to a time of “ecclesial purification” that “makes us realise that without God we are simply dust”.

With the revelations of abuse and cover-up, he said, God “is rescuing us from hypocrisy, from the spirituality of appearances. He is breathing forth his spirit in order to restore the beauty of his bride, caught in adultery”.

The abuse crisis is not the only scandal Pope Francis has been forced to confront in an ongoing manner since his election in 2013.

Vatican financial scandals continue to hit the news, but the pope said the latest scandal shows corrective measures put in place by Pope Benedict XVI and strengthened over the past six years are working.

At the beginning of October, Vatican police conducted a raid on offices in the Secretariat of State and in the Vatican financial oversight office following complaints of financial mismanagement. Five employees were suspended and, as the year ended, an official investigation was ongoing. The case, flagged by the Vatican bank, involves a loan requested by the Secretariat of State to finance a property development in London.

Pope Francis told reporters  that the entire incident shows that the controls now in place to flag suspicious financial activity and possible corruption are working.

December heralded happier notes with the publication of the short apostolic letter on Nativity scenes, the pope’s 50th anniversary of priesthood on December 13 and his 83rd birthday on December 17.—CNS