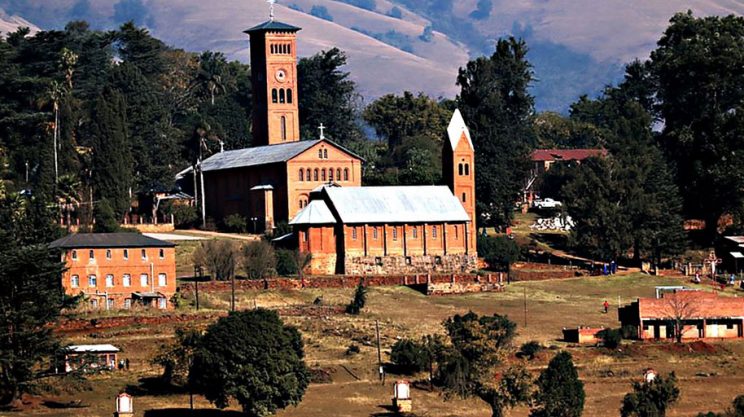 The church is one of the 22 Trappist missions built by Abbot Francis Pfanner, the founder of Mariannhill, in the late 1800s and early 1900s.

To date, the community has managed to raise R200 000 over a period of three years, and with those funds has bought most of the material needed for repairs.

There is still, however, a shortfall of around R145000 needed to pay the contractor, and an additional R200000 needed to repair the main roof.

“The roof tower and main roof of the church are in desperate need of repairs. When it rains, the roof leaks really badly, which means we are unable to use the building for Mass because we can’t sit inside. Some of the beams inside also need to be replaced,” parish priest Fr Ignatius Stankiewicz OSPPE, who has been there for the past 30 years, told The Southern Cross.

He explained that so far, the structure of the three big bells has been repaired; the rotten planks of the tower roof have been removed, replaced, and covered with new iron sheets; and the roof has been fixed in certain areas.

“We are looking for any kind of help we can get,” Fr Stankiewicz said.

Centocow was founded in 1888, when Abbot Pfanner purchased a small farm on the western bank of the Umzimkulu River, in the Creighton district. The abbot named the new station after the famous Polish shrine of Our Lady of Czestochowa. The name of the mission was phonetically simplified into Centocow.

In 1954 the mission was assigned to the diocese of Umzimkulu, and as a result, the Mariannhill Fathers and Brothers as well as the Sisters (except for the hospital) gradually left.

In 1991, the late Bishop Gerard Ndlovu investigated the history of the mission and could see it wasn’t as it used to be. He called on the Pauline Fathers and Brothers from Czestochowa monastery in Poland, begging them to come back and work in this African Centocow.

That’s when it was decided that Fr Stankiewicz would be sent.

Today Centocow mission has become a place of pilgrimage, where members of the Sodality meet regularly to draw spiritual nourishment from the Sacred Heart of Jesus, supported by prayers of Our Lady of Centocow, the Mother of Mercy, and the Mother of Africa.

For more information, or to donate, contact Fr Ignatius Stankiewicz on dziecioly@gmail.com