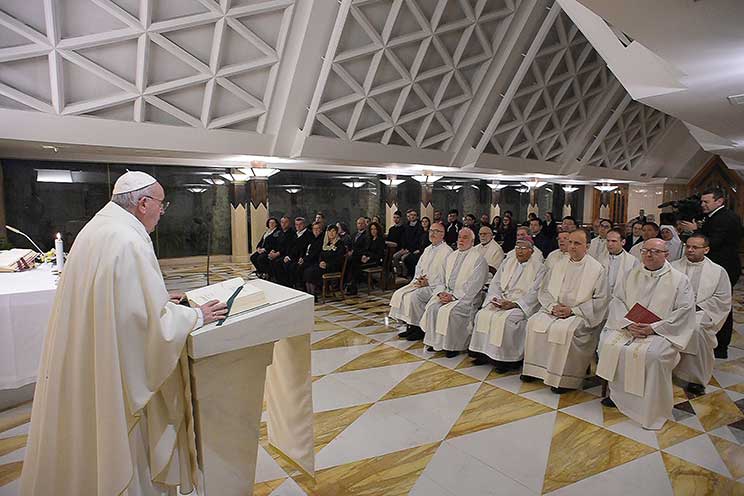 Pope Francis delivers the homily during morning Mass  in the chapel of his Vatican residence, the Domus Sanctae Marthae. During his morning homily the pope said everyone, including himself, has someone to thank God for and someone to whom they should apologise. (CNS photo/Vatican Media)

By Cindy Wooden – Jesus wants his followers to move from a formal observance of God’s commands to an interior acceptance of them and, in that way, to no longer be slaves to sin and selfishness, Pope Francis said.

“He encourages passing from a formal observance of the law to a substantial observance, welcoming the law in one’s heart, which is the centre of the intentions, decisions, words and gestures of each one of us. Good actions and evil ones start in the heart,” the pope said Feb. 16 during his midday Angelus address.

The pope’s comments focused on the Sunday Gospel reading from the fifth chapter of St. Matthew in which Jesus tells his followers, “Do not think that I have come to abolish the law or the prophets. I have come not to abolish but to fulfill.”

While upholding the commandments and laws given to the people by Moses, Jesus wanted to teach people “the proper approach” to the law, which is to recognise it as the instrument God uses to teach his people true freedom and responsibility, the pope said.

“We should not forget this: to live the law as an instrument of liberty that helps me be freer, that helps me not be a slave to passions and sin,” he said.

Pope Francis asked the thousands of pilgrims in St. Peter’s Square to look at the consequences of sin in the world, including the report in mid-February of an 18-month-old Syrian baby girl who died in a displaced persons camp because of the cold.

“So many calamities, so many,” the pope said, and they are the result of people who “do not know how to control their passions.”

Allowing one’s passions to rule one’s actions, he said, does not make someone the “lord” of his or her life, but instead makes that person “incapable of managing it with willpower and responsibility.”

In the Gospel passage, he said, Jesus takes four commandments — about killing, adultery, divorce and making oaths — and “explains the full significance” of them by calling on his followers to fulfill the spirit of the law and not just the letter of the law.

“Accepting the law of God in your heart, you understand that when you do not love your neighbour then to some degree you kill yourself and others because hatred, rivalry and division kill the fraternal charity that is at the basis of interpersonal relationships,” he said.

“Accepting the law of God in your heart,” he added, means learning to master one’s desires, “because you cannot have everything you want, and it is not good to give into selfish and possessive feelings.”

Of course, the pope said, “Jesus knows that it is not easy to live the commandments in this all-embracing way. That’s why he offers the assistance of his love. He came into the world not only to fulfill the law, but also to give us his grace so that we can do the will of God by loving him and our brothers and sisters.”

Pope: Devil Targets Those who Succumb to Despair
Share