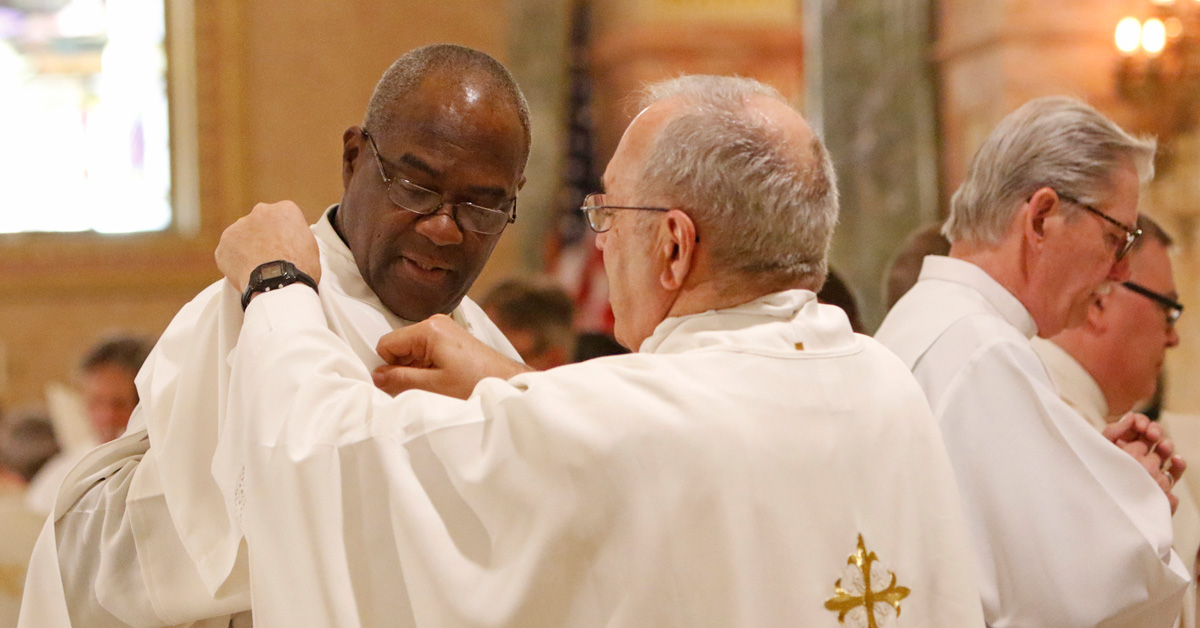 Deacon Francis Cuffie is vested by Msgr. Joseph Malagreca during his ordination to the diaconate at St. Joseph Co-Cathedral in Brooklyn, N.Y. (CNS photo/Gregory A. Shemitz)

The Deacon’s Role in the Parish

Intention for Evangelisation: We pray that deacons, faithful in their service to the Word and the poor, may be an invigorating symbol for the entire Church.

If you want to exercise the Christian virtue of humility, become a deacon.

The deacon often walks in the shadow of another person, usually a priest. Whether he is a permanent deacon or a “temporary” one who will go on to the priesthood, he works with a priest but definitely under his authority, even if given the freedom to use his initiative and discretion in the exercise of his duties.

For “temporary” deacons the problem can sometimes be that the diaconate is seen as a mere stepping stone to the priesthood and so they sometimes chafe under the priestly tutelage.

They should remember that the diaconate is a vocation which, in an important sense, they do not shed or lose when ordained priest.

For a priest will frequently be asked to render the kinds of services asked of deacons—ranging from effective administration of money and parish assets to picking up an elderly parishioner en route to Mass at the outstation.

I myself spent almost a year as a deacon and worked for the youth service of a large diocese in the UK. I was based in an innercity parish.

It was a busy and fulfilling time. There were opportunities for preaching, and as a deacon, since one cannot say Mass, the tendency is to work harder at one’s homilies and, as the intention says, “fulfil one’s faithful service to the Word”.

Hence to take a “diaconal attitude” forward into one’s priesthood can enrich it immensely. This is an argument for an extended diaconate for those moving towards priestly ordination rather than a brief interlude between the end of theology and priestly ordination.

The permanent deacon, who is usually married, also commits himself to service, but without the future prospect of the priesthood.

This can be hard at times, especially if the incumbent parish priest isn’t keen on sharing his thunder with someone who might have predated him in the parish by many years.

The deacon may be older than the priest, have far more pastoral experience, and may know the parish much more intimately.

In effect, how much the deacon can do in a parish is according to the grace and favour of the parish priest, which is a very humble and vulnerable position to occupy.

This position is shared by his family members who make great sacrifices for the sake of the deacon’s vocation. If we return to the picture drawn of the first deacons in the Acts of the Apostles, it is clear that they were not intended to function as quasi-priests.

Their role was to wait on the tables where the poor widows were fed. It seems to me to be important for deacons, whether “temporary” or permanent, to keep in touch with this tradition of practical and humble service of God’s people, especially the needy among them.

Pope Francis, when he was as Fr Jorge Bergoglio the superior of the Jesuit house of studies in Buenos Aires, was exemplary in this. Though he was the rector and a priest as well as a teacher in the college, he used to participate in the practical running of the institution’s farm, sometimes going around in his gumboots feeding pigs.

At the same time Fr Bergoglio managed to reach out to the poor people of the area and do the kinds of diaconal service that we read about in Acts.

And he encouraged the young Jesuit students to do the same. In this time of coronavirus with the lockdown and, hopefully soon, post-lockdown, we have an opportunity as a Church to reinvigorate the meaning of diaconal service.

How this can be done in practice will take a great deal of imagination and an intimate knowledge of the circumstances of the local Church.

But there are undoubtedly many new needs around as a result of the pandemic: families struggling with unemployment or shorter hours, some facing actual hunger, health workers needing emotional and spiritual support, priests needing practical ways of communicating with the People of God through the internet.

Wherever a deacon can put his shoulder to the wheel under these circumstances, he can make a difference in people’s lives. Just phoning up parishioners to ask how they are coping would count as diaconal service in this difficult time.