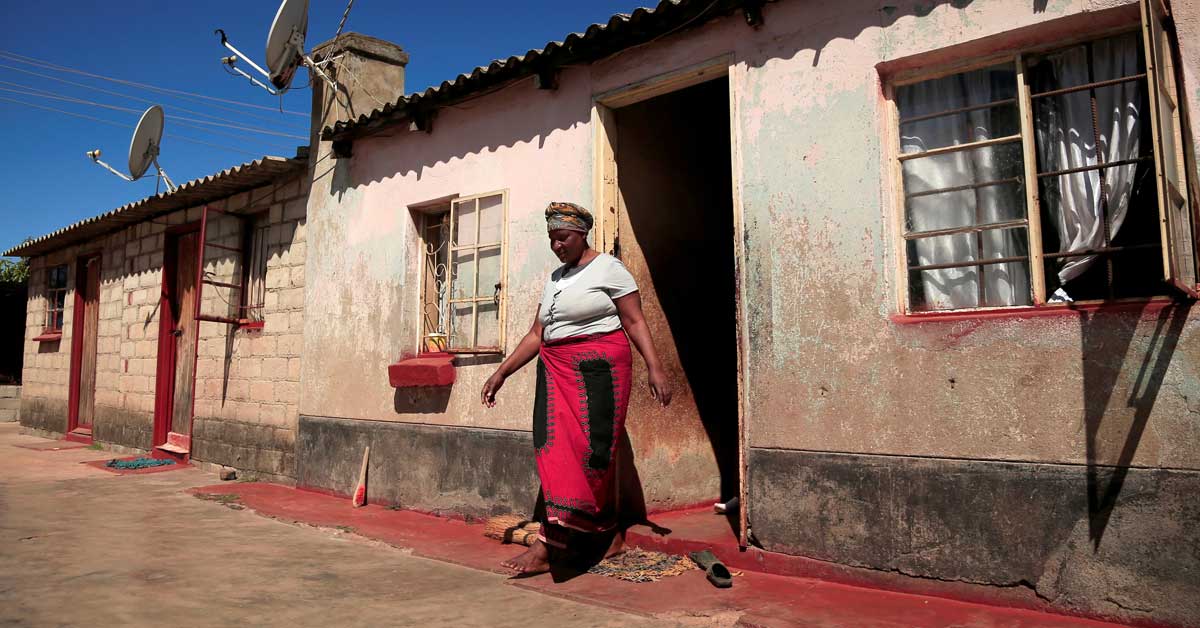 A woman walks out of her family home in Harare, Zimbabwe, during the Covid-19 pandemic. Church officials and experts say domestic violence in Africa is rising during government-enforced measures to fight COVID-19. (CNS photo/Philimon Bulawayo, Reuters)

By Fredrick Nzwili – On the night of May 9, Edward Okello, an aeronautical engineer, died when a kitchen knife was plunged into his chest. Vigilance Shighi later said she did not know how the weapon hit her boyfriend, who had beaten her.

Such incidents are removing the veil of domestic violence, which church officials and experts say is rising during government-enforced measures to fight Covid-19. Now, African Catholic leaders want the crimes tackled.

“We need to address the matter urgently. I think fear, panic and anxiety related to COVID-19 measures are to blame,” Father Josiah Muthee Mugera, executive secretary of the Kenyan bishops’ commission for the lay apostolate, told Catholic News Service.

Most African governments announced lockdowns and curfews in March, barred visits to public places and shut places of worship, including churches and mosques. They also confined children at home with their parents after shutting down schools.

Church officials said the measures caught many in the continent by surprise. The confinement has triggered stress among the people while increasing tensions in homes, creating a fertile ground for domestic and sexual violence. At the same time, fears around loss of jobs and financial stress are increasing the likelihood of violent conflicts at home, officials said.

“Many of the couples were not prepared for these changes. They have caused a lot of emotional imbalance and hopelessness. The people are now reacting, instead of acting … there is a lot of hopelessness,” said Father Mugera, who also said churches must work on their marriage formation programs for couples.

“This period of coronavirus has brought members of the family together,” he said in a video message. “And this has brought also other effects – the effects of domestic violence, on (the) increase in some cases.”

The South African Council of Churches said the cases of domestic abuse in the region had reached frightening levels, with the survivors living in lockdown with their abusers.

On May 9, the council released a pastoral letter in which it urged all its members, including the Catholic bishops’ conference, to form ecumenical family support units in all communities.

Bishop Victor Phalana of Klerksdorp said the bishops’ justice and peace commission has moved to focus on changing men’s behaviour in efforts to tame the violence.

Zimbabwe’s lockdown began March 30. In two weeks, more than 800 cases were reported in Harare, the capital. This was way above the normal 500 cases reported in each month, according to the social services organisation Musasa Project.

In May, Bishop George Zumaire Lungu, president of the Zambian bishops’ conference, urged the country’s Christians to shun violence and use the lockdown period to consolidate family ties.

“This is the time when families need to sober up, unite and allow the nation to fight the common enemy, Covid-19,” the bishop said.

The bishop was reacting the reports by a national association of women’s organisations that, among the increasing cases of violence, three women have been killed by their spouses and one raped by a medical practitioner in the capital, Lusaka.

“Whether or not the advent of Covid-19 in Zambia and the lockdown measures put in place to address the situation have led to … cases, what is clear is that the nation is recording a surge in cases in the wake of Covid-19,” said Mary Mulenga, chairwoman of the Non-governmental Gender Organisations’ Coordinating Council.

In the six-week stay-at-home order, Nigeria’s National Agency for the Prohibition of Trafficking in Persons has recorded increased cases of rape, incest and domestic abuses.

“I think some men are suffering from cabin fever. They are not used to staying at home with their wives. So, the more their wives are in their faces, the more they get angry and beat them up. We recorded over 30 cases in a certain period,” said Julie Okah-Donli, NAPTIP director-general.

Although no public cases of domestic violence have been recorded in Ghana, some experts in the country believe the crimes are occurring.

Miriam Rahinatu Iddrisu, a Catholic sociologist, said the cases are less likely to be reported in the West African country due to the male-controlled Ghanaian society.

“Although there might some cases of domestic violence, the victims might not be willing to make a formal report,” she said.