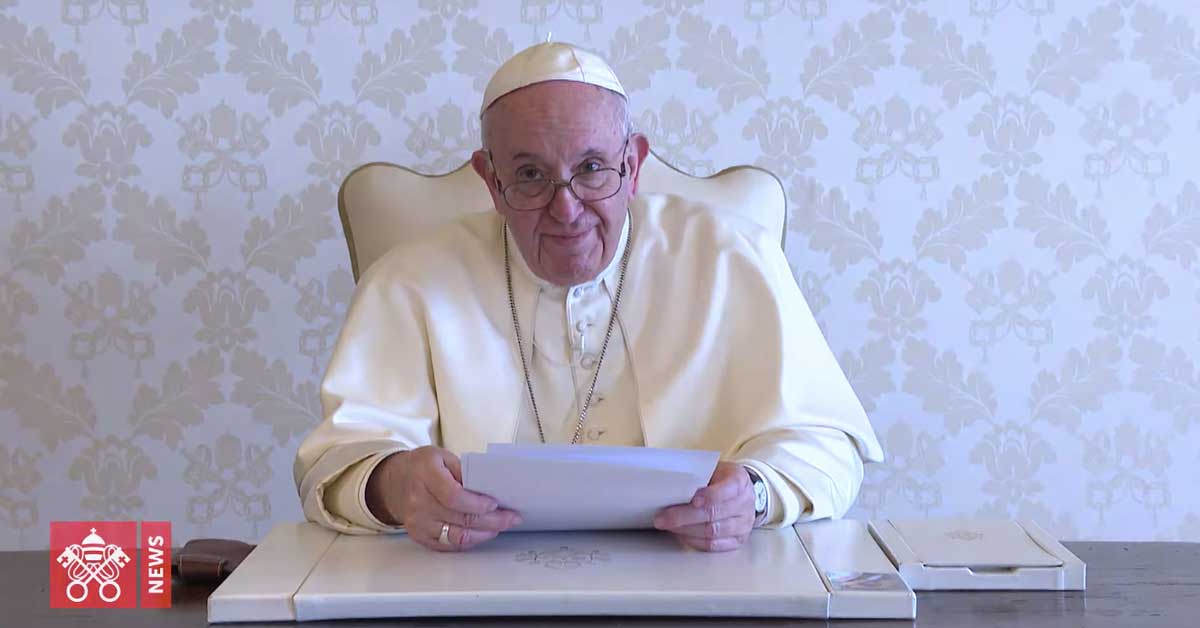 Pope Francis speaks from the Vatican in this image taken from a video message to young people of the Archdiocese of Krakow, Poland, commemorating the 100th anniversary of St. John Paul’s birth. (CNS photo/Holy See Press Office)

By Junno Arocho Esteves – Young men and women today can learn from the example of St. John Paul II, who proved that life’s difficulties are not an obstacle to holiness and happiness.

Despite losing his mother, father and brother at a young age and experiencing the atrocities of Nazism and atheistic communism, St. John Paul passed the “test of maturity and faith” and chose to rely “on the power of Christ, who died and rose again,” the pope said in a May 18 video message to young people in Poland.

The message, which was sent to mark the 100th anniversary of St. John Paul’s birth, was addressed to young people of the Archdiocese of Krakow, where then-Cardinal Wojtyla served as archbishop from 1964 until his election to the papacy in 1978.

The centennial celebration, the pope said, was a “beautiful opportunity” to address young people whom St. John Paul “loved very much.”

“St. John Paul II was an extraordinary gift of God to the church and to Poland, your homeland,” he said. “His earthly pilgrimage, which began on May 18, 1920, in Wadowice and ended 15 years ago in Rome, was marked by a passion for life and a fascination for the mystery of God, the world and man.”

Recalling St. John Paul’s 1980 encyclical “Dives in Misericordia” (“Rich in Mercy”), as well as his canonisation of St. Faustina Kowalska and his institution of Divine Mercy Sunday, Pope Francis said he remembered his predecessor “as a great one of mercy.”

“In the light of God’s merciful love, he grasped the specificity and beauty of the vocation of women and men; he understood the needs of children, young people and adults, taking into consideration cultural and social conditions,” he said.

Pope Francis called on young people to use today’s technology to learn about St. John Paul, his life and his teachings, and he expressed his hope that, like the Polish saint, they may “enter into Christ with your whole life.”

“I hope that the celebrations of the centenary of St. John Paul II’s birth will inspire in you the desire to walk courageously with Jesus, who is ‘the Lord of risk, the Lord of the eternal ‘more,'” the pope said.