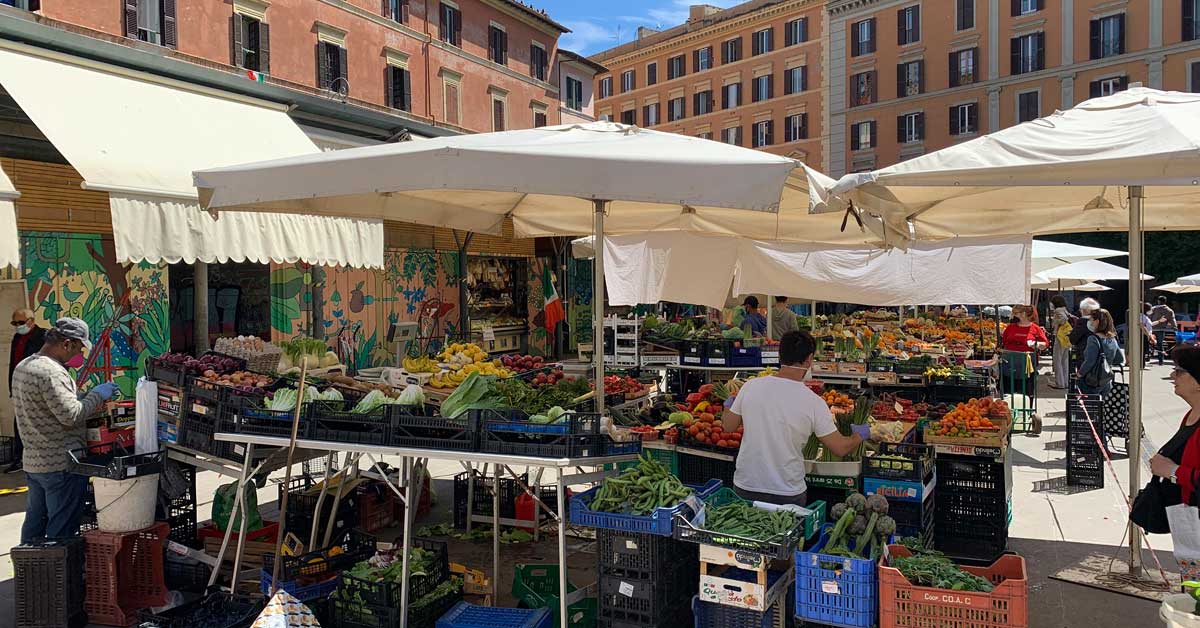 Vendors sell produce in the open-air San Cosimato market in Rome’s Trastevere neighbourhood May 8, 2020. Many of the stall owners are struggling after weeks of a government-ordered lockdown to prevent the spread of the coronavirus. (CNS photo/Cindy Wooden)

By Cindy Wooden – In Rome’s historic Trastevere neighbourhood, and throughout Italy, the easing of the coronavirus lockdown not only meant disinfecting shops, coffee bars and restaurants, it also involved tons of garbage and composting.

“I threw away a lot of food. I don’t want to calculate the value because it’s just too depressing,” said Emiliano Gismondi, who runs Settecento, his family’s meat and cheese stall in the open-air market at Piazza San Cosimato.

His grandfather opened the stall in 1921. His parents ran it for years, and now it is his turn. He and his nephew, Daniele, help customers choose between different kinds of prosciutto, salami and cheeses, including fresh mozzarella made from the milk of water buffalo.

While Italy’s lockdown was eased May 4, the Gismondi family opened three weeks earlier under special provisions for food shops. The stall was closed for three weeks as the city and the market vendors figured out a system for ensuring social distancing and hired a monitor to make sure there was only one customer at a time at each stall.

Gismondi is grateful for the clients who have returned, including some he had not seen for years once several large supermarkets opened in the area.

“The pandemic has reminded us that personal choices are not just personal, they are social choices that impact the common good,” said Brian Henning, a professor of philosophy and environmental studies at Gonzaga University in Spokane, Washington.

“The choices we make, including shopping choices, but also decisions about whether and when to observe social distancing and wear personal protective equipment, directly impact others in our community,” Henning told Catholic News Service. “Let us all come together as members of the human community to support our friends and neighbours through these difficult times and build together a society marked by justice and respect, both for our poorest brothers, but also for sister Earth.”

Msgr. Marco Gnavi, pastor of the Basilica of Santa Maria in Trastevere, said Gismondi is one of the lucky ones in his neighbourhood.

“There is a lot of concern about the future, a lot of small businesses on the verge of collapse,” he said. And without those small shops, restaurants and coffee bars, unemployment will rise, and the neighbourhood will lose its character.

“Our quality of life depends on how we relate to our neighbours,” the priest said. “And being a good neighbour is to act in solidarity.”

Msgr. Gnavi said he has been impressed and grateful that since the lockdown began, dozens and dozens of people in the neighbourhood have volunteered to help with the distribution of food to struggling neighbours. With the Community of Sant’Egidio, which is based at the basilica, the parish has been distributing 500 bags of food each week.

Zakir Hossain and his wife have run a little flower shop in Trastevere for the past 10 years. The tiny shop was packed full of cut flowers and plants when the lockdown began abruptly in early March.

When he reopened, he said, “everything was dried out, dead. We had to throw most of it away.”

Hossain estimated that 80% of his customers live in the neighbourhood, and although people are only slowly leaving their homes, he is counting on them to help him get back on his feet. And he’s offering them a good selection of tomato seedlings, including little Piccadilly tomato plants that already have yellow blossoms.

Salesian Sister Alessandra Smerilli, an economist and papally appointed consultant to the Pontifical Commission for Vatican City State, noted that Pope Francis, in his encyclical “Laudato Si’, on Care for Our Common Home,” quoted Pope Benedict XVI in saying, “Purchasing is always a moral – and not simply economic – act.”

Sometimes, she said, buying from a small shop or supporting a small farmer will cost more. “I don’t have to pay for inefficiency, but I must pay for my respect for human labour and respect for the environment.”

Solidarity also means assisting those most impacted by the Covid-19 pandemic, Sister Smerilli said. Just as people respected the tight lockdown to protect themselves, their families and, especially the elderly who were most at risk, now they should help businesses – and their employees – who are suffering most.

The big online shopping services did not suspend service, and in many cases, experienced a booming business, but the neighbourhood shops did not, she said. “So, now if I want to live with a spirit of solidarity, it is important that I make my purchases from those who are experiencing the severe consequences of the pandemic.”

One person’s purchases may have a very small impact, she said, “but if many of us do it, it is no longer just a drop in the ocean.”

“Acting this way also increases our own sense of dignity,” Sister Smerilli said. “It does us good to be able to say, ‘When I make a purchase, I’m also helping to change the world and support an economy that is respectful of the human person and the environment — and my neighbours.'”