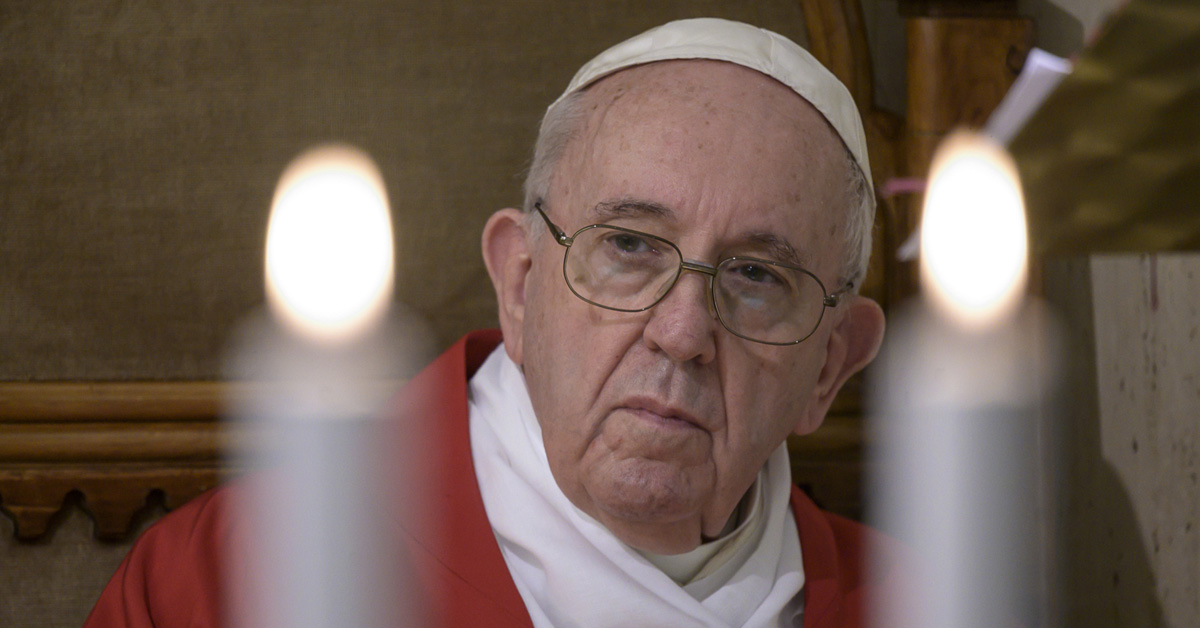 Pope Francis listens to the Scripture readings during Mass May 14, 2020, in the chapel of his Vatican residence, the Domus Sanctae Marthae. The Mass was part of Pope Francis’ observation of an interreligious day of prayer, fasting and acts of charity, asking God to free the world from the coronavirus pandemic. (CNS photo/Vatican Media)

By Cindy Wooden – At a time of global “tragedy and suffering” because of the coronavirus, and in view of the long-term impact it will have, believers of every religion should beg mercy from the one God and father of all, Pope Francis said.

During his early morning Mass, Pope Francis joined leaders of every religion marking May 14 as a day of prayer, fasting and acts of charity to ask God to stop the coronavirus pandemic.

Some people might think, “‘It hasn’t affected me; thank God I’m safe.’ But think about others! Think about the tragedy and also about the economic consequences, the consequences on education,” the pope said in his homily.

“That is why today everyone, brothers and sisters from every religious tradition are praying to God,” he said.

The day of prayer was called for by the Higher Committee of Human Fraternity, an international group of religious leaders formed after Pope Francis and Sheikh Ahmad el-Tayeb, grand imam of al-Azhar, signed a document in 2019 on promoting dialogue and “human fraternity.”

During the pope’s Mass, livestreamed from the chapel of the Domus Sanctae Marthae, he said he could imagine some people would say that gathering believers of all religions to pray for a common cause “is religious relativism, and you can’t do it.”

“But how can you not pray to the Father of all?” he asked.

But Pope Francis also asked people to look beyond the coronavirus pandemic and recognise that there are other serious situations bringing death to millions of people.

“In the first four months of this year, 3.7 million people died of hunger. There is a pandemic of hunger,” he said, so when asking God to stop the Covid-19 pandemic, believers should not forget the “pandemic of war, of hunger” and so many other evils spreading death.

“May God stop this tragedy, stop this pandemic,” he prayed. “May God have mercy on us and also stop other awful pandemics: those of hunger, war, children without education. And we ask this as brothers and sisters, all together. May God bless us and have mercy on us.”