There’s A Place For Film In Catechesis, Catholic Filmmakers Declare 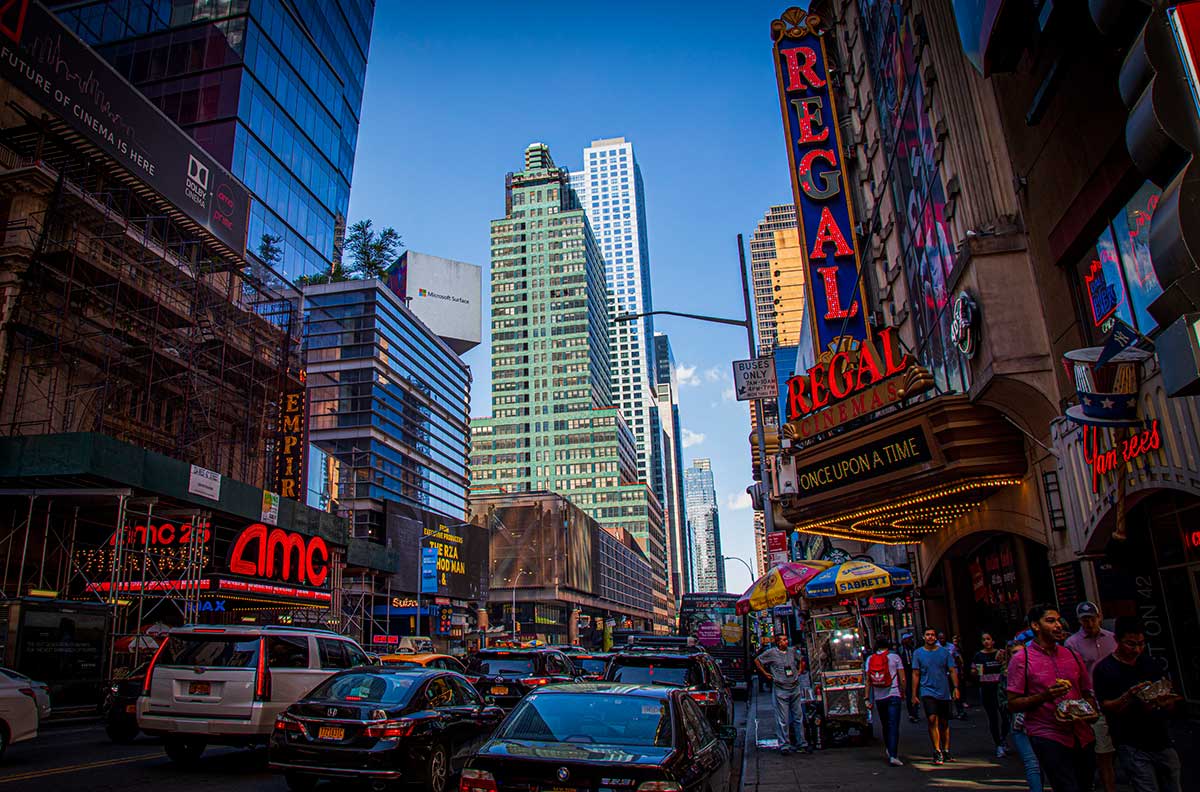 Pedestrians walk by two iconic movie theaters along New York’s 42nd Street — the Regal and the AMC Empire — Sept. 15, 2019. Catholic filmmakers say film and video can be used as a tool for catechesis. (CNS photo/Chaz Muth)

“It’s one thing for a man or a woman to film themselves giving a letter, giving a teaching,” said Doug Tooke, vice president of ministry development at ODB, an acronym for “Outside Da Box.” “The power of story as a means of invitation to relationships and conversation is much more difficult. ”

Tooke added, “Shooting narratives for use with catechesis is harder,” but worth the effort.

He was joined by ODB president Eric Groth and lead producer Katie Reidy, who is co-producer of a 30-minute documentary in ODB’s “Restored” series that was shown during their May 14 presentation as part of the National Conference on Catechetical Leadership’s online “Witness” conference.

ODB made the feature films “Full of Grace” and “Paul, Apostle of Christ.” “We’re all called to that – to live our life of holiness, to strive for sainthood,” Groth said. But “those saints feel so far off in the distance, and unattainable.”

The point of the “Restored” series is to show “blue-jean saints” in the community, Groth added. “They’ve encountered Christ and they’re living out that Gospel in some heroic way – but in a way that we all can attain.”

He said, “We’re trying to connect that, and show it practically.”

The film Reidy co-produced focuses on Alan Graham. He grew up in a broken home in Houston, but his single mother had him and his brothers baptized as Catholics. Graham, by his own admission, was a juvenile delinquent when he reached his teenage years, but shucked that off and became a real estate tycoon in Austin, Texas.

At his personal financial zenith, Graham returned to his Catholic faith, cast all his success aside and set out to help Austin’s homeless through an initiative called Community First Village. When the latest phase is completed, there will be trailer homes, “tiny houses” and other dwellings for up to 500 people — the formerly homeless and citizens who offer life skills and job training. They live, eat, work and worship alongside their once-homeless brothers and sisters.

“Their personal stories are so powerful, we knew just by interviewing them we’d get pieces we could use in ministry no matter what,” Reidy said. “To show one person’s yes to God doesn’t happen in a vacuum.”

Reidy illustrated her point with a scene showing Graham and Robin, a formerly homeless woman. “She’s a woman who has gone through so much,” Reidy said of Robin. “Now Alan’s faith changed her, and brought her to believe in God. The ripple effect is incredible.”

“We really want to lead with beauty, and show beautiful things and experiences. We’re not just talking about the beauty of a truth, but the beauty of relationships,” Groth said.

ODB is “a ministry first, a film company second,” Tooke said. “We have no intention of making films that replace relationships,” he added. “We’re not interested in video catechesis — and call that a formative program. I think it’s a mistake. I think it’s hurt discipling.”

Using a play on the Latin “lectio divina” – “divine reading” in English – the practice of scriptural reading, meditation and prayer, Tooke said they want their films to be considered a “video divina.”