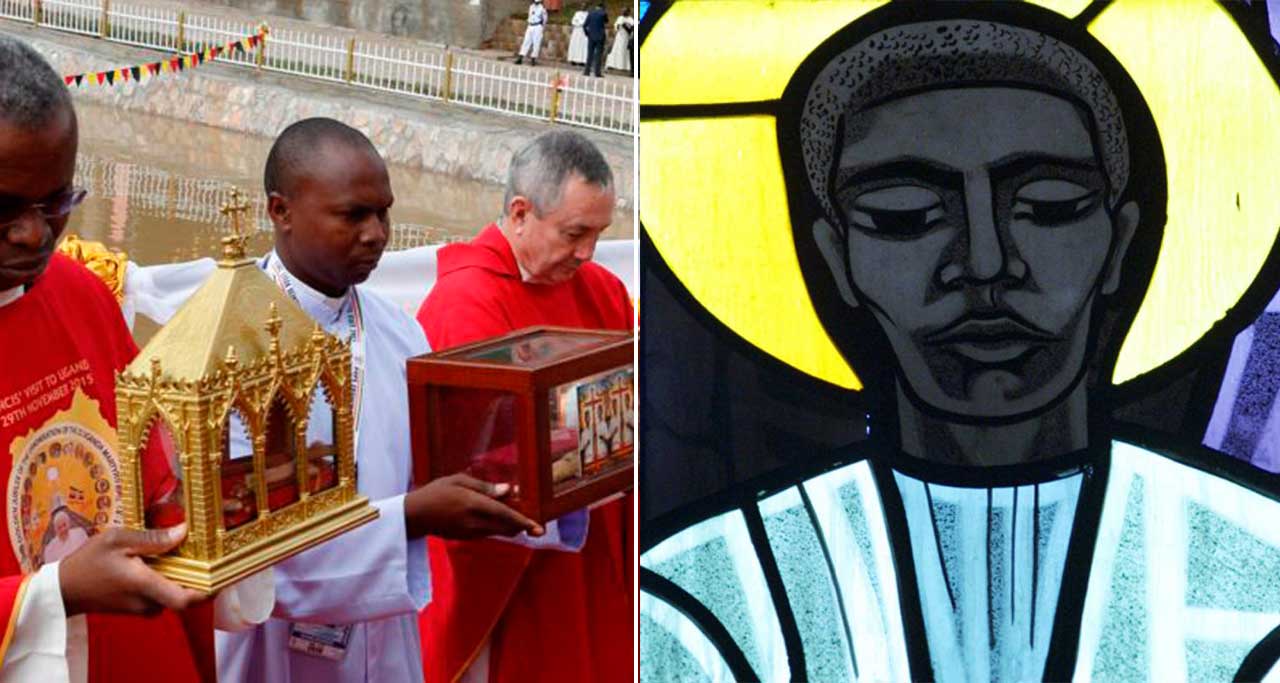 Relics of the Uganda Martyrs are carried in procession at the start of Pope Francis’ celebration of Mass in 2015 at the Catholic shrine at Namugongo in Kampala, Uganda. (CNS photo/Paul Haring) St Charles Lwanga is depicted in a window at St. Jerome Church in Hyattsville, Md. He was among the Uganda Martyrs, whose feast is June 3. (CNS file photo)

By Godfrey Olukya – At the annual Uganda Martyrs Day Mass, shared through video, Catholics were urged to remember two nuns who were healed of bubonic plague through the martyrs’ intercession.

Archbishop Cyprian Kizito Lwanga of Kampala asked Catholics around the world to pray for an end to COVID-19 through the intercession of the Uganda Martyrs. The martyrs are a group of 22 Catholic and 23 Anglican converts to Christianity in the historical kingdom of Buganda, now part of Uganda; they were executed in the late 1800s.

The pilgrimage to the Catholic shrine at Namugongo, near Kampala, started 100 years ago after the beatification of the martyrs, the archbishop said. In his livestreamed sermon for the June 3 celebration, he told the story of the sisters’ cure.

In 1941, two sisters buried one of their fellow nuns who had died of bubonic plague while at the convent for the Missionary Sisters of Our Lady of Africa in Kampala. The two sisters became infected and “everyone knew they would die,” Archbishop Lwanga said. “Miraculously, they were cured,” he said, noting Vatican-commissioned specialists concluded that not only was the medicine the nuns were taking ineffective, but that even if it had been effective, it could not have restored their health in such a short time.

Apart from Ugandans and pilgrims from neighbouring countries, people from as far away as the United States, Mexico, Italy, Ireland, Singapore and Canada have attended Mass at the shrine in previous years.

This year, “only 60 people were invited to attend” the celebration, which had as its theme “With faith and love we shall overcome,” said Father Joseph Okot, who was stopped from leading Catholics from around Uganda to the shrine by the country’s COVID-19 lockdown.

Two years ago, more than 2 million people attended the feast day Mass, according to police.

The Catholic martyrs were beatified in 1920 and canonised in 1964. A basilica was constructed at Namugongo, where the martyrs were killed, and later several other structures were put in place to accommodate people who arrive to celebrate the day. An Anglican shrine to the martyrs is just over a mile away from the Catholic shrine.

The martyrs were executed on the orders of King Mwanga II. Witnesses recorded the deaths, detailing how they were chopped by axes and later burned in fire. Some reportedly died while singing songs praising God.